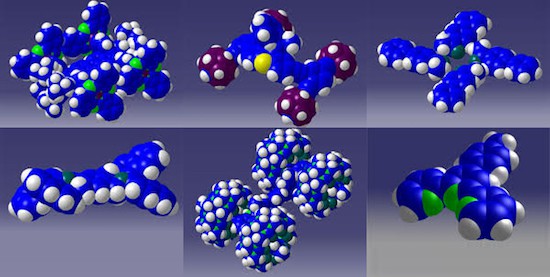 Twenty years ago Dr. Christian Joachim of CEMES=CNRS (France) shared the 1997 Foresight Feynman Prize in Nanotechnology for Experimental Work with two researchers then at IBM Research Zurich for work using scanning probe microscopes to manipulate molecules. Eight years later he won 2005 Foresight Feynman Prize in Nanotechnology for Theory for developing theoretical tools and establishing the principles for design of a wide variety of single molecule functional nanomachines. For the past few years he has been organizing the first ever international nanocar race which will provide an arena to test half a dozen very different designs for vehicles comprising only several dozen atoms each to race along a 100-nm course powered by electrical pulses from an STM tip. The races will be held April 28-29 in Toulouse, France. From a CNRS March 13 news release “The world’s first international race for molecule-cars, the Nanocar Race is on“:

Nanocars will compete for the first time ever during an international molecule-car race on April 28-29, 2017 in Toulouse (south-western France). The vehicles, which consist of a few hundred atoms, will be powered by minute electrical pulses during the 36 hours of the race, in which they must navigate a racecourse made of gold atoms, and measuring a maximum of a 100 nanometers in length. They will square off beneath the four tips of a unique microscope located at the CNRS’s Centre d’élaboration de matériaux et d’études structurales (CEMES) in Toulouse. The race, which was organized by the CNRS, is first and foremost a scientific and technological challenge, and will be broadcast live on the YouTube Nanocar Race channel. Beyond the competition, the overarching objective is to advance research in the observation and control of molecule-machines.

More than just a competition, the Nanocar Race is an international scientific experiment that will be conducted in real time, with the aim of testing the performance of molecule-machines and the scientific instruments used to control them. The years ahead will probably see the use of such molecular machinery—activated individually or in synchronized fashion—in the manufacture of common machines: atom-by-atom construction of electronic circuits, atom-by-atom deconstruction of industrial waste, capture of energy…The Nanocar Race is therefore a unique opportunity for researchers to implement cutting-edge techniques for the simultaneous observation and independent maneuvering of such nano-machines.

The experiment began in 2013 as part of an overview of nano-machine research for a scientific journal, when the idea for a car race took shape in the minds of CNRS senior researcher Christian Joachim (now the director of the race) and Gwénaël Rapenne, a Professor of chemistry at Université Toulouse III – Paul Sabatier. Three years later, the nanocars are operational and ready to face off on the circuit’s gold surface. There were numerous challenges in organizing this race, from selecting the racecourse, which must accommodate all types of molecule-cars, to adapting the scanning tunneling microscope. The participating teams also had to overcome a series of difficult tasks (depositing and visualizing the molecules beneath the microscope), as well as meet numerous criteria (the molecules’ structure and form of propulsion) in order to participate in this race. Of the nine teams that applied before the end of May 2016, six were selected, and four will take their place at the 4-tip microscope’s starting line on April 28, 2017 for the 36-hour race in Toulouse.

The challenges facing researchers in the race will be so many steps forward in novel fields in chemistry and physics. In the process, each team will build up new skills, data, and know-how that will one day contribute to the development of surface chemistry (which enables chemical synthesis directly on a particular surface), or in the new science of surfaces known as membrane science, which makes it possible to deposit a molecule-machine on the surface of a cell, or to control the movement of a single molecule in a liquid.

The CEMES-CNRS microscope is the only one in the world allowing four different experimenters to work on the same surface. The development of such multi-tip microscopes will enable synchronizing a great number of molecule-machines in order to increase capacity, for instance for storing energy or capturing it from a hot metallic surface. A genuine “atom technology” is dawning.

The rules of the race: 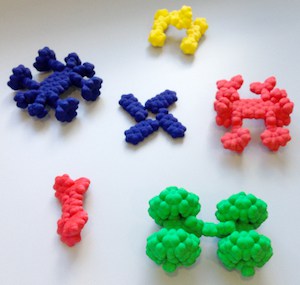 For more information, including where to watch the race on April 28, 2017 in Livestream or on YouTube or Facebook: http://nanocar-race.cnrs.fr/indexEnglish.php

Additional details about the gold nano-track, the placement of gold adatoms about which the nanocars must manuever, allowed methods of propulsion, and the six teams that have entered the competition can be found here.

The six teams and their vehices:

Casual inspection of the images of the six vehicles entered in this competition reveals that they differ substantially in size, shape, and design. It will be interesting to see
how these various designs perform under uniform conditions, and if general principles emerge to guide the design of various molecular machines.
—James Lewis, PhD