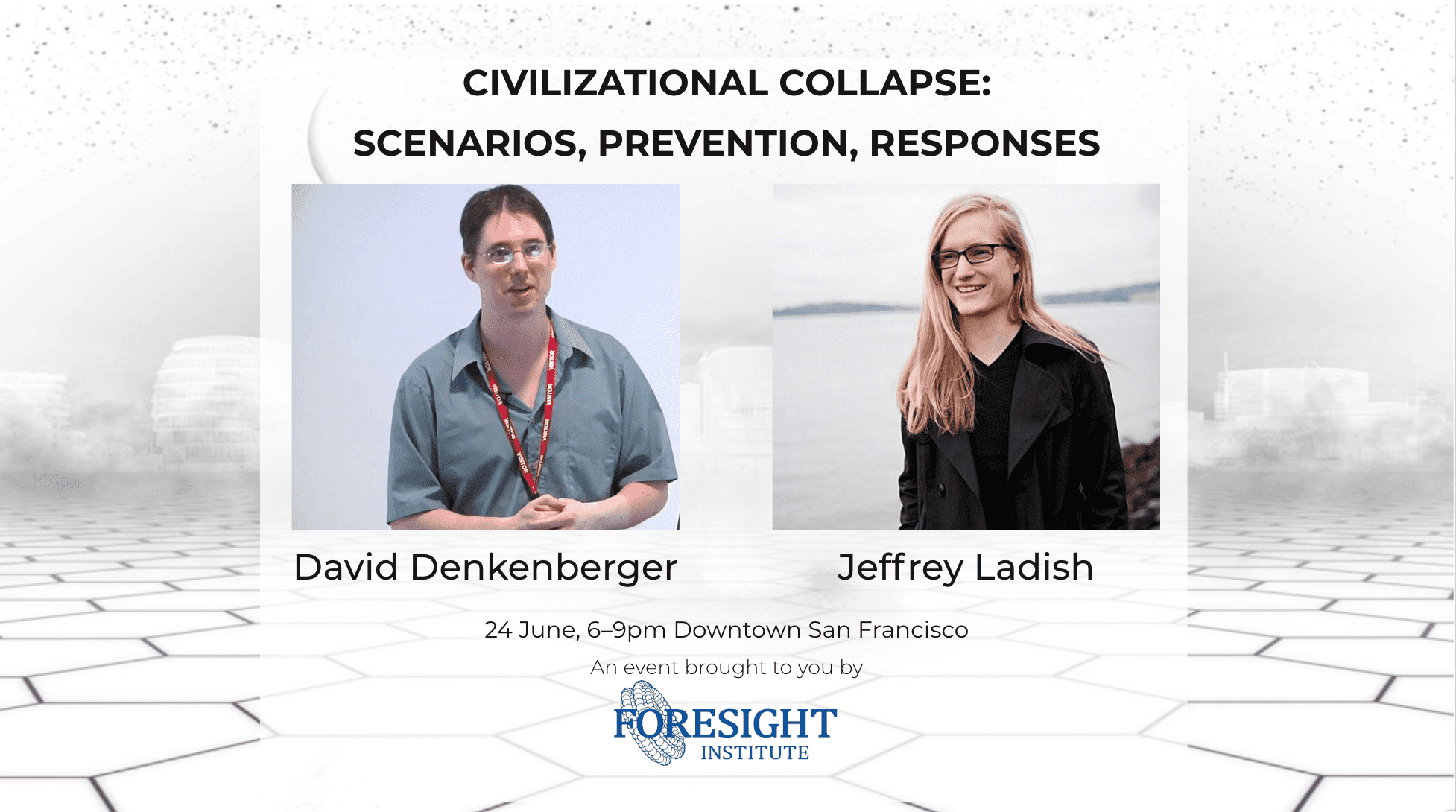 Interventions to prevent the collapse of civilization due to a pandemic include preparations for the rapid scaling of soap, disinfectant, facemasks, and gloves. Interventions to prevent the loss of anthropological civilization (cooperation outside of tribes) if there is a loss of industrial civilization on the food side include growing many crops that fix nitrogen from the air and burning wood in landfills for other fertilizer. Ships could be retrofitted to be wind powered and cows could pull railcars of people/food. Interventions to prevent the loss of civilization given the blocking of the sun include mushrooms growing on dead trees, retrofitting chemical plants to turn leaves into sugar and natural gas into single cell protein. Plan C is a refuge to repopulate the earth. This could be in space, underground, or in the form of submarines.

Dr. David Denkenberger received his B.S. from Penn State in Engineering Science, his masters from Princeton in Mechanical and Aerospace Engineering, and his Ph.D. from the University of Colorado at Boulder in the Building Systems Program. His dissertation was on his patented expanded microchannel heat exchanger. He is an assistant professor at University of Alaska Fairbanks in mechanical engineering. He co-founded and directs the ALLiance to Feed the Earth in Disasters (ALLFED) and donates half his income to it. He received the National Merit Scholarship, the Barry Goldwater Scholarship, the National Science Foundation Graduate Research Fellowship, is a Penn State distinguished alumnus, and is a registered professional engineer. He has authored or co-authored 95 publications (>1400 citations, >50,000 downloads, h-index = 18), including the book Feeding Everyone no Matter What: Managing Food Security after Global Catastrophe. His food work has been featured in over 25 countries, over 200 articles, including Science, Wikipedia, Discovery Channel Online News, Gizmodo, Phys.org, and Science Daily. He has given interviews on 80,000 Hours podcast and Estonian Public Radio, WGBH Radio, Boston, and WCAI Radio on Cape Cod, USA. He has given over 90 technical presentations, including ones on food at Princeton University, University of California Los Angeles, Lawrence Berkeley National Lab, Sandia National Lab, Los Alamos National Lab, Cornell University, Imperial College, University College London, University of Cambridge, and University of Oxford.

Since the development of nuclear weapons, humans have faced the possibility of a collapse of global civilization. There have been many close calls, most notably during the Cuban Missile Crisis, when a Vasili Arkhipov prevented another Soviet officer from launching a nuclear torpedo, possibly starting the third world war. While the threat of a war between major powers has ebbed and flowed, it has remained true that only a miscalculation stands between civilization and nuclear war. Unfortunately, while the US and Russia has made progress in decreasing the total number of nuclear weapons, there has been no progress towards a long lasting solution to the nuclear standoff. As technology develops, state and non-state actors increase their capacity for destruction without any increase in their capacity for international coordination, leading to a dangerously fragile equilibrium.

Emerging technologies further increase the uncertainty and risk of a global collapse. Developments like CRISPR and lab automation technologies could lead to more effective biological weapons deployed by both state and non-state actors. Greater automation and speed of offensive weapons–drones, autonomous subs, and hypersonic missiles–decrease the possible response time in the lead up to a nuclear conflict, making risk of miscalculations more severe. This in turn incentivizes states to automate more offensive capabilities, further contributing to the risk of cyber attack or failures of automation.

While over two thousand nuclear weapons have been tested, we have very little idea what would actually happen in a nuclear conflict. Alan Robock and Owen Toon have published models showing drastic global cooling in the event of a large scale nuclear exchange, and still significant effects from a limited regional nuclear exchange, such as that between Pakistan and India. Several congressional investigations have found that EMP effects from even a single nuclear weapon detonated above the eastern United States could disable the power grid and cripple industry. All these models exhibit a great deal of uncertainty — would cities exhibit the kind of firestorm dynamics necessary to loft material into the upper atmosphere to create lasting climate effects? Would critical industrial control systems be irreparably be damaged by EMP effects? The uncertainties in these models leave open major questions relevant to understanding collapse dynamics.

Reducing the uncertainty in global collapse scenarios is an important early step in making plans to improve civilizational resilience. In this talk, I will outline some of the key uncertainties in global risk models, and explain how these uncertainties could be reduced with directed research and cross-disciplinary collaboration.

Jeffrey Ladish is an independent researcher and security consultant based in San Francisco, California. He has written and spoken about threats from the intersection of emerging technologies and great power conflict. He has spoken at Defcon, the Stanford Center for International Security and Cooperation, East Bay Biosecurity, and Effective Altruism Global. Jeffrey has previously worked as chief security officer for Reserve, security researcher at Paradigm Academy, and engineer at Concur Technologies.

Jeffrey’s current research explores how state conflict is influenced by advances in technology. Currently, only states wield technologies powerful enough to threaten global civilization. While nuclear weapons were a clear first in their destructive power and speed of engagement, advances in cyber weapons, synthetic biology, and AI will likely bring about new kinds of global threats. Jeffrey’s work aims to help answer the question: How can a multipolar world cope with emerging technologies that threaten both to change the state power landscape and empower non-state actors with previously inaccessible destructive power?

This event is brought to you by Foresight Institute.

Your ticket fee goes towards supporting Foresight Institute’s mission to advance transformative technology towards futures beneficial to life and the biosphere. If that’s not something you are currently able to contribute to, do still join. No one will be turned away for lack of funds at the door. You can shoot us a message at foresight (at) foresight (dot) org for sliding scale access.

Learn about future Foresight events via our Newsletter.