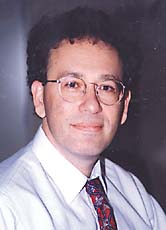 Ron Dagani, Senior Correspondent for Chemical & Engineering News, was named the winner of the year 2000 Foresight Prize in Communications. Dr. Dagani was selected for extensive coverage of nanotechnology and nanotechnology-related research over the past three years in C&E News, the widely-read weekly newsmagazine of the American Chemical Society.

He holds a Ph.D. in organic chemistry from MIT and was an NIH Postdoctoral Fellow in toxicology, also at MIT. Previous honors include being named an AAAS Mass Media Science & Engineering Fellow.

“[The] staff of C&EN felt tremendous pride when earlier this month Senior Correspondent Ron Dagani received the first Foresight Prize in Communication. The award is given by the Foresight Institute, a nonprofit educational organization devoted to nanotechnology and other emerging technologies.

“Dagani was selected for the award because of his extensive coverage of nanotechnology and nanotechnology-related research over the past three years in C&EN. This coverage, the Foresight Institute explained, displayed ‘clear, unbiased, and imaginative writing and production content that lifts the story out of the routine category and gives the reader greater insight regarding the topic covered.’

“Whether nanotechnology or biotechnology, print or online, our job at C&EN is to do just that. My congratulations to Ron, and my personal thanks to the entire C&EN staff for all they do to make today’s and tomorrow’s C&EN worthy of its readers.”

The Prize includes a $1000 honorarium and certificate, to be presented at the Foresight Conference on Molecular Nanotechnology.

Special thanks go to the law firm of Millstein & Taylor, which underwrites the Prize, and to Foresight Senior Associate Larry Millstein of that firm, who initiated this program.

Submissions will be judged on their quality in portraying subjects, themes, or incidents, or on their editorial content. They may include an individual presentation or a series of presentations that lead to a better public understanding of the contributions necessary to the development of molecular nanotechnology or other key emerging technologies of high social or environmental impact. Submissions are limited to nonfiction: print and broadcast media, including books, Internet, and film.

In general, priority will be given to those entries which display clear, unbiased, and imaginative writing and production content that lifts the story out of the routine category and gives the reader greater insight regarding the topic covered.

Preferred submissions will have:

Entry quality will be judged on the basis of accuracy, objectivity, scope, content, and appeal.

A panel will be appointed annually by the President and Executive Director of Foresight Institute to evaluate submissions and will consist of five or more persons respected in the fields of molecular nanotechnology or other emerging technologies, at least one of whom shall also be experienced in journalism.

This panel shall select the submission that, in their judgment, best fulfills the objective, as well as two alternates. It shall include an explanation of its decision. The recommendation will then be reviewed by the Foresight Institute Board of Directors for final approval.

Nominations may be submitted by any interested individual or by the publisher, author, radio or television station, responsible for the effort.

The nomination must include either:

The article or presentation must have been published, aired, or heard in the three calendar years preceding the submissions, which must be received no later than August 15 of any year.