Winners of the 2002 Feynman Prizes in Nanotechnology

Announced during the 10th Foresight Conference on Molecular Nanotechnology: 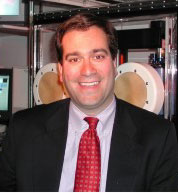 Professor Mirkin was cited for opening up new possibilities for the fabrication of molecular machine systems by selectively functionalizing nanoparticles and surfaces, particularly with DNA, enabling the self-assembly of new structures which move us closer to the goal of molecular manufacturing.

Professor Brenner was cited for fundamental advances in our ability to model molecular machine systems, and for the design and analysis of components likely to be important in future molecular manufacturing systems.

More information in this smalltimes.com article and this UPI article.

Finalists for the 2002 Feynman Prizes

The following five individuals or teams were selected as Finalists for the 2002 Feynman Prize in Nanotechnology, Theoretical:

The following five individuals or teams were selected as Finalists for the 2002 Feynman Prize in Nanotechnology, Experimental:

Two prizes in the amount of $5,000 each will be awarded to the researchers whose recent work has most advanced the development of molecular nanotechnology. This year again separate prizes will be awarded for theoretical work and for experimental work. The prizes will be given at the 10th Foresight Conference on Molecular Nanotechnology, to be held October 11-13, 2002, in Bethesda, Maryland.

This prize is in honor of Richard P. Feynman who, in 1959, gave a visionary talk at Caltech in which he said “The problems of chemistry and biology can be greatly helped if our ability to see what we are doing, and to do things on an atomic level, is ultimately developed—a development which I think cannot be avoided.”

Selection Committee for the 2002 Prize

A committee of previous Feynman Prize winners has been asked to select this year’s honorees. Invitees are:

The Foresight Institute Feynman Prize 2002 will be the most recent in a series of annually awarded prizes for accomplishment in molecular nanotechnology. Both the annual Feynman Prize in Nanotechnology and the Feynman Grand Prize are sponsored by the Foresight Institute to encourage and accelerate the development of molecular nanotechnology. Both are named in honor of Nobel laureate physicist Richard Feynman. However, these prizes differ in focus, frequency of award, and scale.

The 2002 and other annual Prizes (originally designated the Feynman Prize in Nanotechnology) recognize recent achievements that contribute to the development of nanotechnology. The nature of the achievement is not specified in advance, and the judges choose from among the entries submitted which one most advanced the field during the preceding several years. In contrast, the Grand Prize will be awarded at some undetermined date in the future when someone builds two specified working devices, an accomplishment that will signal a crucial milestone on the road to a mature molecular manufacturing technology.

The first annual Prize was $5000, the second was $10,000, and since the third the annual Prize has consisted of two prizes of $5,000 each, awarded for separate accomplishments in theoretical and in experimental areas. The Grand Prize will be at least $250,000.

Nominations must state which Prize is being applied for (Experimental or Theoretical) and include at least one of the following:

Foresight requests that materials be sent by email, with URLs, whenever possible.

Submissions should be mailed to the Foresight Institute at the postal address below, or emailed to [email protected], to arrive by June 30, 2002. The summary must include the applicant’s address, telephone, and (if possible) fax number and email address. In the case of nominations, contact information should be included for both nominator and nominee. Finalists may be contacted for additional information.

Individual submissions are preferred, but teams of up to three will be considered. Team members may not be changed after the submission deadline.

The prizewinner (minimum of one person per team) must accept in person at the Feynman Awards Banquet at the conference. The prizewinner (or one member of each winning team) will receive complimentary full registration including tutorial and banquet, coach airfare and up to 4 nights hotel (arranged by Foresight Institute, Sat. night stay required), $250 cash to cover additional expenses, and the physical award.