Winners of the 2005 Feynman Prizes in Nanotechnology

The Foresight Institute Feynman Prizes are given in two categories, one for experimental work and the other for theory in advances in nanotechnology.

A key element in Dr. Joachim’s work has been his introduction of elastic scattering quantum chemistry (ESQC) theory to explain tunneling junctions between metal electrodes and molecules, now a standard for STM image calculations. Dr. Joachim previously shared the 1997 Feynman Prize in Nanotechnology for Experimental Work for his contribution to pioneering work using scanning probe microscopes to manipulate molecules. The 2005 Prize recognizes his uniquely broad and deep visionary contributions to understanding molecular properties and predicting the behavior of designed single molecule devices.
http://www.cemes.fr/r2_rech/r2_sr2_gns/index.htm

The Foresight Institute Feynman Prize for Experimental work was awarded to Dr. Christian Schafmeister, University of Pittsburgh, for his work in developing a novel technology synthesizing macromolecules of intermediate sizes (between 1000 and 10,000 Daltons) with designed shapes and functions. The technology is derived from solid phase peptide synthesis, but with the crucial difference that adjacent monomers are connected through pairs of bonds, rather than through single peptide bonds, thus forming rigid, spiro-ladder oligomers instead of floppy peptide chains capable of assuming numerous shapes.

As part of this work Dr. Schafmeister developed computer-aided design software to permit designing oligomers with desired shapes. These oligomers can be assembled using automated equipment, chemically modified to add desired chemical functions and to achieve desired solubility, and obtained in high purity. Because the oligomers are large enough to have interesting functions and rigid, designed shapes, they hold great promise as nanoscale parts for future atomically precise nanoscale machines.
http://www.chem.pitt.edu/people/faculty.asp?FacID=26 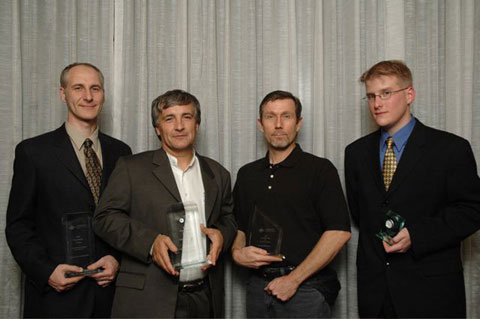 Two prizes in the amount of $10,000 each will be awarded to the researchers whose recent work has most advanced the achievement of Feynman’s goal for nanotechnology: molecular manufacturing, defined as the construction of atomically-precise products through the use of molecular machine systems. This year again separate prizes will be awarded for theoretical work and for experimental work. The prizes will be announced at a gala banquet at the 13th Conference on Advanced Nanotechnology, to be held October 22-27, 2005, at the San Francisco Airport Marriott Hotel.

This prize is given in honor of Richard P. Feynman who, in 1959, gave a visionary talk at Caltech in which he said “The problems of chemistry and biology can be greatly helped if our ability to see what we are doing, and to do things on an atomic level, is ultimately developed — a development which I think cannot be avoided.”

Selection Committee for the 2005 Prize

A committee chaired by a previous Feynman Prize recipient will be asked to select this year’s honorees.

The 2005 Foresight Institute Feynman Prize will be the most recent in a series of annually awarded prizes for accomplishment in molecular nanotechnology. Both the annual Feynman Prize in Nanotechnology and the Feynman Grand Prize are sponsored by the Foresight Institute to encourage and accelerate the development of molecular nanotechnology. Both are named in honor of Nobel laureate physicist Richard Feynman. However, these prizes differ in focus, frequency of award, and scale.