Take a look at our progress & plans, and fund great futures with fiat or crypto.

R. Dean Astumian [1] [2] has proposed a method for catalyzing chemical reactions using mechanical force. Reactions that are not at all favored can be forced to happen by employing a molecular device and adding “fuel.” The reaction is cycled by repeatedly adding an oxidizing agent and then a reducing agent. The reactions occur at near room temperature in a single pot, without steps of filtration or washing.

Synthesizers of this type will have a wide range of applications in chemical engineering. The same complex of molecules has the potential to catalyze a wide range of different reactions. When this mechanical synthesizer has been proven in the lab, manmade molecular machinery will start on a path which yields profitable commercial results all along the way. This synthesizer has the potential to separate process improvements from the design of the molecules being produced. As was shown in the silicon chip industry, the separation of process improvements from the specifics of what is being produced can greatly speed up the development of a new industry.

The mechanism is a molecule, shown above as a rod with two rings on it. The three black spots are “stoppers” that the rings on the rod cannot traverse. The rod has active stretches on it. The red sections (DNP) attract the ring when the ring is oxidized. The blue/purple sections attract the ring when the solution is in a reduced state. The rings move side to side along the rod according to the pH of the solution.

The diagram above shows four states of the rod. In the lower right, substrate molecules A and B attach to the rings. The solution is reduced to move to the upper right state. The rings are close together and hold A and B against each other. They bond due to each seeing a large concentration of the other. An A-B complex is formed, even though it would not form freely in the solution. Some change to the solution causes A-B to detatch from the rings. The rod is now in the upper left state, and adding oxidizer moves it to the lower left. Another change causes A and B to attach to the rings, and the cycle starts over. Note that the system can be held in the upper right state as long as needed to cause A-B to form. By repeatedly cycling the pH, A and B are consumed and A-B builds up in the solution.

The rings are tetracationic cyclobis(paraquat-p-phenylene) cyclophane (CBPQT4+). Previous experiments have demonstrated that a sliding-ring catenane (CBPQT4+) on a molecular rod will move in response to pH change. [4] [5] The part of the rod that attracts the rings in an oxidized environment is 1,5-dioxynaphthalene (DNP). The part that attracts the rings in the reduced environment is shown above in the diagram. Extremely detailed work on CBPQT4+ rings and their interaction with DNP appears in [3].

It is likely that distinct kinds of rings on the left and right will be used. A and B may attachto them spontaneously out of solution. More likely, some kind of chemical changes will be needed in the solution to encourage A and B to attach. After A-B is formed, another change will be needed to make this molecule detatch from the rings. Similar techniques have been used before.

The fuel which powers the reaction is the addition of an oxidizer in one part of the cycle and a reducer in the other. This alternation can be done many times and the byproducts will not interfere with the A-B reaction.

There are many problems that need to be solved before Astumian’s Mechanical Bonder can be realized. At the start of each cycle, A and B will be in solution, and will attach to the rings. The two rings need to be different from each other. Subtrate A should bind preferentially to one, and B to the other. Some difference needs to prevent A from attaching to both rings, or B attaching to both rings. 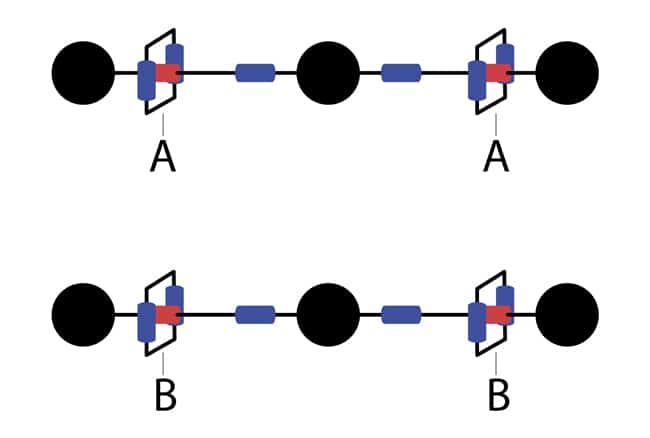 During the bonding step, the rings must not rotate on the rod. If bonding requires energy input and time, the minimum energy configuration will very likely be with A and B on opposite sides of the rod. They will not bond in this configuration. Something needs to prevent this.

Also during the bonding time, A and B must be prevented from rotating. A specific site on A needs to bond with a specific site on B. Bonding might happen even if A and B can rotate freely, but more likely A and B will need to be held in a certain orientation.

It is likely that Astumian and David Leigh’s group at the University of Manchester are working on a detailed design that solves these problems.

The author is not a chemist, and invites others to speculate on which reactions would be facilitated by this new kind of catalyst. One big advantage is that the bonder can exert a large force on two molecules to make them bond at a low temperature. This may help to attach a group to a protein without denaturing it. It may be useful for attaching two proteins to each other.

Astumian’s Mechanical Bonder has the potential to have a large impact. The same basic mechanism will allow the bonding of a variety of different molecules at near-room temperature and in one pot, driven by fuel from the outside. Each improvement will allow a wider range of reactions to be catalyzed. At each stage of development, commercialization is possible. To the extent that design of the mechanism is separate from the specifics of the reactions catalyzed, further improvement of the mechanism will be rapid.

[2] Slide shown here and information in this paper came from a talk at the Foresight Institute, “David Leigh, Raymond Astumian, Alberto Credi: The Advent of Artificial Molecular Machines”, 18 Feb 2021. video (see 30:15 to 58:56): https://www.youtube.com/watch?v=HSXy3h_BTrQ&list=PLH78wfbGI1x3hjH8RKrgoT6pgUG-k0vdI&index=4