In this session, James Kirkland from Mayo Clinic gave a comprehensive overview of the current state of research about senescent cells and senolytic clinical trials. He provided nuanced insights into how senescent cells become senescent, how they work, what kind of functions can they play, and much more. He also went through 15 clinical trials that are currently testing senolytics on different indications and provided explanations and motivations behind the trials and what are the studies already in process finding, or discovered recently. 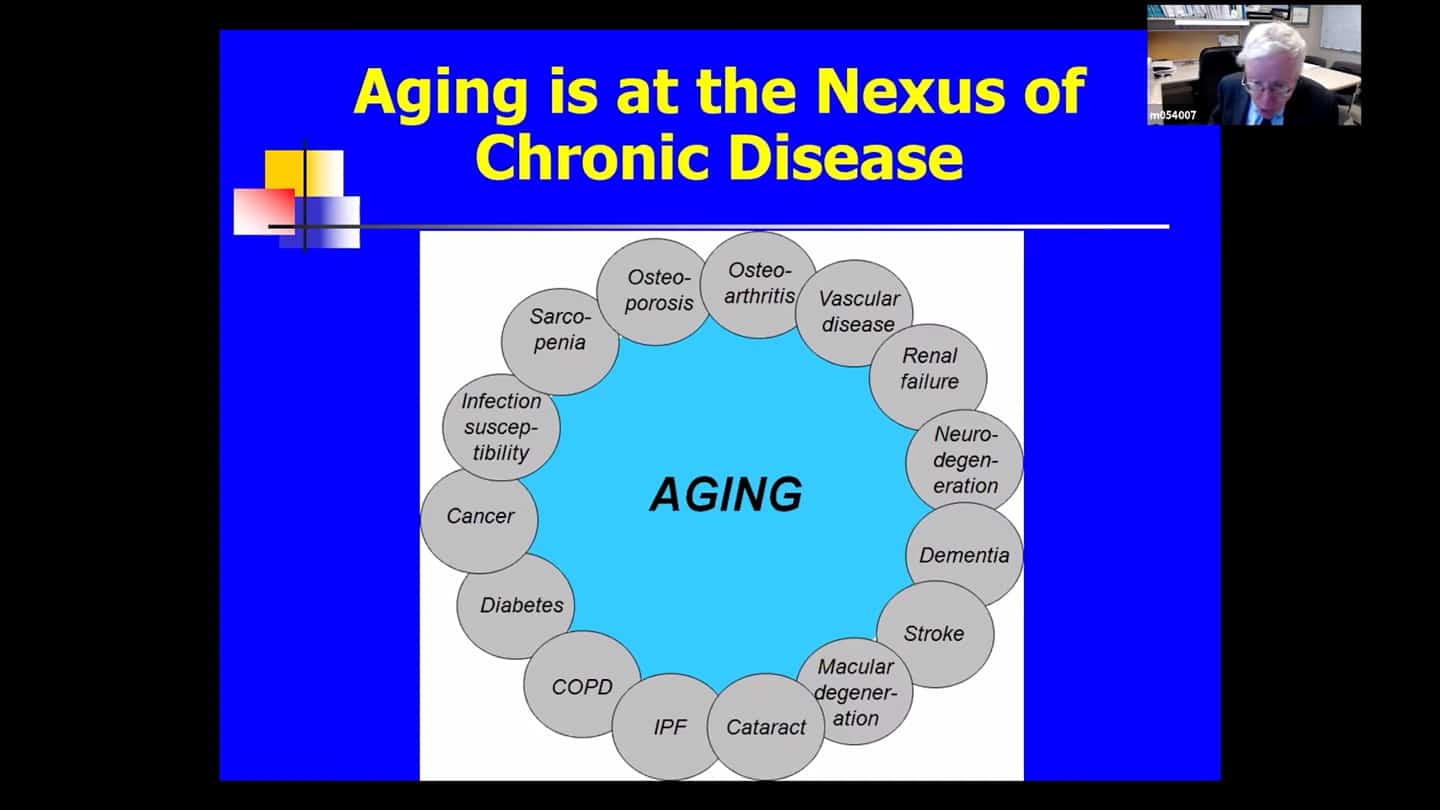 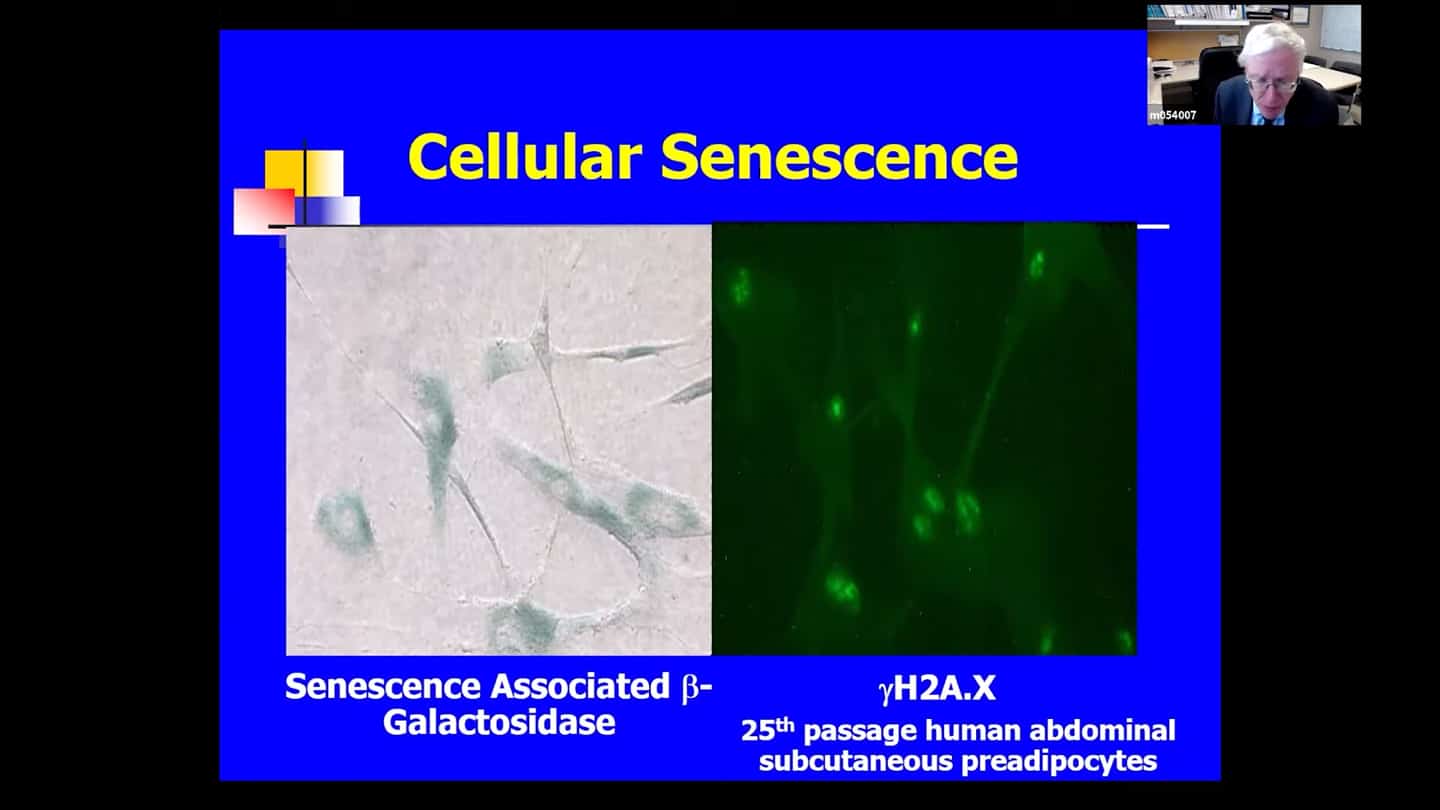 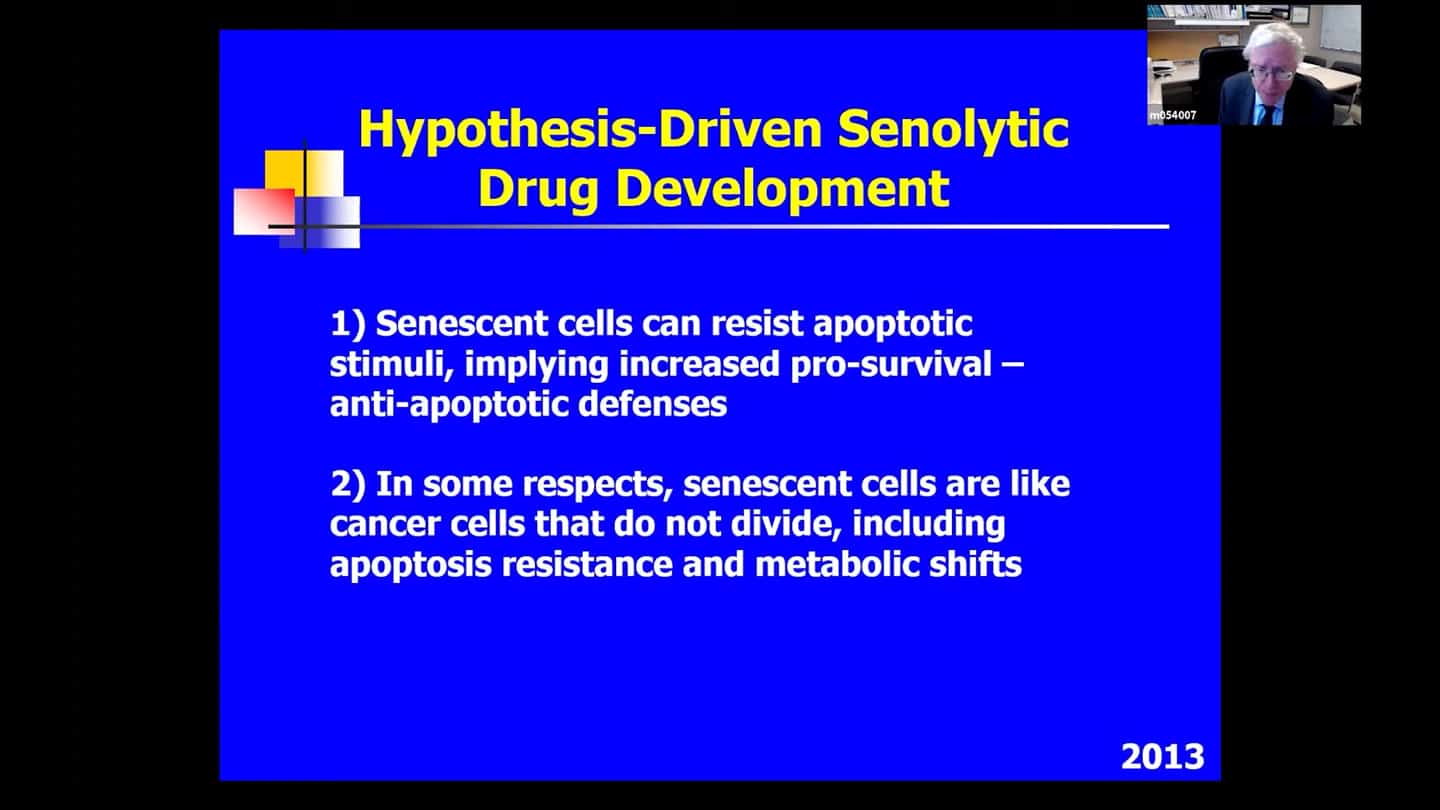 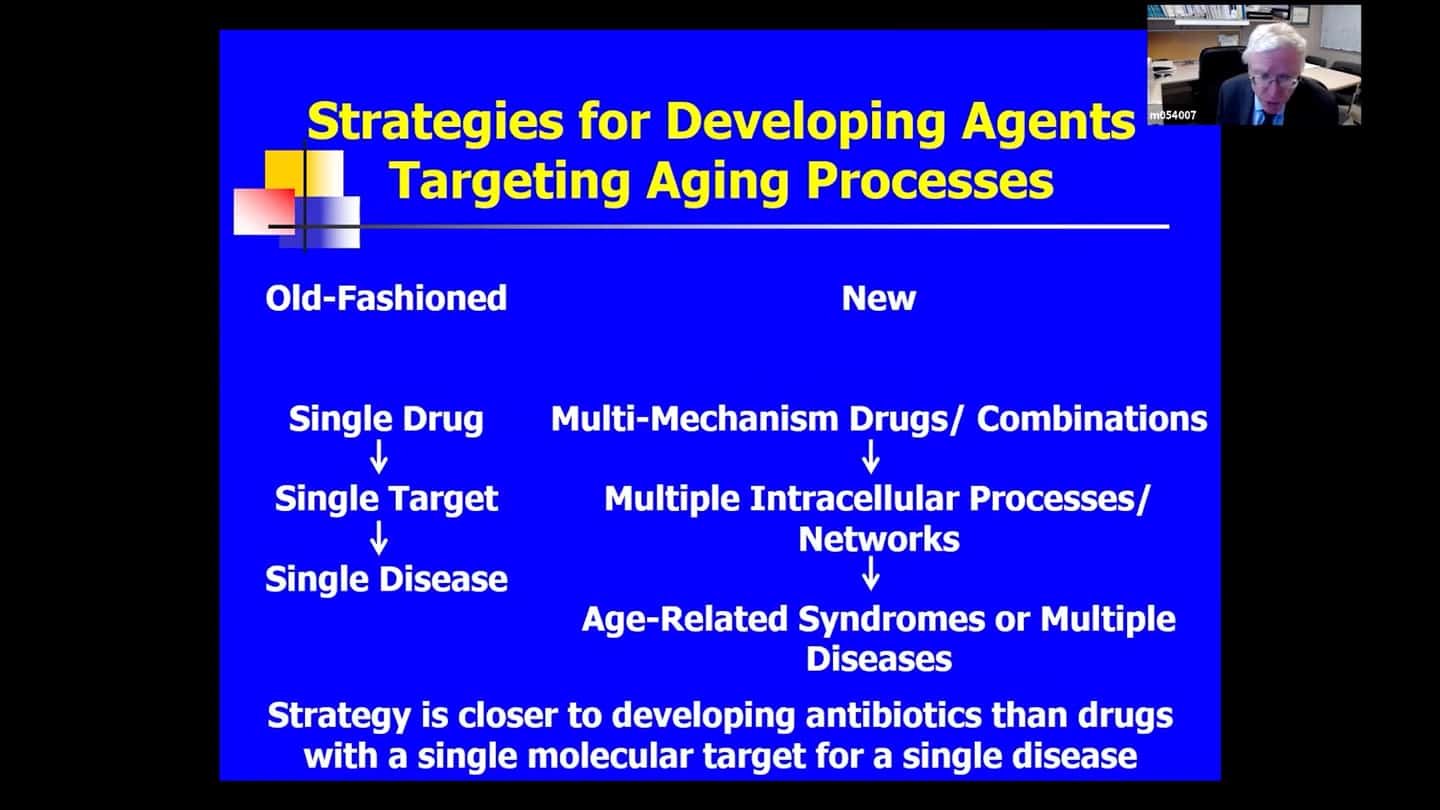 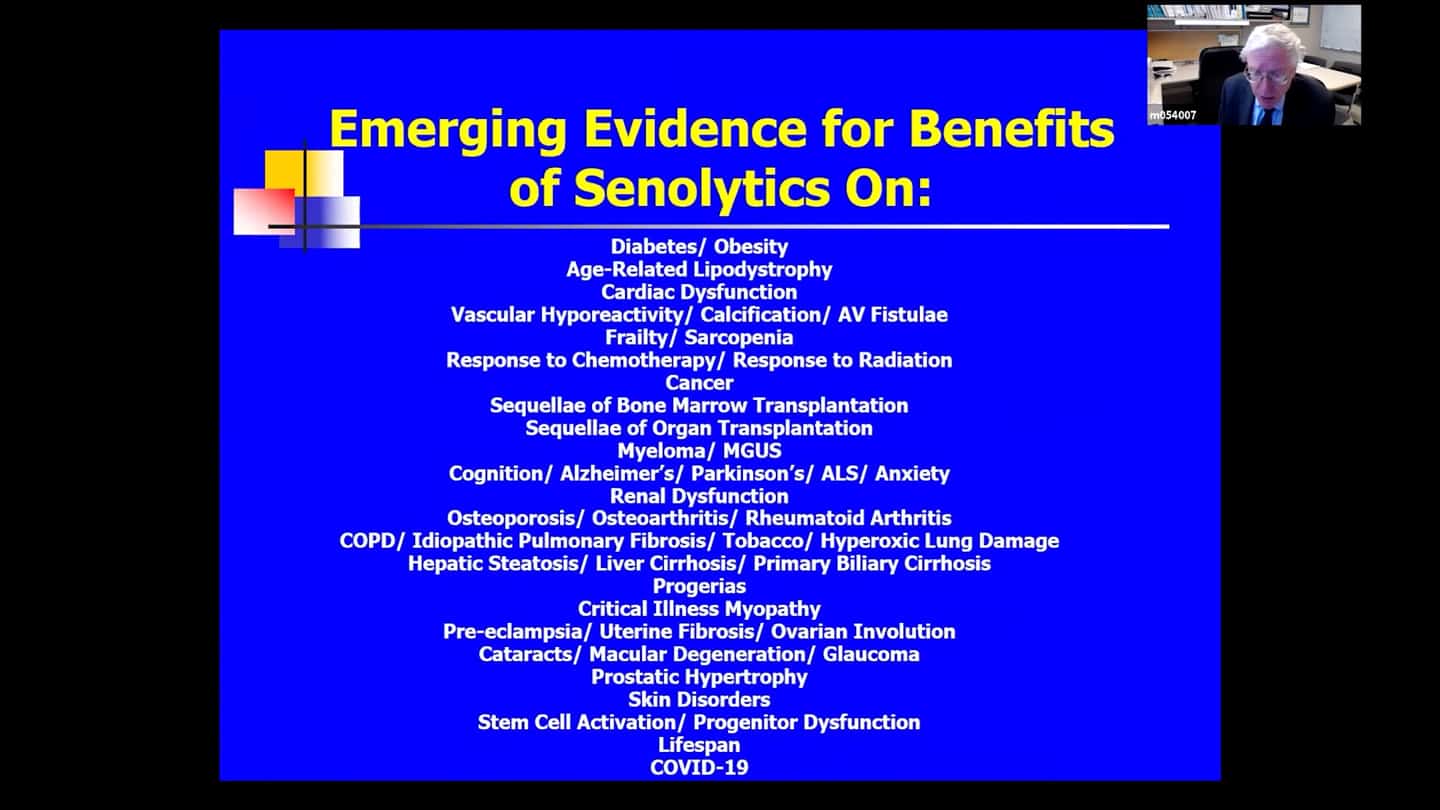 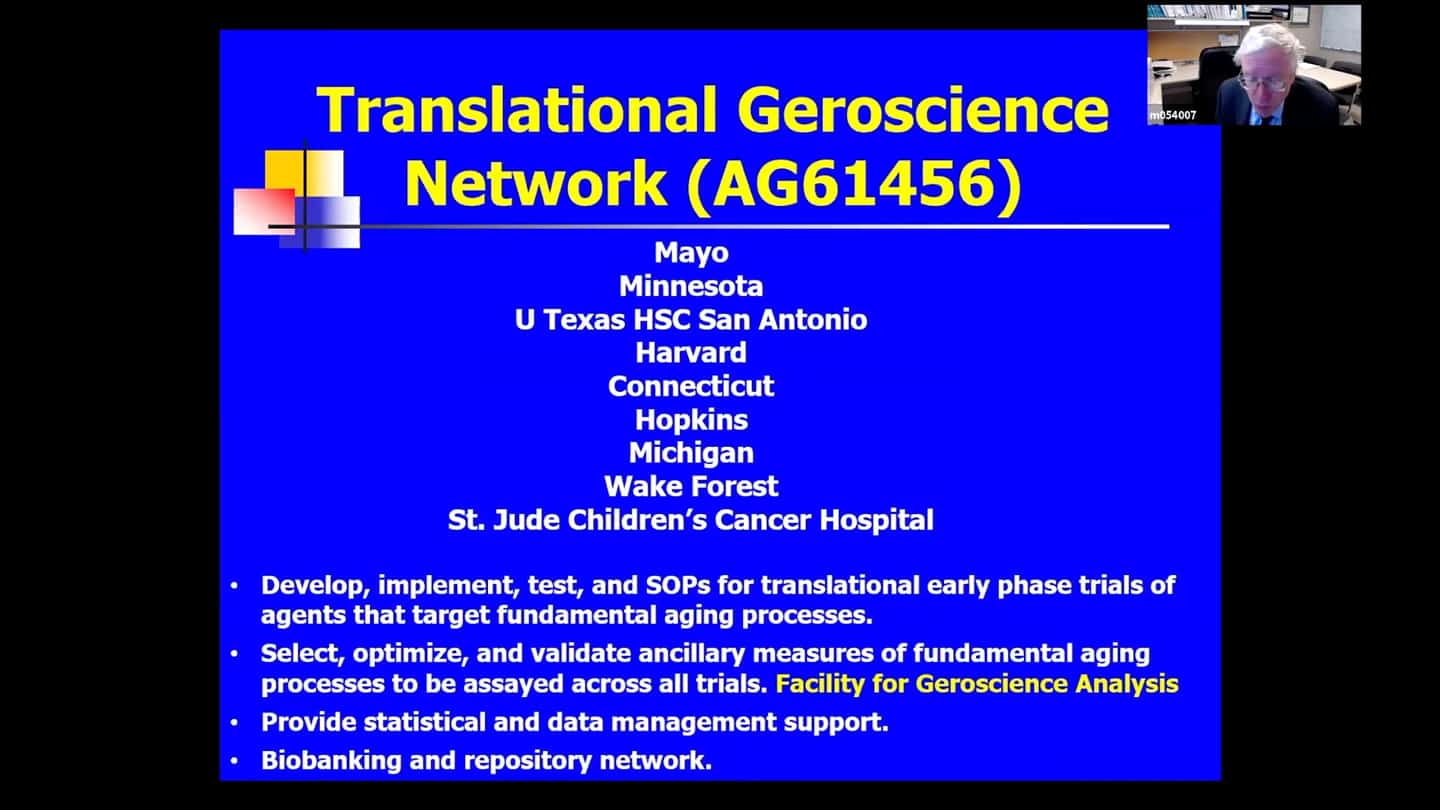 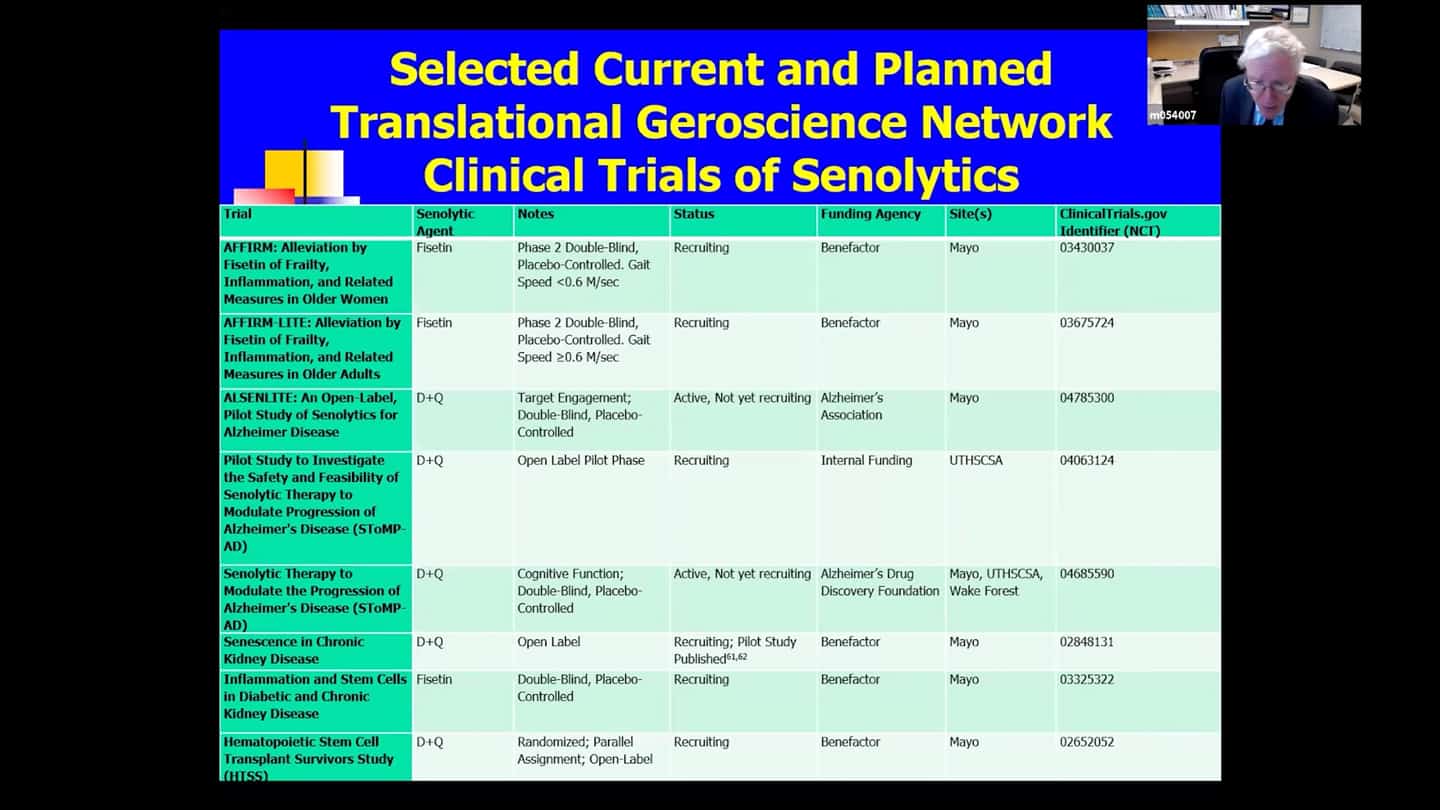 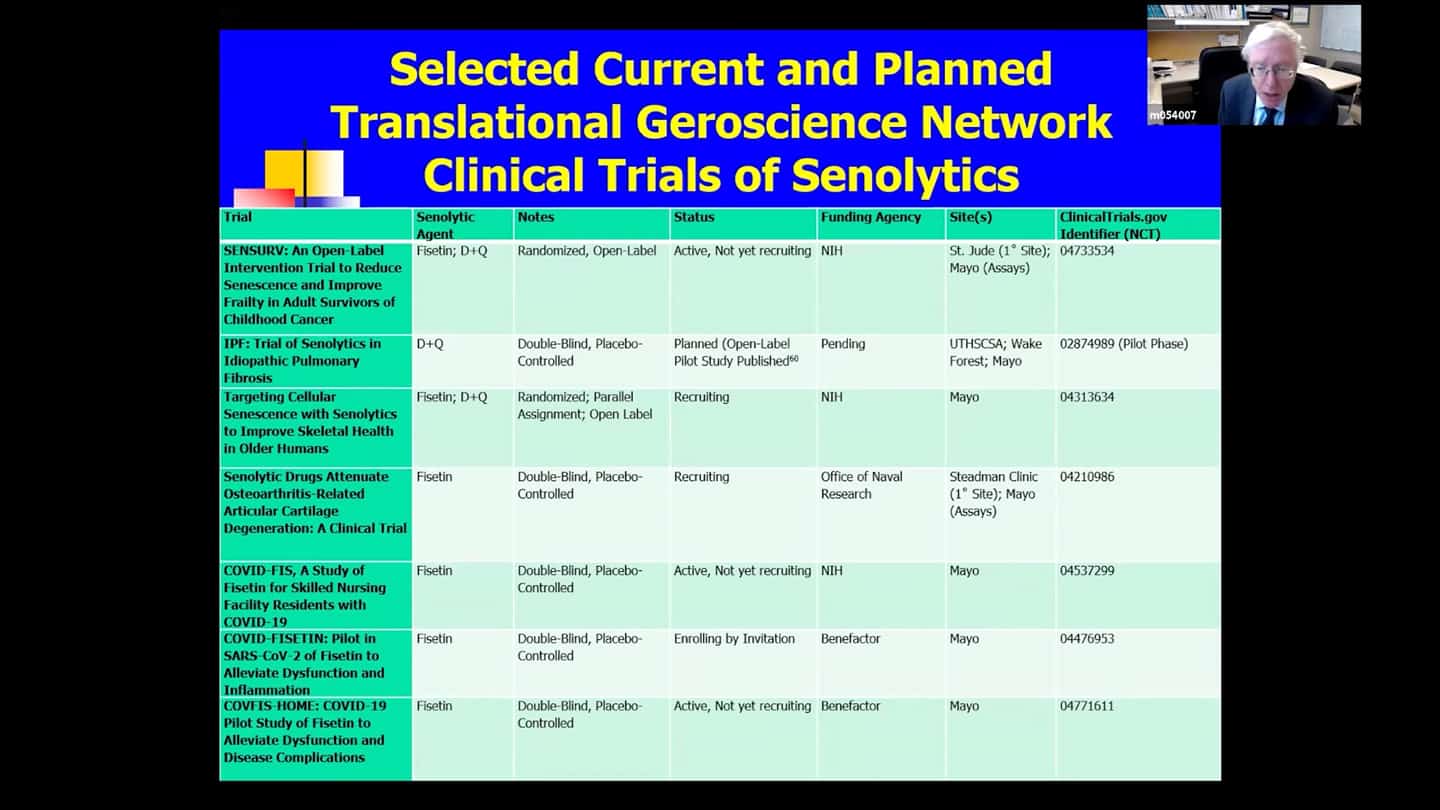 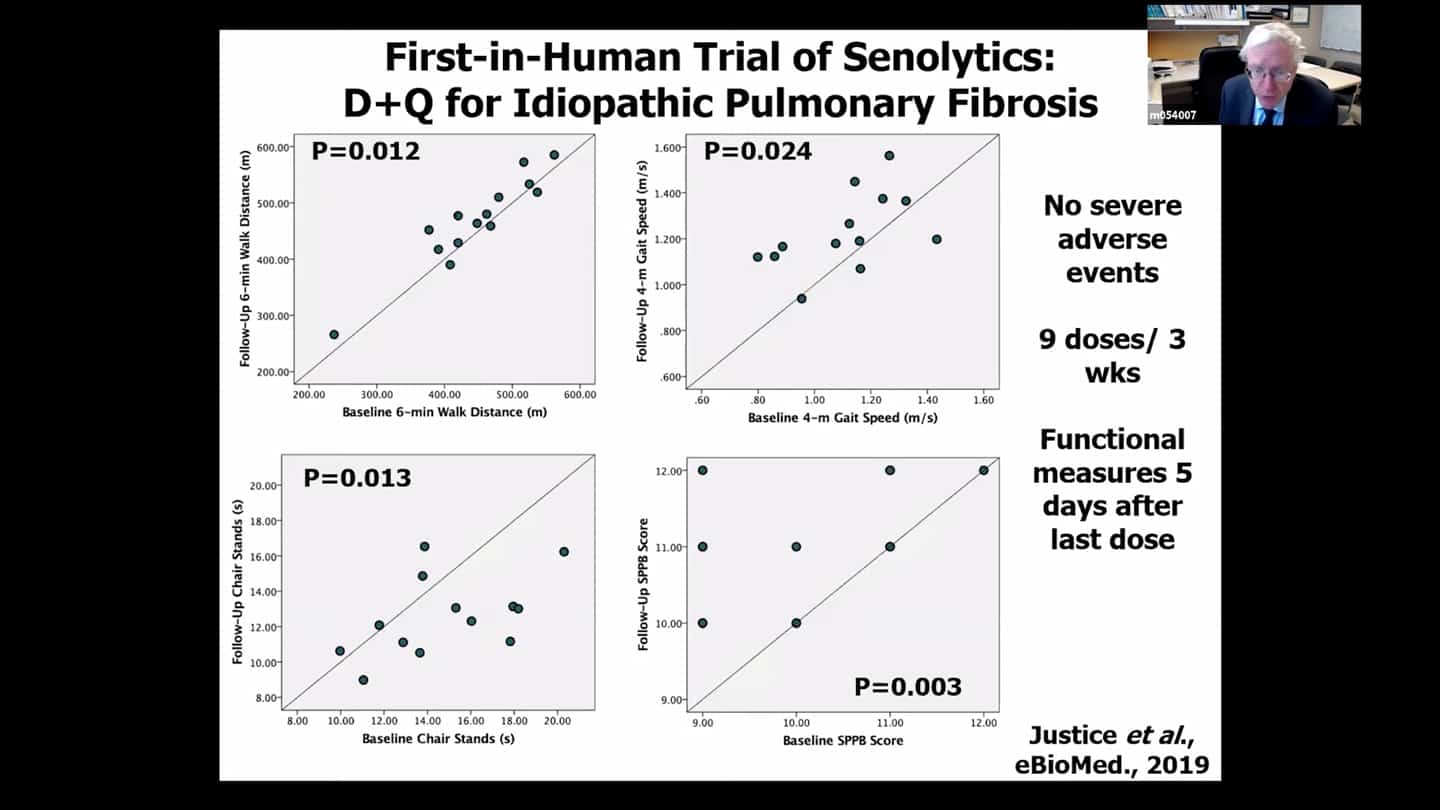 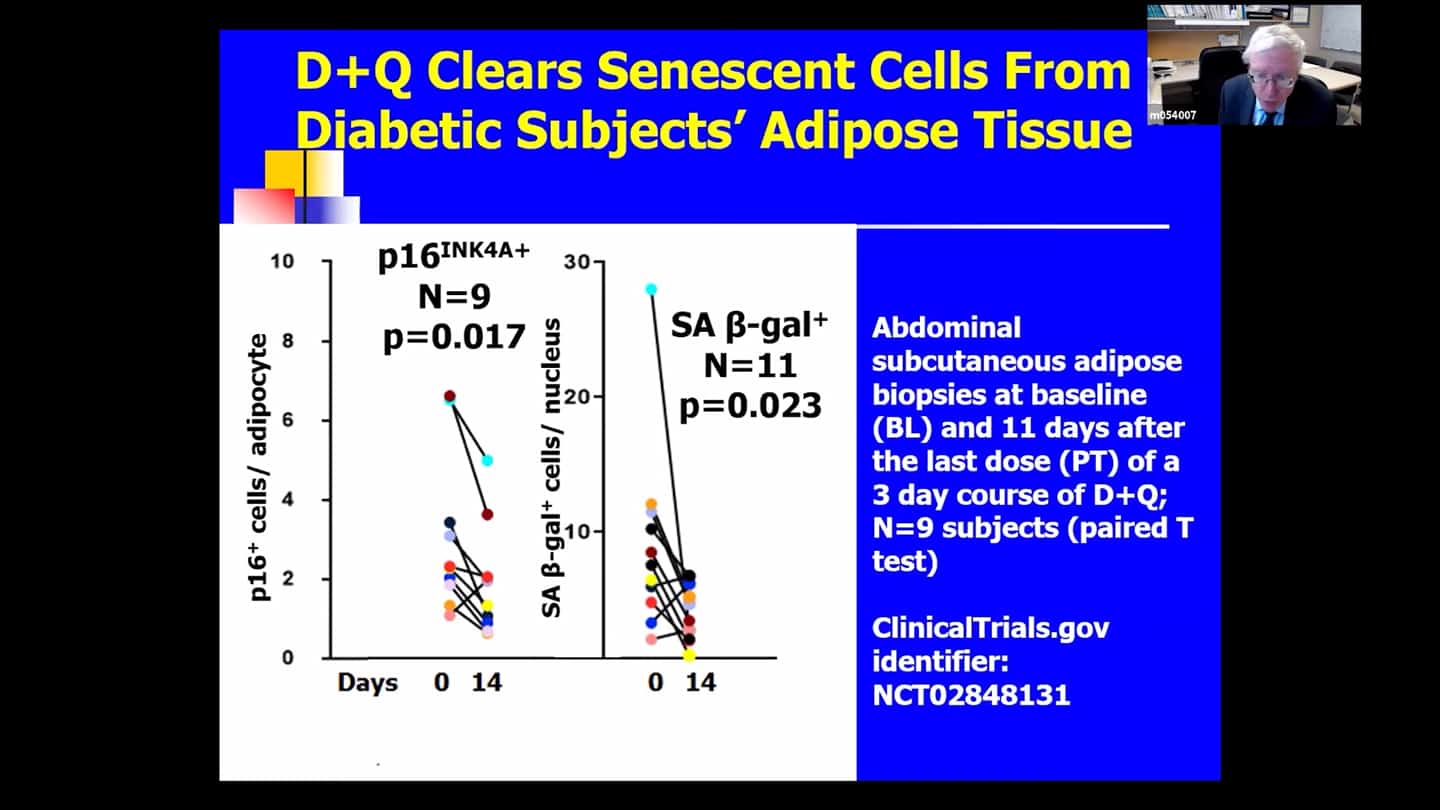 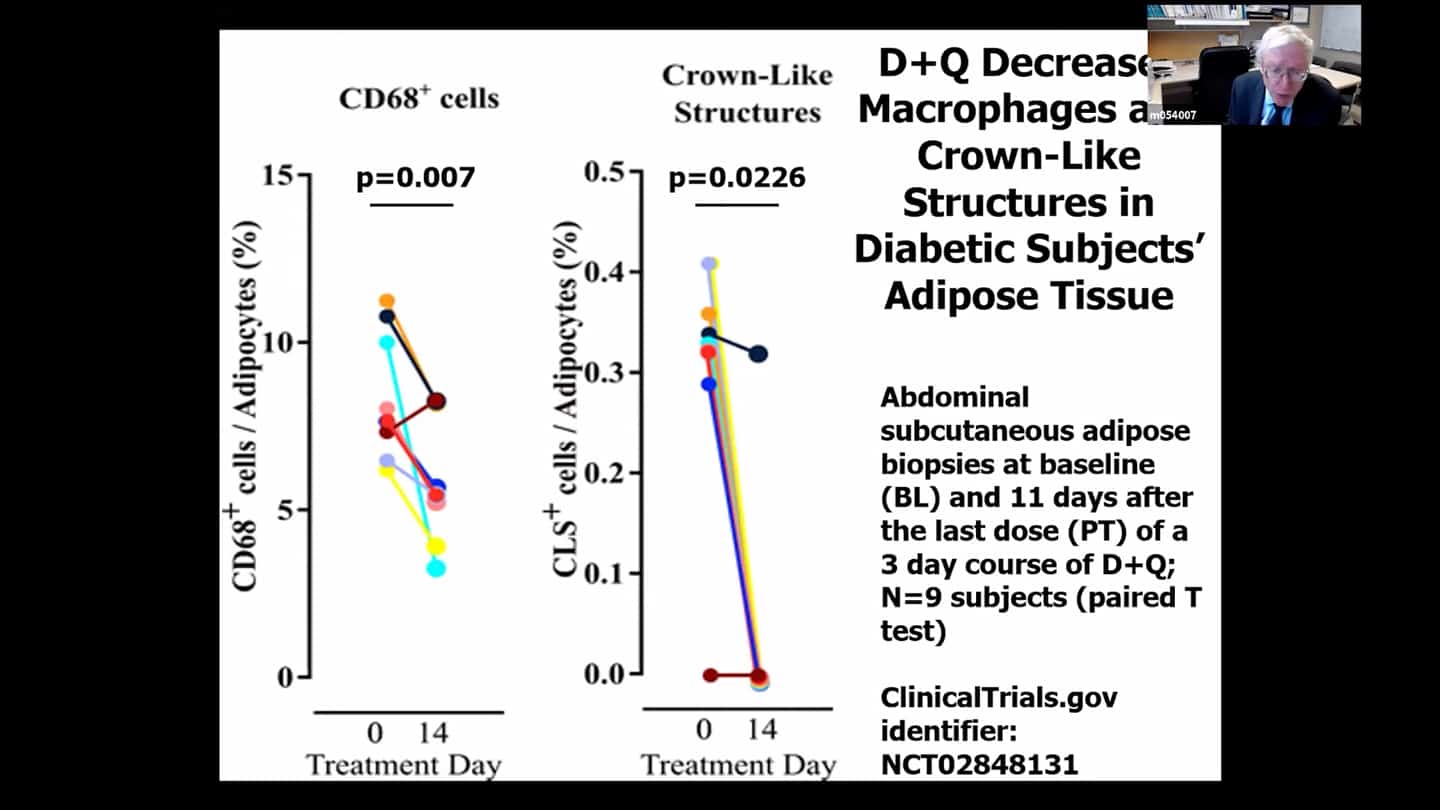 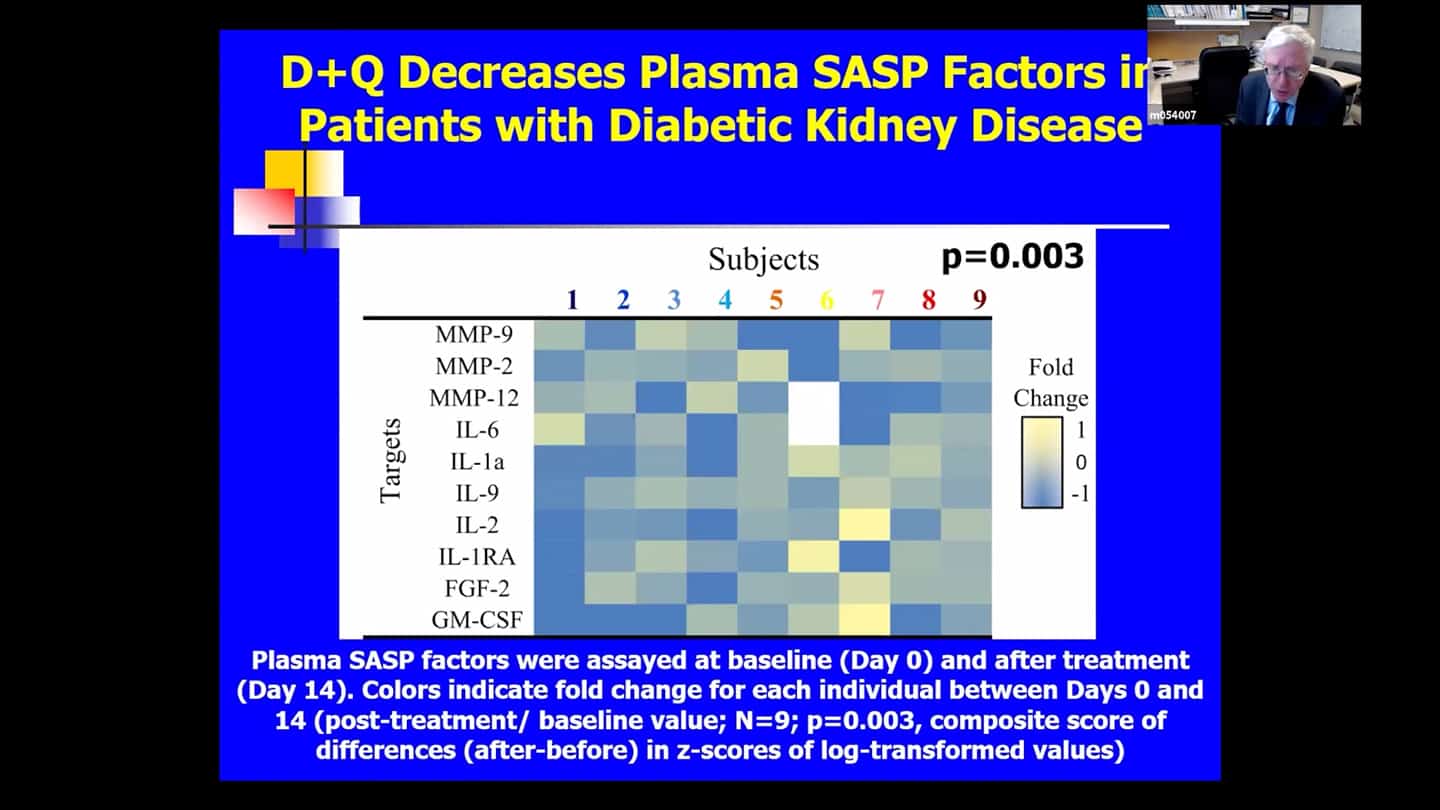 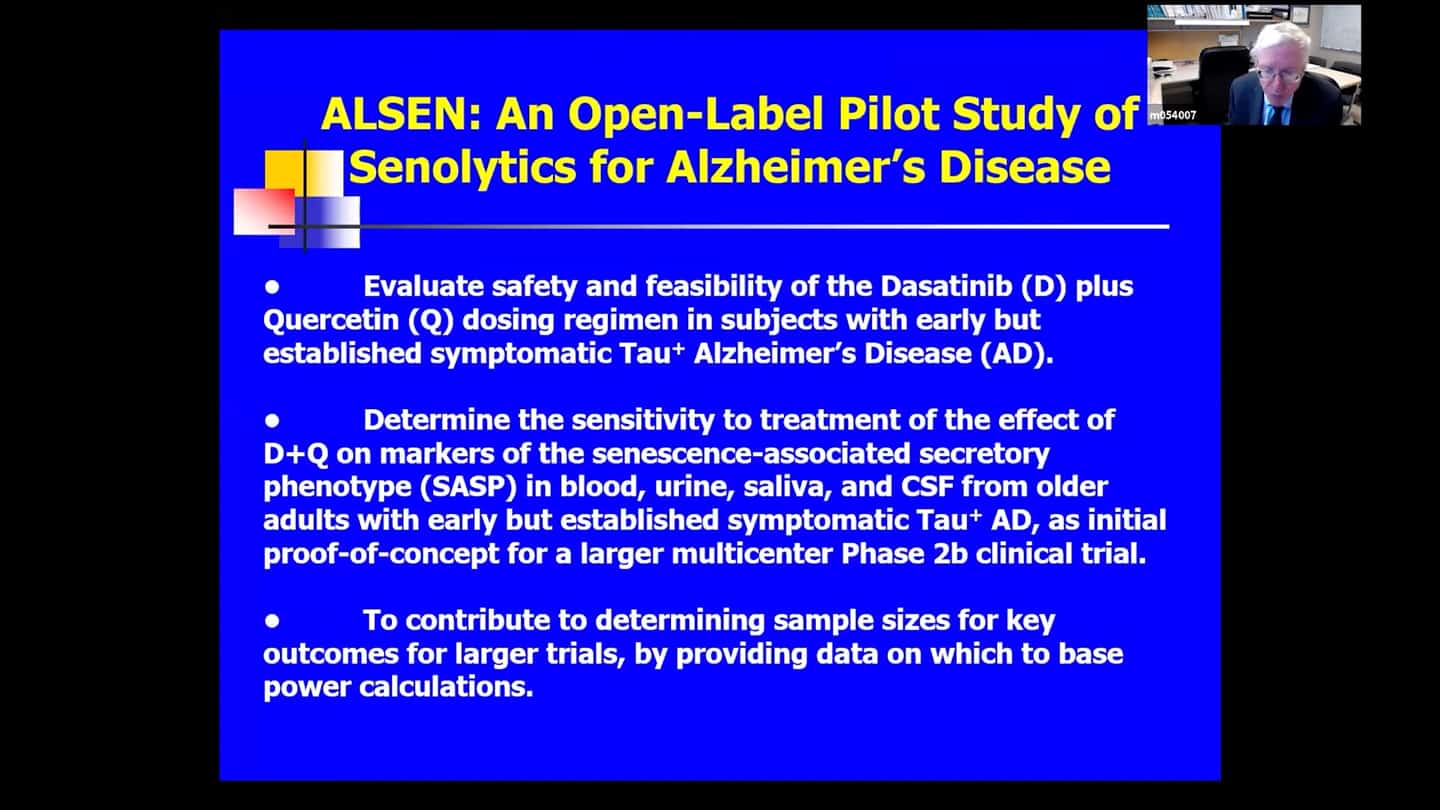 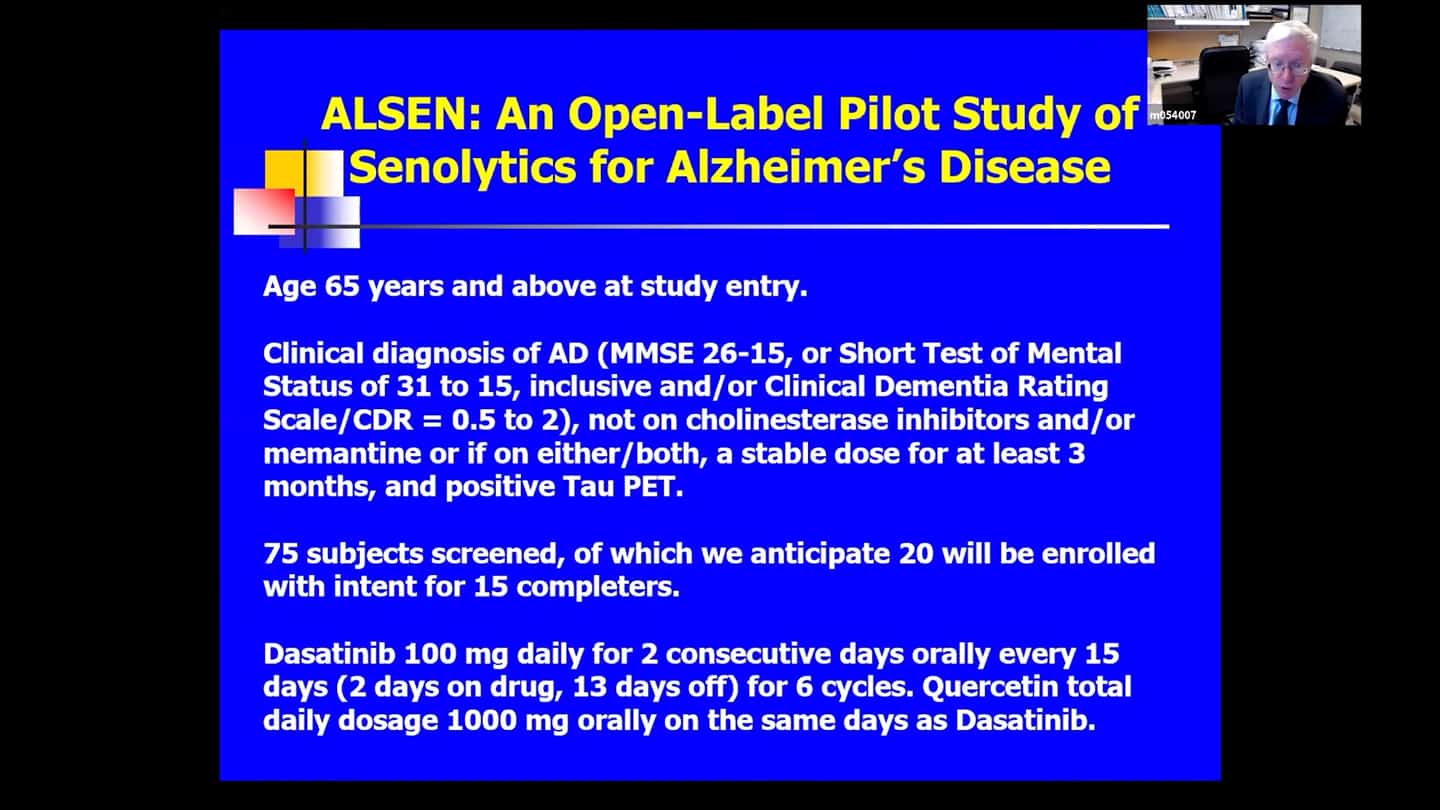 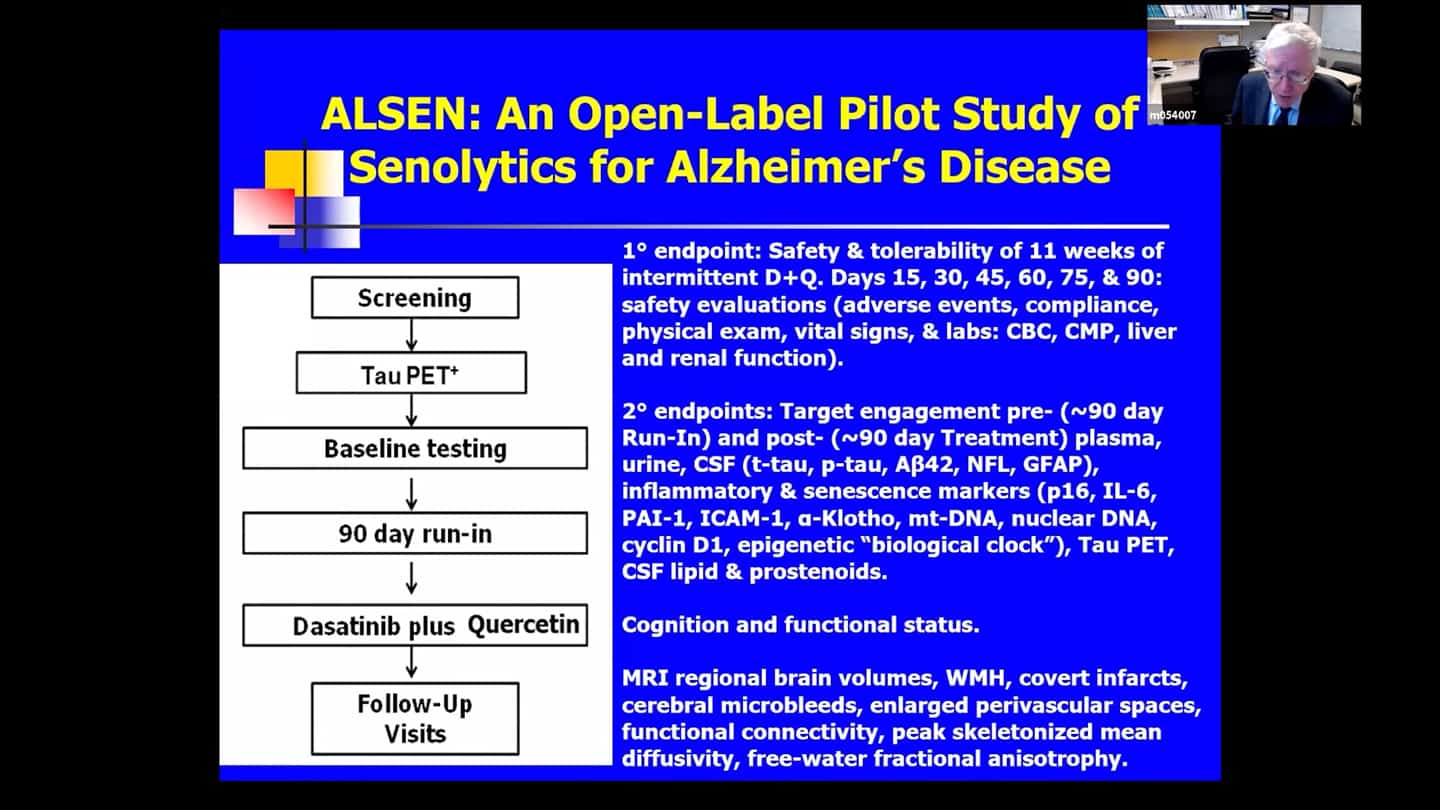 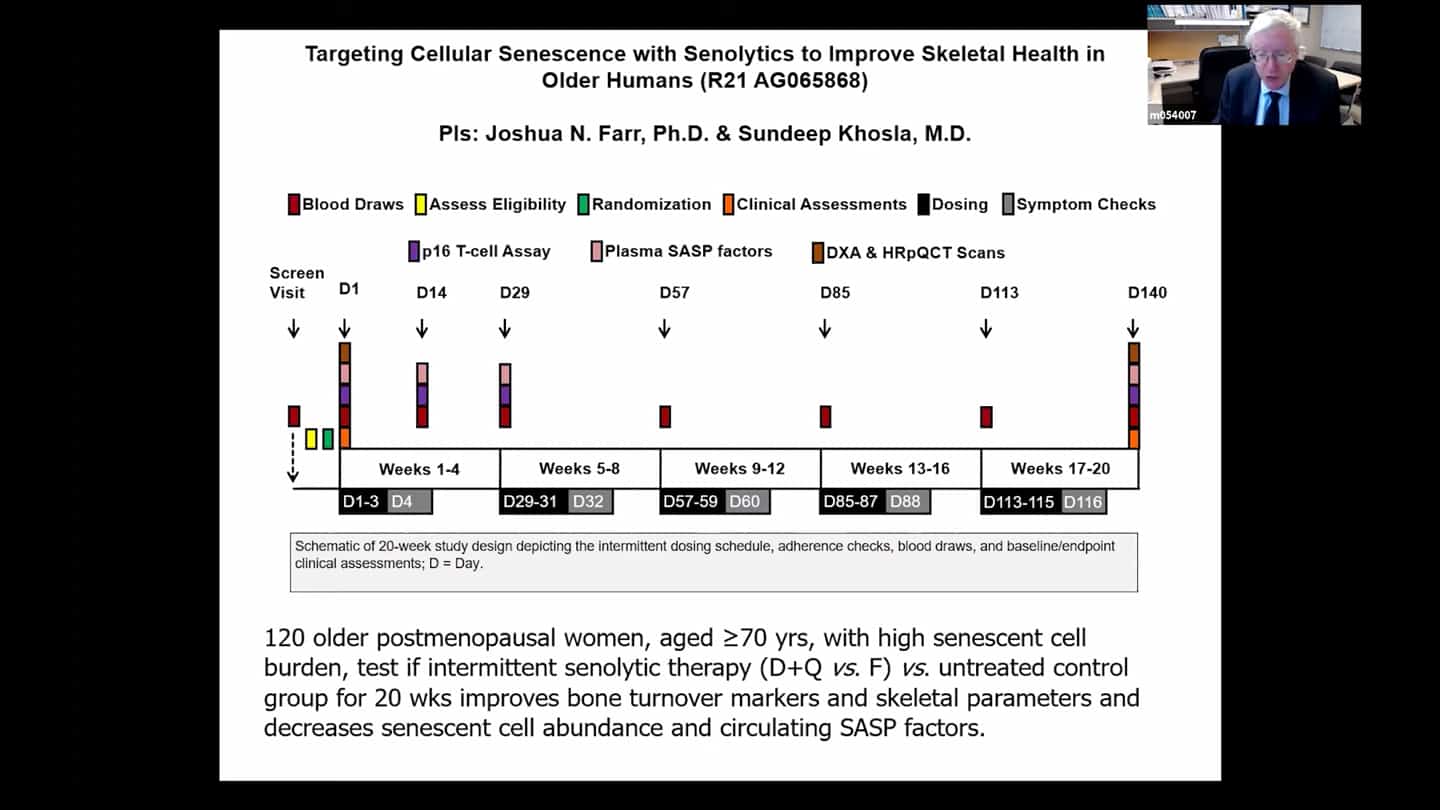 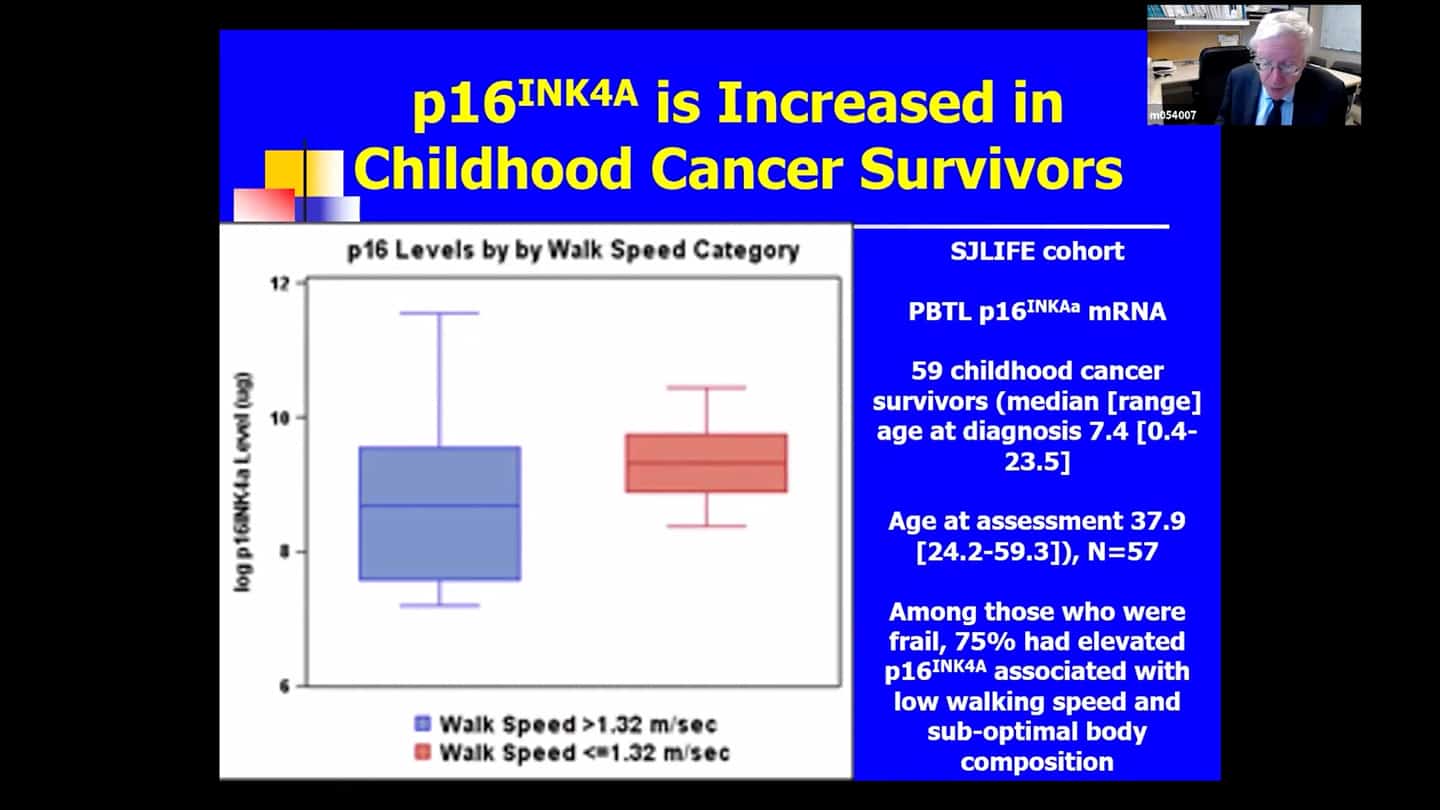 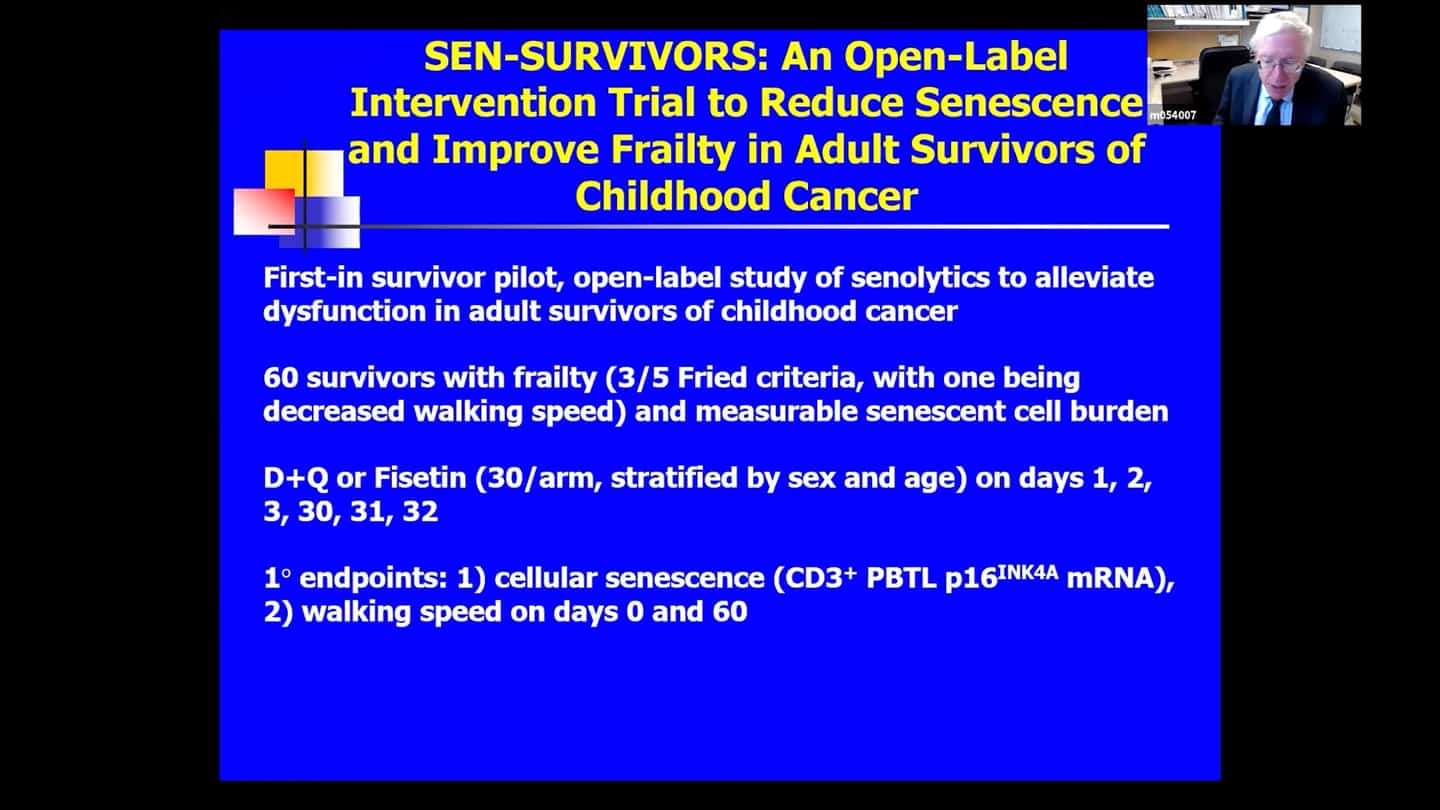 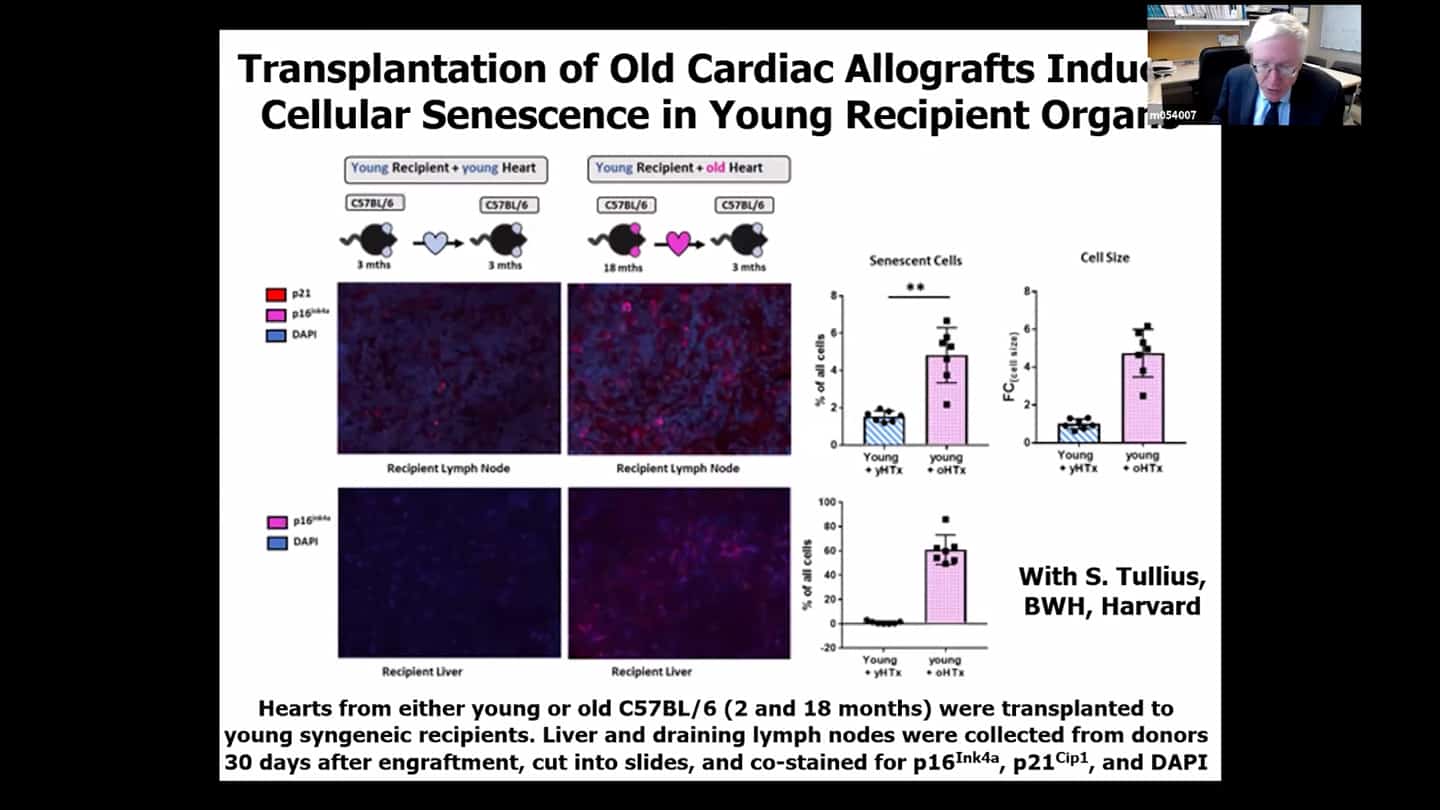 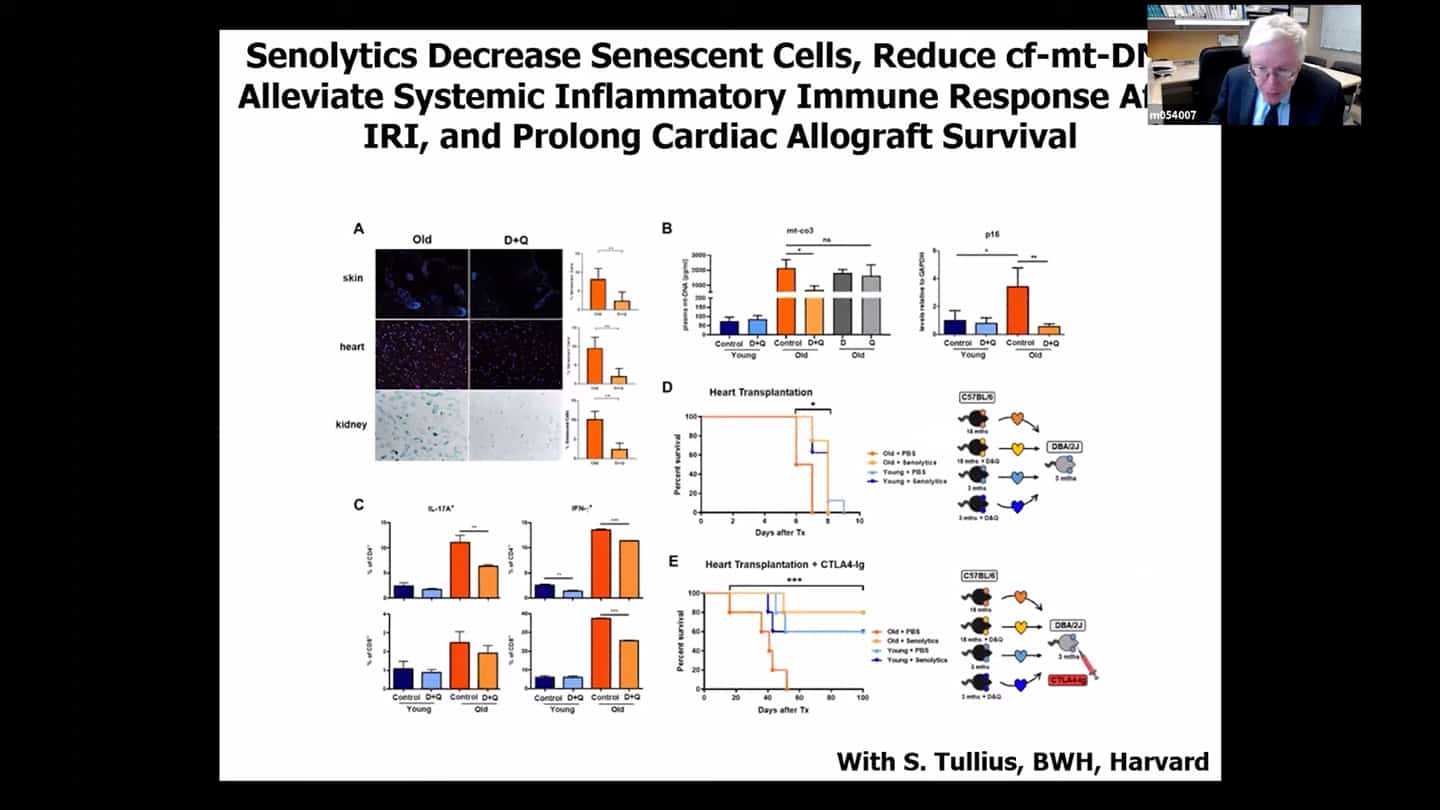 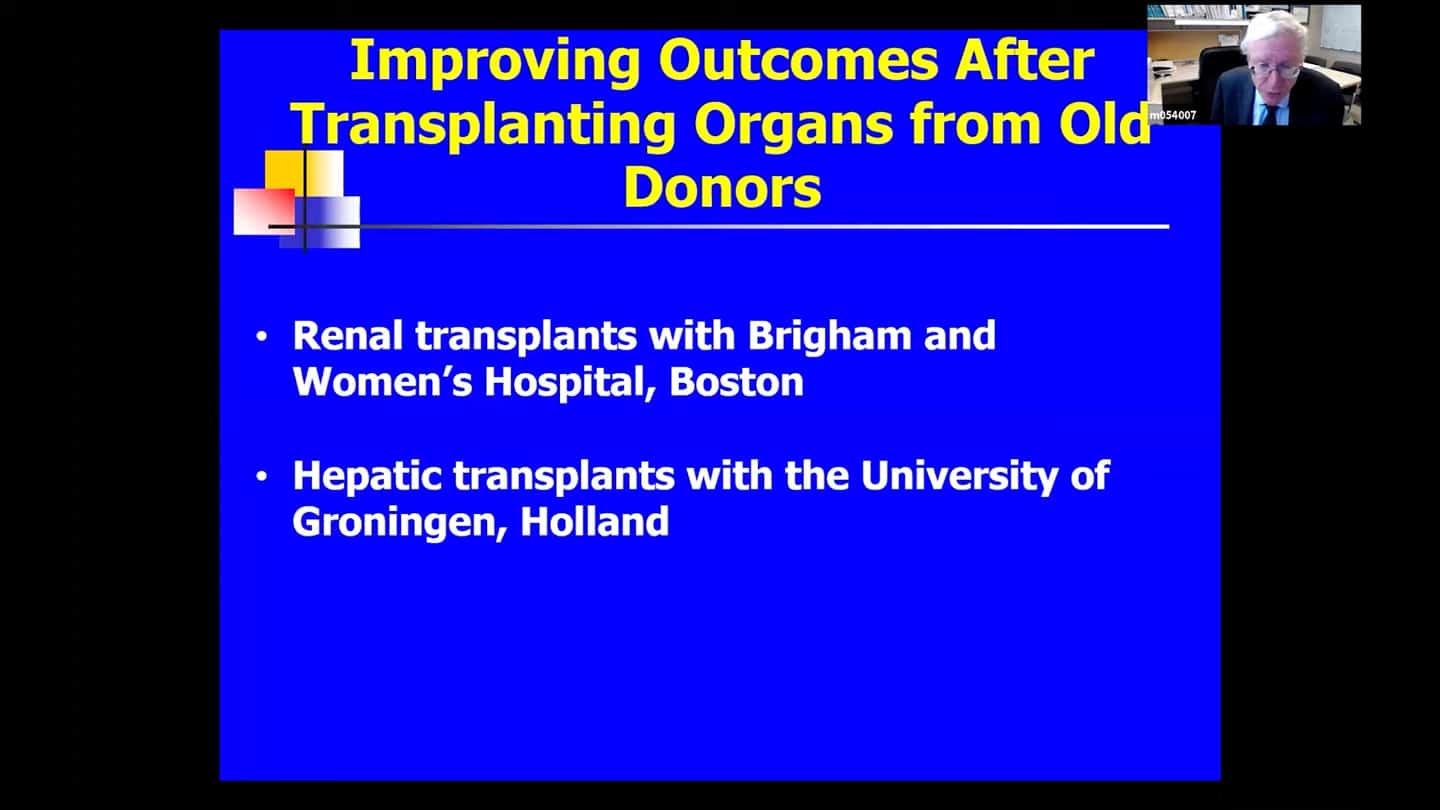 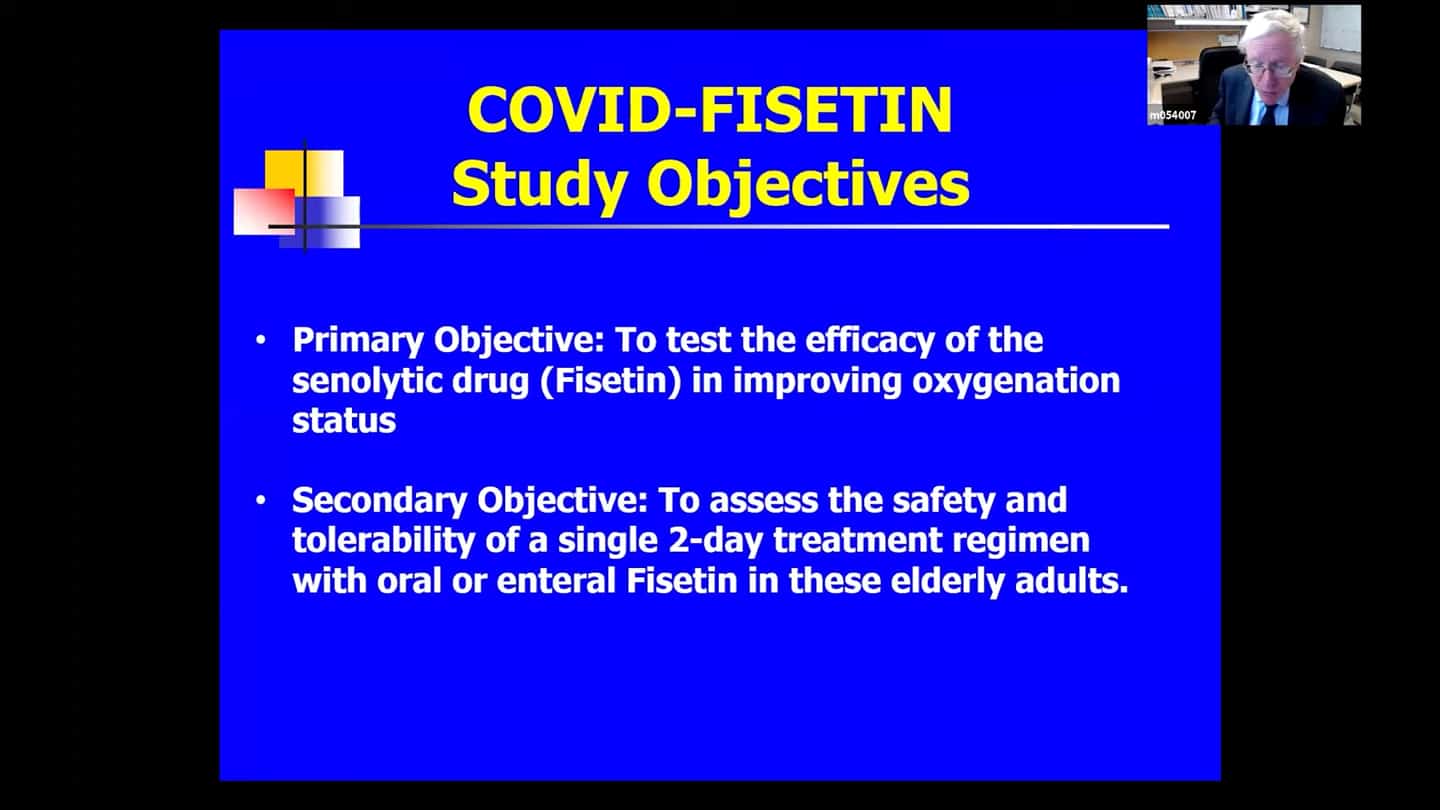 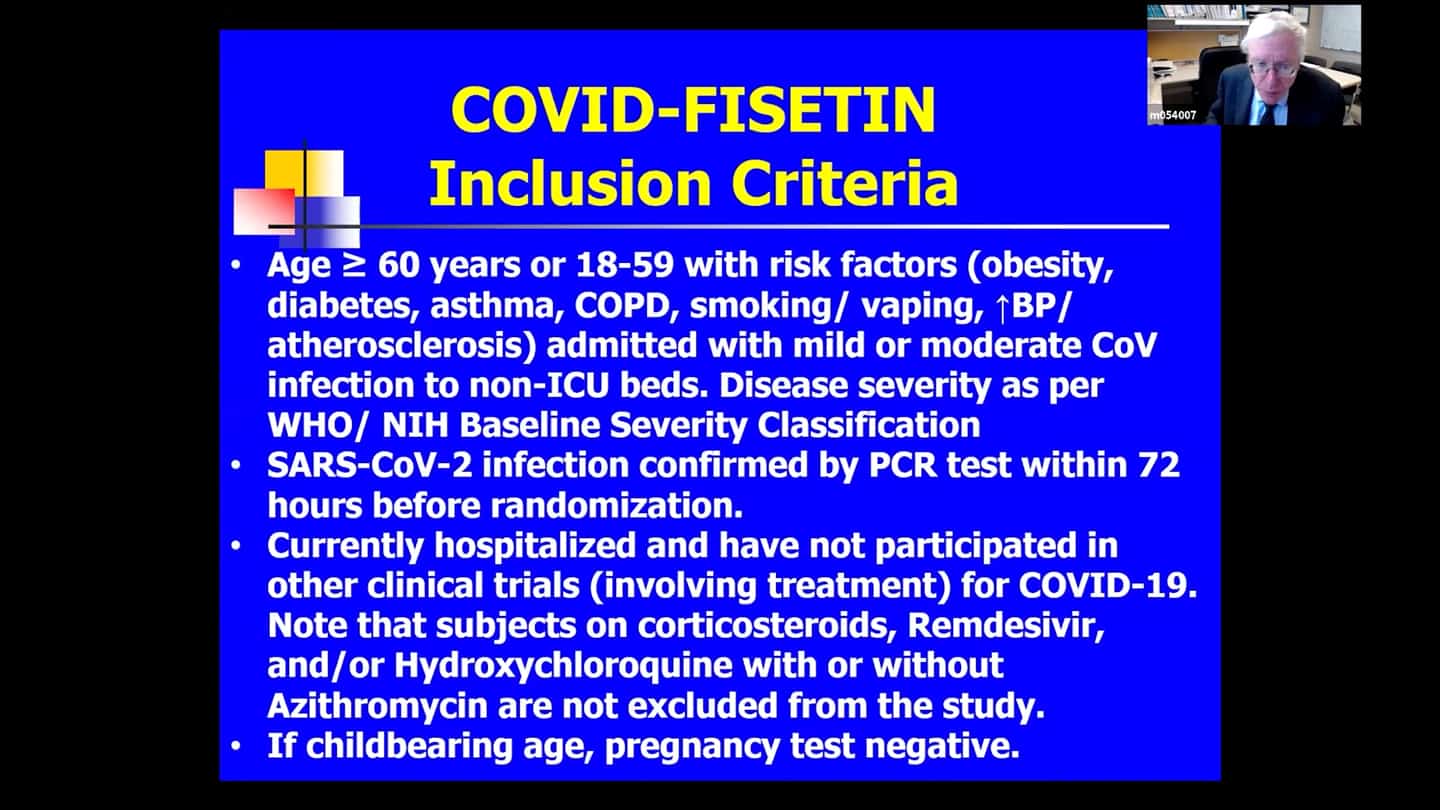 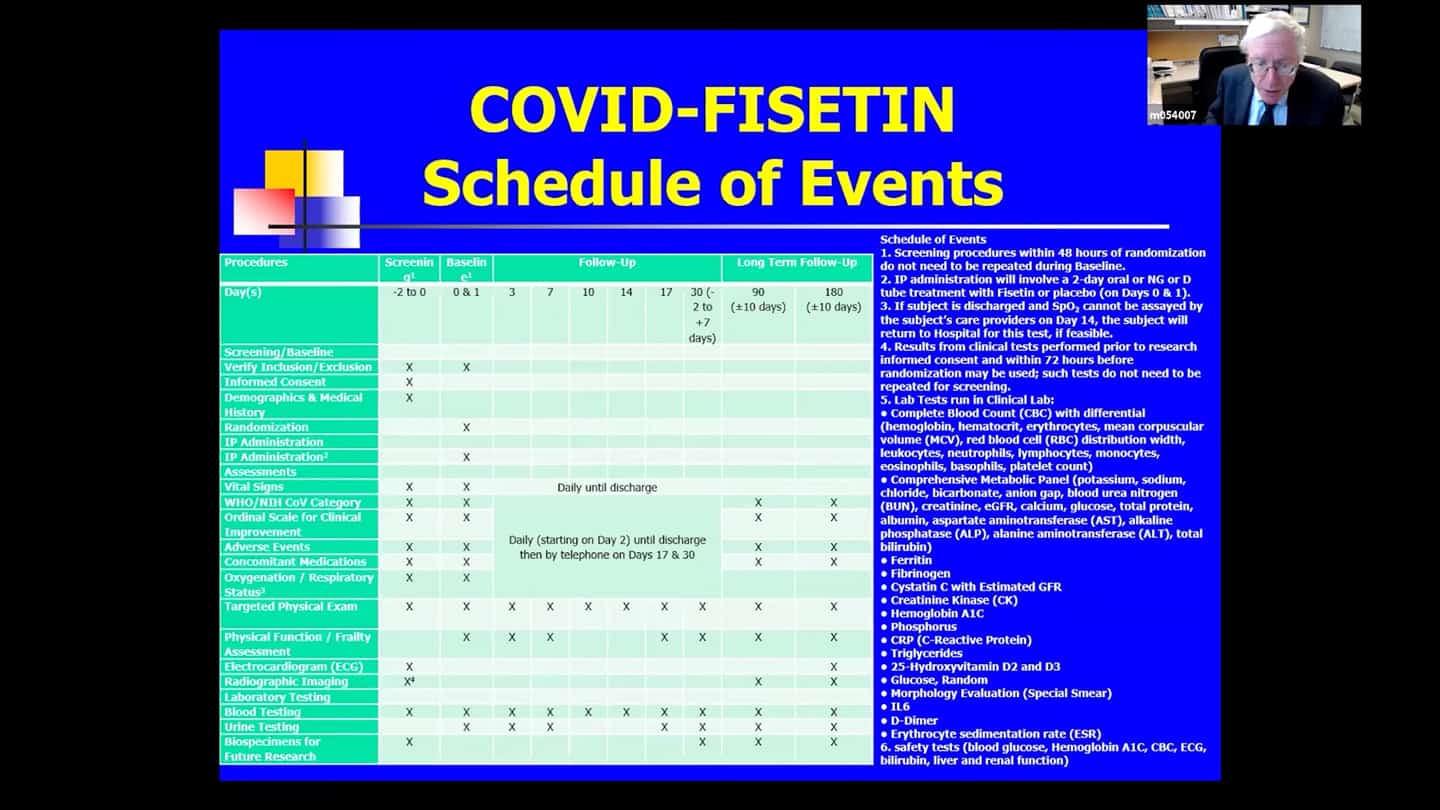 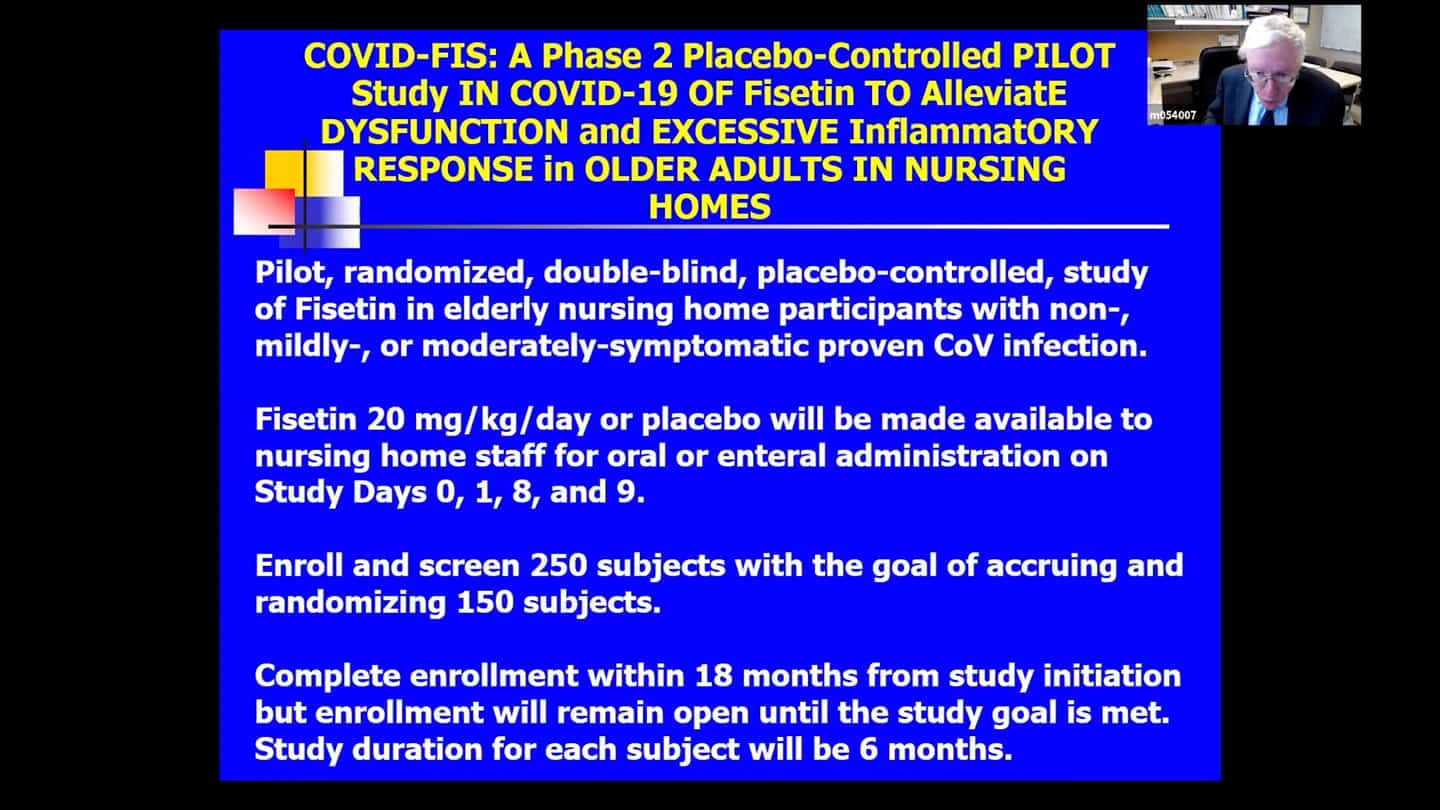 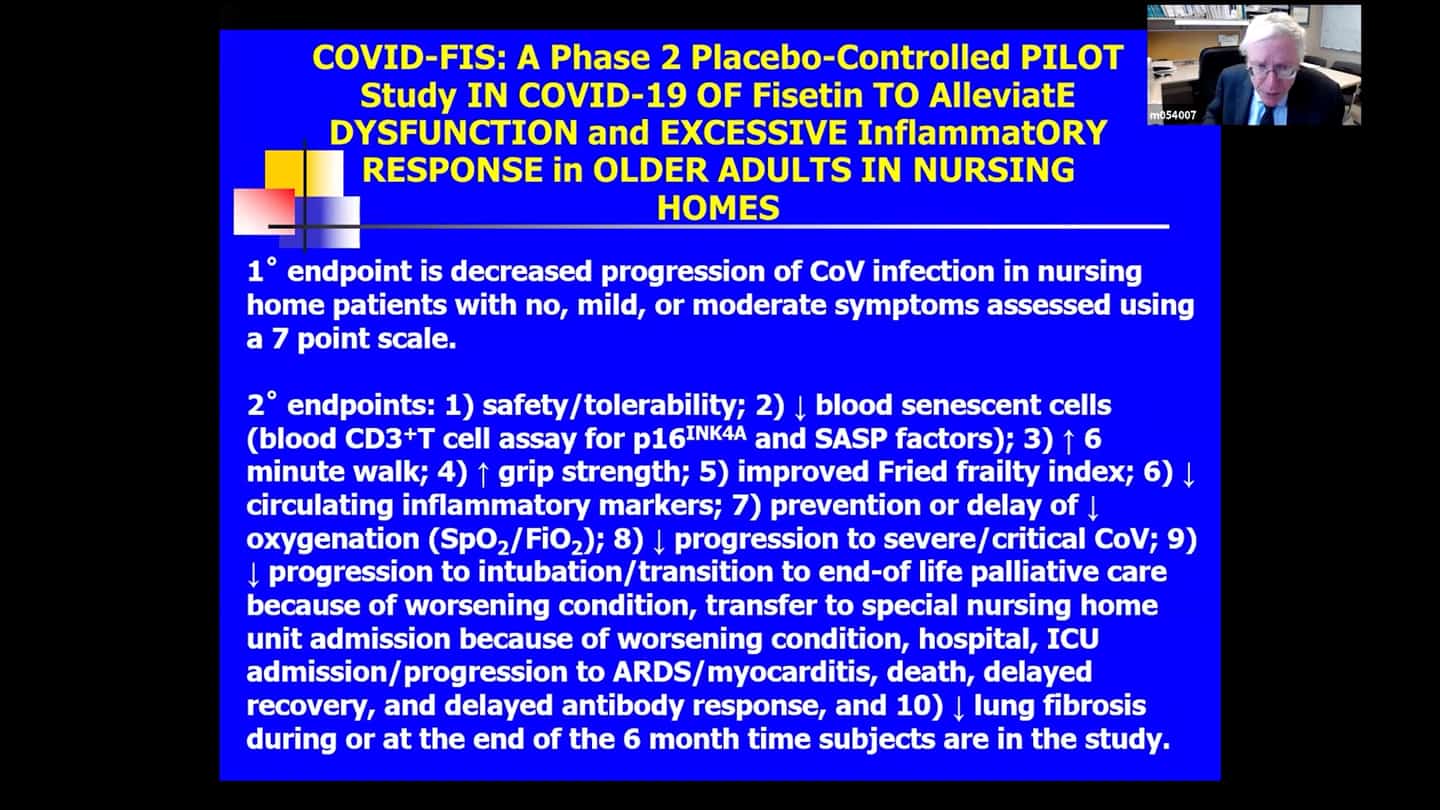 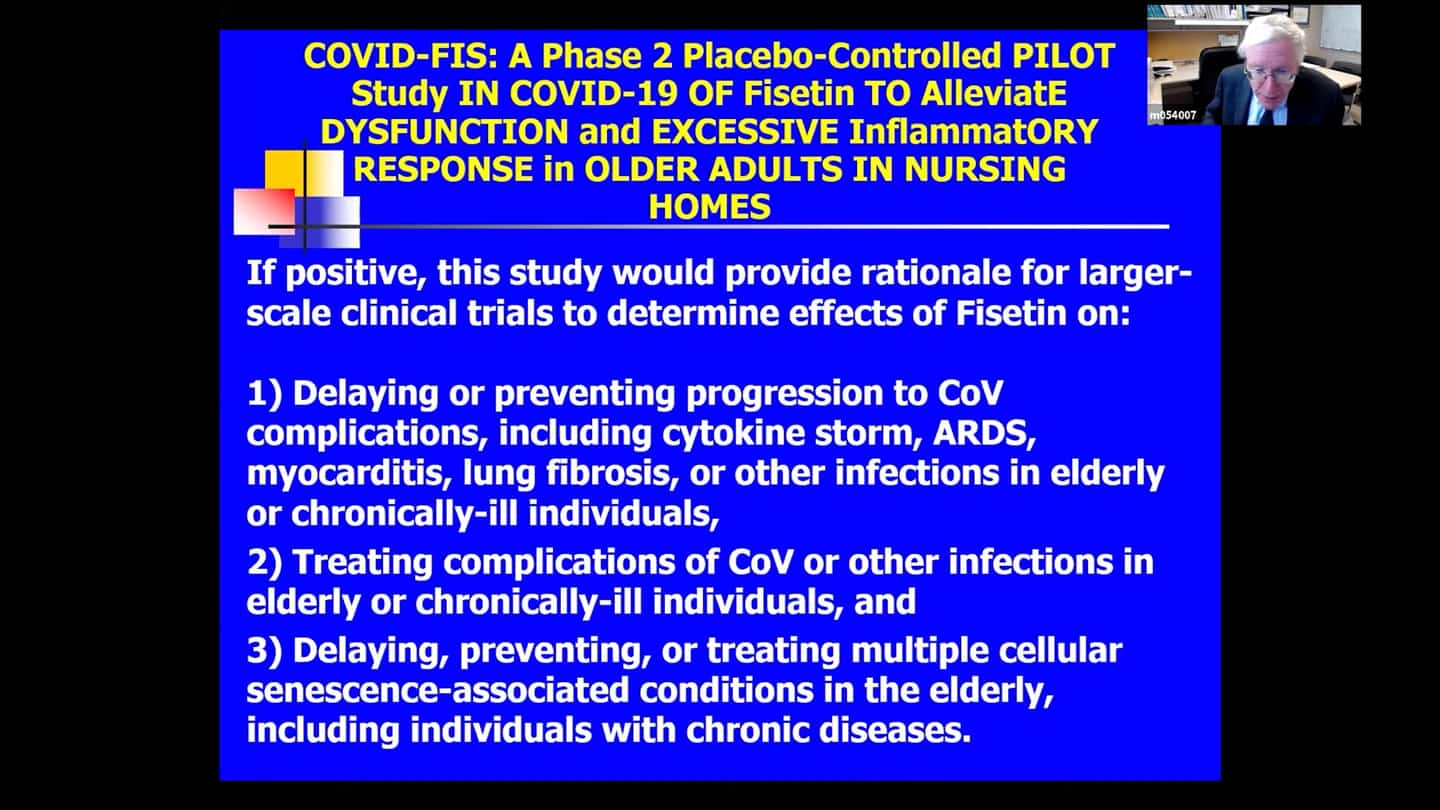 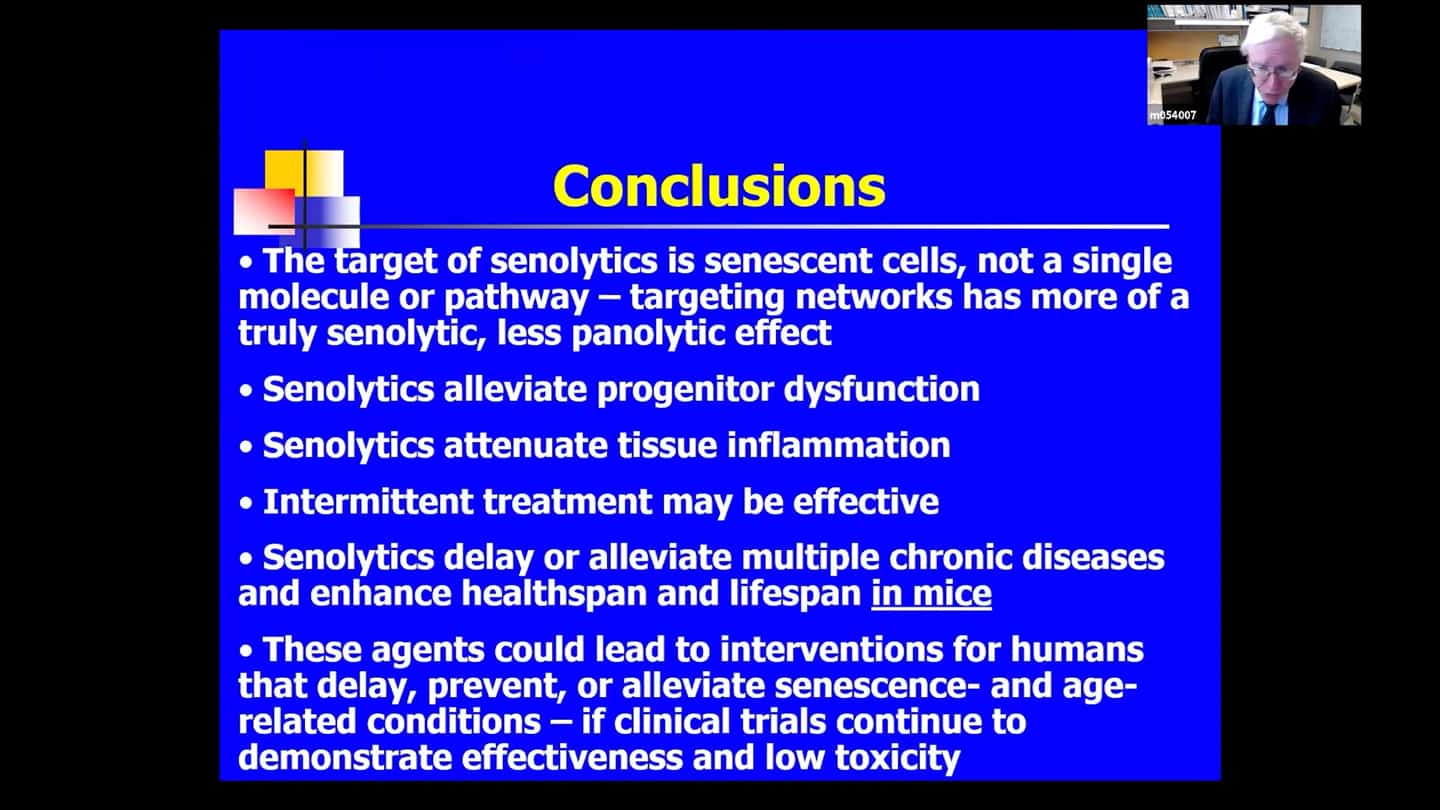 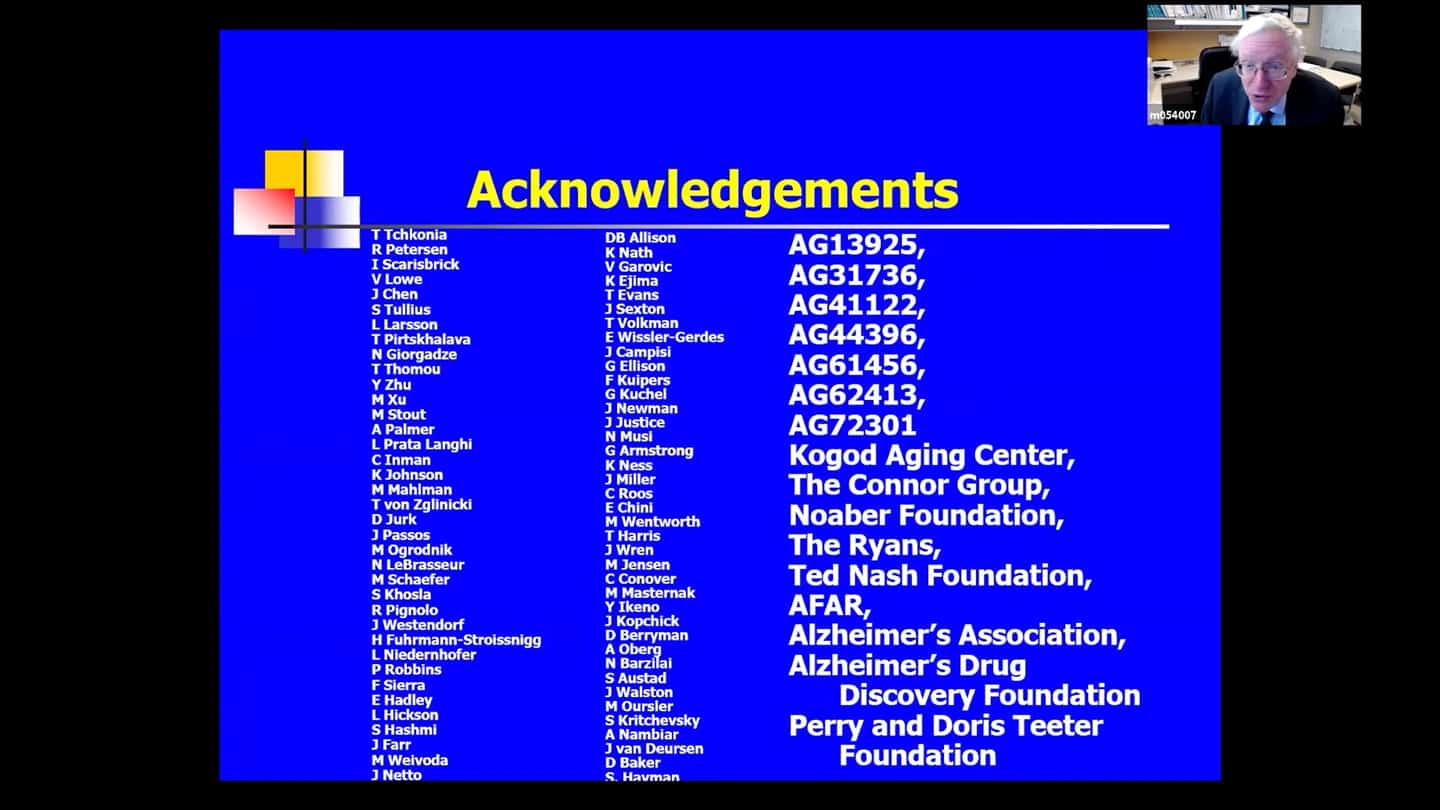 There are a lot of functions and properties and benefits of senescent cells that you went over in this presentation, at least in some cases. Is senescent really the right word? And how is it defined, is it just that they stop replicating and beyond that there are a lot of different possibilities of what they are doing – both good and bad?

You said that “mitochondrial DNA is released from senescent cells” – that sounds like a serious problem. What’s going on here? Is it purely maladaptive or is there some good reason for it? It looks like a serious failure inside the cell system.

Based on what you said about senescent cells and the Warburg effect – doesn’t that suggest that a really low carbohydrate diet might be senolytic?

What the difference is between sensecent and terminal differentiation and how do senolytics achieve specificity?

Will you be doing mid-term interim analysis in the trials that are at half-way point?

Quercetin & Fisetin aren’t as strongly regulated as drugs so actual amounts of active ingredients vary from labeled amounts, sometimes a lot. (Companies like ConsumerLab make a business of testing these kinds of things.) How do you source for the trials & what do you do to ensure accurate dosing?

Wound healing is important, so we don’t want to prevent cells from becoming senescent cells. In the case of wounds, we think most SnCs get cleaned up after. Do we know yet if that cleanup is less good with aging (maybe due to immunosenescence)? I.e., would we expect higher SnC burden in animals with higher rates of wounds?

Are you saying that all the types of senescent cells that are involved in wound healing do not have SASP? Or just some of them?

So as we undergo immunosenescence and maybe the cleanup is imperfect, would we expect that animals that get higher rates of idiosyncratic repeated wounds will end up with a higher senescent cell burden?

You said monthly hit-and-run dosing is as good as continuous. Would you expect annual dosing to be effective?

How much is the senescence of several layers of cells in the liver an adaptive response to the aggressive environment and how much could senolytics interfere with this response?

Are there any known negative interactions between the human immune system and senolytic therapy?

How much did you end up paying for that whole GMP for Fisetin work?  (CMC and the other IND-enabling studies)

Will that data be available for that whole process with Fisetin – purification, stability testing, and all that kind of stuff?

Do you have the clinical blood tests & expanded biochemistry tests from patients before and after administration of senolytics? Did you try any of the biological aging clocks trained on this data (e.g. Young.AI)?

I suspect it doesn’t make sense to do local when you’re looking at the very very frail which those trials seem to be, but as you start to look into trials for younger healthier people possibly there are conditions where there’s a very local high senescence cell burden that hasn’t spread out too much yet?

What can the group do to help with your work? What would be helpful?