When I woke up this morning, it was nine degrees below zero, Celsius.  It’s solidly overcast here, and what’s more, this time of year the sun doesn’t get much more than 20 degrees above the horizon — in the middle of an all-too-short day.

My house has a footprint of about 200 square meters.  At noon on a clear summer’s day that would be more than enough for all my power needs, even with current phovoltaics.  But when I would need it the most, the sun is missing in action.

In 1941 Isaac Asimov wrote a story about a solar power satellite (“Reason”) and there have been many written since.  In the 70s, serious plans were made to create them, but fell short mostly due to launch costs.  Today, SPS are getting a second serious look in the real world, including the fact that California gave regulatory approval for an SPS contract yesterday. (h/t FuturePundit)

Japan has a SPS project in the works as well.  The PopSci article about the Japanese project has the observation:

A major kink, presumably, is coping with the possible dangers when a 1-gigawatt microwave beam aimed at a small spot on Earth misses its target.

This is actually an element in the plot of the Asimov story, but in practice it’s very likely completely wrong.  In the American plans, at least, the power density at the rectenna is lower than ordinary sunlight:

At the earth’s surface, a suggested microwave beam would have a maximum intensity at its center, of 23 mW/cm^2 [i.e. 230 W/m^2] (less than 1/4 the solar irradiation constant), and an intensity of less than 1 mW/cm2 outside of the rectenna fenceline (the receiver’s perimeter).

and could be made in such a way that steering it away from the rectenna was impossible:

A commonly proposed approach to ensuring fail-safe beam targeting is to use a retrodirective phased array antenna/rectenna. A “pilot” microwave beam emitted from the center of the rectenna on the ground establishes a phase front at the transmitting antenna. There, circuits in each of the antenna’s subarrays compare the pilot beam’s phase front with an internal clock phase to control the phase of the outgoing signal. This forces the transmitted beam to be centered precisely on the rectenna and to have a high degree of phase uniformity; if the pilot beam is lost for any reason (if the transmitting antenna is turned away from the rectenna, for example) the phase control value fails and the microwave power beam is automatically defocused. Such a system would be physically incapable of focusing its power beam anywhere that did not have a pilot beam transmitter.

This would have a host of advantages.  First, it would obviate super-precise station-keeping and attitude control in the satellite.  It could allow multiple receivers to be fed from a given single transmitter array, and indeed even moving receivers.

Current plans for SPS power call for a kilometer-scale rectenna feeding into the power grid.  But suppose that by increasing the size of the transmitter you could focus the beams onto a ten-meter circle (e.g., my house). 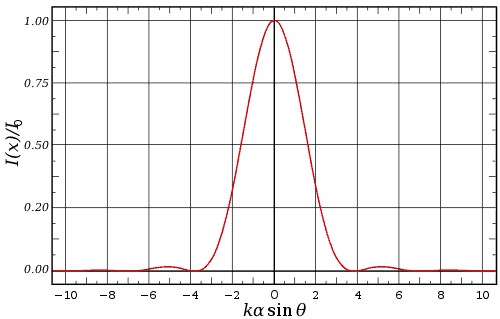 The Rayleigh criterion says that to focus 12 cm waves on a 10-meter spot from geosynchronous orbit, you need a transmitting antenna a thousand kilometers in diameter.  You can reduce the antenna size by using a higher frequency, but that loses energy to atmospheric absorption if you go too high. There appears to be an absorption trough at 30 GHz (1 centimeter) but you lose about 10% of the power to the air. That might be worth it to build a satellite only (!) 100 km wide.

Obviously you need nanotech for this, both for affordable launch and to keep the mass of the satellite down.  But why would you want to do something like that in the first place?  Because it replaces not only earthbound power generation but the grid as well.  It would be a substantial chunk of infrastructure (if we can use that word for something overhead 🙂 ) but it would replace an even more substantial chunk.  10-meter rectennas would not only allow most buildings to take power directly from the satellite, but also trains, planes, and ships (but not cars).