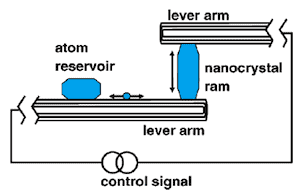 Last month we posted a report of a powerful new type of nanoengine, able to deliver a force of ~5 nN (nanonewtons). The authors noted that “The resulting nanoscale forces are several orders of magnitude larger than any produced previously.” A couple weeks later Foresight Senior Fellow—Standards David R. Forrest wrote to challenge that comparison:

Cambridge claimed: “The forces exerted by these tiny devices are several orders of magnitude larger than those for any other previously produced device”

I don’t think that is true.

Given the similar sizes, and noting that the gold nanoparticles ALSO require the surrounding polymer mass as part of the actuation system, I think Zettl’s device has the edge regarding smallest total mass although it’s hard to beat Cambridge’s I/O (light). Also I would note that Zettl’s actuator was positioned on a fixed CNT surface, which allowed the force to be applied at a known location; not true for the particles in suspension. To get useful work out of the device there would need to be attached substrates/levers/something. (More mass, then.)

Prof. Zettl was the winner of the 2013 Feynman Prize for Experiment, recognizing “Prof. Zettl’s exceptional work in the fabrication of nanoscale electromechanical systems (NEMS), spanning multiple decades and including carbon nanotube-based bearings, actuators, and sensors brought to fruition with cutting-edge nanoscale engineering.” The linear nanomotor that Dr. Forrest cites above was part of those decades of exceptional work “Nanocrystal-Powered Nanomotor” BC Regan et al, Nano Lett., 2005, 5 (9), pp 1730–1733 (abstract). What will turn out to be the most useful way(s) to power nanodevices remains an open question, but we are fortunate to have options to explore.
—James Lewis, PhD