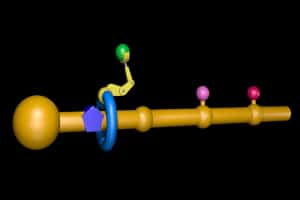 Nature has evolved a partial system of molecular manufacturing. Although not capable of making arbitrarily complex, atomically precise structures that faithfully represent the immense diversity of chemically feasible structures, biology very early on evolved a method of assembling a wide range of molecular machines by linking particular types of subunit molecules together in a defined sequence. The structure that makes the most complex biological molecular machines is the ribosome, a complex of two subunits 20 to 30 nm in diameter and comprising several dozen RNA and protein molecules, which works with hundreds of other RNA and protein molecules to link amino acids together as specified by genetic information to make specific protein molecules. Scientists in the UK have succeeded in mimicking this basic process using a simple artificial molecular machine bearing no resemblance to the ribosome and an order of magnitude smaller in linear dimension than the ribosome. A hat tip to Phys.org for reprinting this University of Manchester news release “Molecular machine could hold key to more efficient manufacturing“:

An industrial revolution on a minute scale is taking place in laboratories at The University of Manchester with the development of a highly complex machine that mimics how molecules are made in nature.

The artificial molecular machine developed by Professor David Leigh FRS and his team in the School of Chemistry is the most advanced molecular machine of its type in the world. Its development has been published in the journal Science [abstract].

Professor Leigh explains: “The development of this machine which uses molecules to make molecules in a synthetic process is similar to the robotic assembly line in car plants. Such machines could ultimately lead to the process of making molecules becoming much more efficient and cost effective. This will benefit all sorts of manufacturing areas as many manmade products begin at a molecular level. For example, we’re currently modifying our machine to make drugs such as penicillin.” …

Professor Leigh’s machine is based on the ribosome. It features a functionalized nanometre-sized ring that moves along a molecular track, picking up building blocks located on the path and connecting them together in a specific order to synthesize the desired new molecule.

First the ring is threaded onto a molecular strand using copper ions to direct the assembly process. Then a “reactive arm” is attached to the rest of the machine and it starts to operate. The ring moves up and down the strand until its path is blocked by a bulky group. The reactive arm then detaches the obstruction from the track and passes it to another site on the machine, regenerating the active site on the arm. The ring is then free to move further along the strand until its path is obstructed by the next building block. This, in turn, is removed and passed to the elongation site on the ring, thus building up a new molecular structure on the ring. Once all the building blocks are removed from the track, the ring de-threads and the synthesis is over.

Professor Leigh says the current prototype is still far from being as efficient as the ribosome: “The ribosome can put together 20 building blocks a second until up to 150 are linked. So far we have only used our machine to link together 4 blocks and it takes 12 hours to connect each block. But you can massively parallel the assembly process: We are already using a million million million (1018) of these machines working in parallel in the laboratory to build molecules.”

Professor Leigh continues: “The next step is to start using the machine to make sophisticated molecules with more building blocks. The potential is for it to be able to make molecules that have never been seen before. They’re not made in nature and can’t be made synthetically because of the processes currently used. This is a very exciting possibility for the future.”

An animation illustrating how the molecular machine works is available on YouTube. Professor Leigh was the winner of the 2007 Foresight Institute Feynman Prize in Theory for the design and synthesis of artificial molecular machines.

The small molecular machine in this work is based upon a rotaxane molecule, in which a dumbbell-shaped molecule is threaded through a macrocycle. The dumbbell is constructed from two components: a “stopper”, and a “strand”, along which the amino acids to be added are linked. A chemical moiety that will link with the stopper defines the front of the strand. The order of the amino acid subunits in the peptide molecule to be manufactured is determined by the order in which the reactive building blocks are positioned along the molecular strand, with the first one nearest the front, and the last at the opposite end of the strand. Following the practice for solid state chemical synthesis of peptides pioneered by Bruce Merrifield half a century ago, the amino groups of the amino acids are protected with a chemical group that keeps them from reacting prematurely. The third component of the rotaxane is the macrocycle, which has a site at which the reactive arm of the molecular machine will be attached.

Three amino acids are linked to the strand, separated from each other by rigid spacers: phenylalanine at the front, then leucine, then alanine. As with conventional solid state peptide synthesis, the peptide will be synthesized from the C-terminal to the N-terminal end, the opposite of direction of synthesis on the ribosome. The rotaxane is assembled in a chemical reaction catalyzed by copper ions in which the macrocycle is guided over the front of the strand as the strand is linked to the stopper. The macrocycle is held in place, at the point where the stopper and strand join, by a bulky substituent on the outside of the stopper, which forms one end of the dumbbell, and by the first amino acid (phenylalanine) on the strand, which forms the other end.

A second chemical reaction added to the macrocycle the reactive arm responsible for manufacturing the peptide. The reactive arm is a tripeptide (GlyGlyCys) attached to the macrocycle by its C-terminal cysteine residue. The thiolate group of the cysteine and the N-terminus of the tripeptide are both blocked by chemical protective groups to render them non-reactive. The machine is activated by acid-catalyzed removal of the protective groups from the thiolate, from the amino terminus of the reactive arm, and from the amino groups of the three amino acids on the strand.

The process repeats twice more until all three amino acids have been removed from the strand and attached to the N-terminus of the peptide growing on the reactive arm. With no amino acids left on the strand, the macrocycle is free to slide off the end, bearing the newly formed hexapeptide: AlaLeuPheGlyGlyCys.

Clearly this novel artificial molecular machine was able to mimic essential features of ribosomal protein synthesis, as intended. Once the reaction was initiated, the synthesis was completed without further manipulation. As noted by the authors, major limitations include the very slow rate of synthesis, the destruction of the template after the synthesis is completed, and that the size of the peptide produced my be limited by the nature of the transition state of the machine during each cycle. Nevertheless, this work has demonstrated:

… that relatively small, highly modular, artificial molecular machines can be designed to autonomously perform iterative tasks in synthesis. The principles employed in the design and operation of 1 should be broadly applicable to other types of monomer and chemical reactions …

From the standpoint of the eventual development of molecular manufacturing, the important question will be whether or not this type of molecular machine can be extended to do more general positional control of chemical synthesis, or will it be limited to linking monomers together to form various types of folding polymers?
—James Lewis, PhD