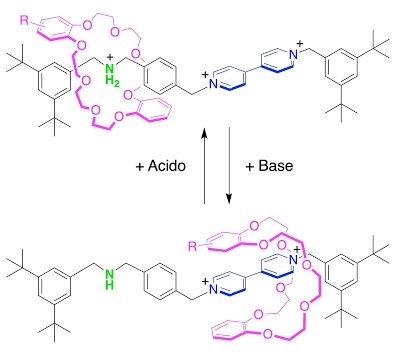 Mechanically interlocked molecules (MIMs), such as rotaxanes and catenanes, provide a fertile opportunity to study some of the complexities of large biological systems of molecular machines, composed of large protein molecules, with small molecular machines composed of small organic molecules containing components that can move relative to each other in response to external control. The Foresight Institute recognized the usefulness of MIMs for development of advanced nanotechnology with the award of the 2007 Feynman Prizes for Theoretical work to David Leigh FRS and for Experimental work to Sir J. Fraser Stoddart. The great potential of these small molecular machines was further recognized by the award of the 2016 Nobel Prize in Chemistry to Jean-Pierre Sauvage, Sir J. Fraser Stoddart, and Bernard L. Feringa. News of another way in which the dynamic properties of MIMs may lead, through mechanical communication of molecular information, to deeper insights into allosteric communication mechanisms of enzymes, and perhaps to the improvement of technology involving fuel cells, sensors, catalysts, and electrochemical devices comes in a press release from the University of Bologna, forwarded to Foresight by Giulio Ragazzon, the first author of the cited research “Hermes, The First Communication System For Molecules”:

It is the first artificial system in which remote parts of a molecule communicate by a dynamic mechanism. Nature uses an analogue strategy in the cellular respiration.

The unprecedented case of two different remote parts of a synthetic molecule that can dynamically exchange chemical information is described. This strategy is employed to change in a controlled manner the acidity of a molecule that becomes 10 million times less acidic: the biggest change ever obtained with an artificial molecule. In our body the process that converts nutrients in energy exploits a similar mechanism, which is still partly unknown and was never mimicked before.

As reported today in the prestigious journal PNAS [abstract, full text], the system — nicknamed Hermes — was designed, synthesized and operated by a research team based at the University of Bologna and National Research Council of Italy (CNR), led by professors Alberto Credi and Marco Lucarini.

The key component of this communication system is a rotaxane, constituted by a ring-like molecule surrounding a thread-like molecule. The ring is free to shuttle along the thread, but it cannot escape because two “stoppers” prevent its dethreading. It is thanks to this shuttling ability that the ring enables the communication between the two extremities. One of these extremities is capable of receiving electric signals, whereas the other one is responsible for the acid/base properties. When an electron is caught by the first site, the ring transfers the information to the other extremity, causing a change of the acidity of the molecule. Therefore the ring acts as a messenger, from which the nickname Hermes (the messenger of the Greek Gods) derived. The absolute novelty of Hermes is that it can provide communication between two distant regions of a molecule that would otherwise be isolated in a rapid, efficient and selective manner. It represents an incredibly challenging task that Nature performs with highly sophisticated chemical structures. Hermes achieves the same result in a system of just a few atoms, easy to synthesize with common synthetic techniques. The rotaxane is one nanometer (a billionth of a meter) long.

Very similar systems were synthesized and investigated at the end of the 1990s in the area of molecular machines (a field awarded with the Nobel Prize in Chemistry last year), but nobody ever realized such a unique behavior. The discovery happened thanks to a surprising and initially inexplicable experiment: the only possibility to justify the experimental observations was that the molecule was able to put the two distal extremities in communication. “During the experiments I realized that the behavior of the rotaxane radically changed in the presence of different bases” — tells Giulio Ragazzon, the young researcher who participated in the work — “Thanks to the collaboration with the group of Prof. Lucarini, which studies the behavior of unpaired electrons with magnetic resonance techniques, it was possible to confirm our hypothesis, directly observing the ring position along the thread when the molecule receives an electron”.

Hermes deals with two fundamental subjects for molecular systems: long range communication and the coupling of electrical and chemical signals. The operation of most enzymes, natural molecules at the basis of life, relies on the former subject. The latter one lies at the foundation of key biological processes like photosynthesis and respiration, as well as of technological areas like fuel cells, sensors and catalysis. For this reason the discovery may have an impact well beyond the chemistry domain; indeed, the study is published in PNAS (Proceedings of the National Academy of Sciences), an important journal which covers all areas of Science, and not in a specialized chemistry journal as it usually happens.

With Hermes the researchers convert an electric signal into an acidity change; the same strategy, however, may be applied to process light signals or to release at will other molecules. Therefore this work could be relevant for the fields of energy conversion and drug delivery.

Hermes is the result of a project started about three years ago, in the framework of the activities of the Center for Light Activated Nanostructures (CLAN) leaded by Prof. Alberto Credi. CLAN is a joint research laboratory set up by the University of Bologna and the CNR, whose the mission is the development of nanoscale molecular systems and materials able to perform actions activated by light or related stimuli. This study is the result of collaboration between CLAN and the group of Chemistry of Free Radicals at the Chemistry Department “Ciamician” of the University of Bologna. …

The fundamental concept at the basis of this research is the mimicking in artificial systems of what Nature does to form structures, obtain mechanical movements and communicate using proteins and enzymes. In this specific case the focus is on the ability to communicate and convert a signal. In performing these studies, chemists operate like engineers and architects, however manipulating systems a billion times smaller, since their building blocks are molecules. The realization of artificial machines and motors of nanometer size is of great interest for the growth of nanotechnology, that is, a technology that allows the construction of highly miniaturized structures and devices. It is generally considered that nanotechnology will not only lead to lighter, tougher and smarter materials and to smaller and more powerful computer, but also revolutionize medicine and other areas of science and technology.

The results show that the protonation of an ammonium site at one end of the axle can be reversibly modulated through an electron transfer at the bipyridinium site at the opposite end of the axle, which can exist as either a radical cation (one unpaired electron spin and one positive charge) or a dication (two positive charges). The electron transfer (redox reaction) at the bipyridinium changes the affinity of the crown ether macrocycle for the bipyridinium site. The protonation state of the dibenzylammonium site will depend on whether the macrocycle resides there or on the bipyridinium site. Thus the movement of the ring between two sites on the axle carries information between the two distant sites because the chemical or electrochemical state of one site determines the affinity of the ring to that site, and thus whether it stays or moves to the other site.

Biological molecular machine systems, small organic molecular machines with mechanically interlocked molecules, DNA origami machine systems, and combinations of various types of chemical scaffolds and catalysts, or scanning probes have been demonstrated or can be envisioned to build complex structures with atomic precision. The variety of nanostructures and functions that exist or seem possible is impressive. How can they be combined and/or improved to fill specific technological roles? What will be the limit to what we can build with them? Is there a path (or paths) to general purpose, high throughput atomically precise manufacturing?
—James Lewis, PhD