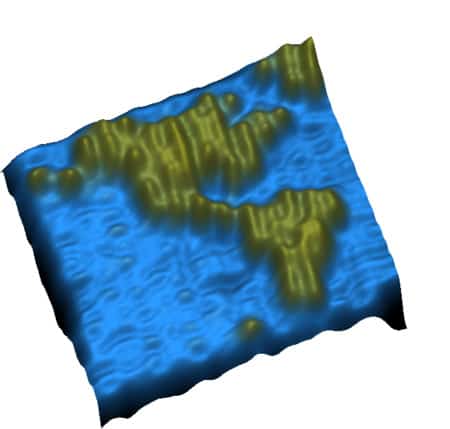 Now Paul Rothemund, a computer scientist at Caltech, with a background in biology, has developed a relatively inexpensive way to quickly design and build arbitrary shapes and patterns using DNA — and, he says, it’s simple enough for high-school students to use…

It’s really spectacular work. I’m extremely excited about it,” says William Shih, professor of biological chemistry and molecular pharmacology at Harvard Medical School, who is now working to extend Rothemund’s technique to building three-dimensional structures. Rothemund’s work, he says, has taken the small field of DNA nanotechnology and “opened it up to becoming a mainstream tool by making it one or two orders of magnitude cheaper and easier to do.”

Nadrian Seeman, the New York University chemist who pioneered the use of DNA for constructing complex shapes, says, “By moving up in scale, he is able to produce more intricate and larger patterns than were practical with previous approaches. This is an exciting advance which is likely to revolutionize pattern formation on this scale.”

Both Rothemund and Seeman are winners of the Foresight Feynman Prize in Nanotechnology.  Bravo, Paul!  (Update: this story is from 2006! oops)  —Chris Peterson