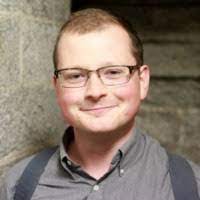 After receiving an undergraduate degree in chemistry from Northwestern, Tom pursued a Ph.D. in chemical engineering under Michael Mayer at the University of Michigan, which he received in 2017 after moving with the group to the Adolphe Merkle Institute in Fribourg, Switzerland in early 2016. There, he and his coworkers designed an electrical power source made of gels and salt that was based on the anatomy of the electric eel and was capable of generating over 100 volts. Since late 2018, Tom has been working as a postdoctoral fellow in Joanna Aizenberg’s lab at Harvard. Tom is interested in the ways in which biological macromolecules mediate ion transport in living systems to produce emergent functions that enable complex life. For example, the opening and closing of ion channels in insulating membranes underlies the function of the nervous system, and the precise deposition of salts from solution onto protein templates enables the formation of skeletal structures such as bone with controlled morphologies. Tom seeks to learn from these processes and apply the lessons to the design of synthetic materials. His current research focuses on using responsive chemistry and polymer physics to control the generation of electrical signals and the growth of crystals in polymeric systems.