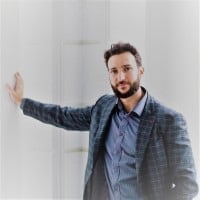 Iosif M. Gershteyn is a serial entrepreneur with a track record of founding companies in the biologics and medical device industries. Upon completing his graduate studies in international economics and finance at Brandeis University in 2009, he started his career in asset management working on long-term qualitative investment strategies. Subsequently, he worked in corporate strategy (including mergers and acquisitions) and ultimately embarked on a career in technology entrepreneurship. Alongside his primary occupation, he pursued interests in biology (neuroscience, immunology and physiology) after the completion of his formal education. These interests led him to found the Immunodietica project, which generates published research in the fields of immunology and computational systems biology. Since 2016, he has chaired the Ajax Biomedical Foundation and believes that computational systems have underexplored promise in multiple applications of human health, finance, and complex systems analysis. He is currently CEO of ImmuVia, an oncology therapeutics company.