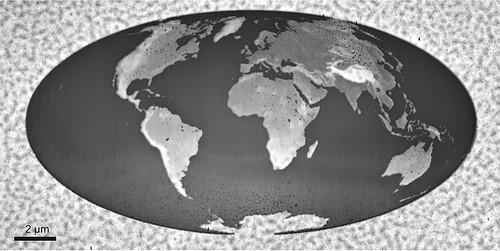 IBM researchers in its Zurich lab have drawn–or rather, carved–a three-dimensional map of the world that’s 22 micrometers east to west by 11 micrometers north to south. At that size, about 15 of the maps could be wrapped end to end long-ways around a strand of human hair, by our math.

In a process the researchers describe in articles published today in Scienceand Advanced Materials, they used a silicon needle with a tip about ten thousand times smaller than an ant to sculpt a polymer material known as polyphthalaldehyde. By heating the needle to between 300 and 500 degrees centigrade, they were able to melt and evaporate tiny segments of the material without disturbing those particles’ neighbors…

IBM’s researchers hope that it could someday be used to craft circuit boards at smaller sizes than e-beam lithography is used to etch them today, or even build tiny nanobots or other tiny mechanical structures that could travel inside the human body or other nanoscale environments.