Ever since Richard Feynman lamented in his 1959 talk “There’s Plenty of Room at the Bottom” that the electron microscope failed by two orders of magnitude to image individual atoms, a general method of imaging nanostructures to atomic resolution has been an integral part of the Feynman vision of what was later called nanotechnology: the construction of atomically-precise products through the use of molecular machine systems. Imaging proteins to atomic resolution is a necessary subgoal of Eric Drexler’s 1981 proposal that protein design could provide an approach to develop general capabilities for molecular engineering and molecular manipulation. X-ray crystallography has been the gold standard for obtaining atomically precise structures for proteins and other nanostructures, but this method requires substantial amounts of crystalline material, and not all proteins, and certainly not all nanostructures, are available in crystalline form. Nadrian C. Seeman, the pioneer of DNA nanotechnology, one of the most promising roads to atomically precise manufacturing (APM), has said that “The first goal is to use our branched DNA system to scaffold the organization of biological macromolecules into crystalline arrays, thus overcoming the crystallization problem of biological crystallography. This will enable the 3D structural characterization of potential drug targets, leading to rational drug design.” The electron microscope has been greatly improved since Feynman’s time and some success has been obtained in using DNA nanotechnology to organize proteins for structure determination. However, another option is now available. A blog by Derek Lowe discusses a paper from a group at the University of Tokyo published in Nature earlier this year [abstract] that uses porous metal-organic frameworks (MOFs) as ‘chemical sponges’ as ‘hosts’ to soak up very small quantities of small to mid-sized molecules as ‘guests’ so that X-ray crystallography of the host-guest complex provides the structure of the guest molecule. From “X-Ray Structures Of Everything. Without Crystals. Holy Cow“:.

… This latest paper demonstrates that if you soak a solution of some small molecule in a bit of crystalline porous “molecular sponge”, you can get the x-ray structure of the whole complex [emphasis in the original], small molecules and all. If you’re not a chemist you might not feel the full effect of that statement, but so far, every chemist I’ve tried it out on has reacted with raised eyebrows, disbelief, and sometimes a four-letter exclamation for good measure. … 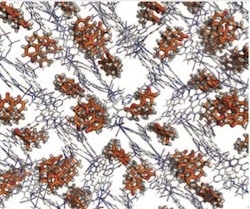 The crystalline stuff in question turns out to be two complexes with tris(4-pyridyl)triazine and either cobalt isothiocyanate or zinc iodide. These form large cage-like structures in the solid state, with rather different forms, but each of them seems to be able to pick up small molecules and hold them in a repeating, defined orientation. Shown is a lattice of santonin molecules in the molecular cage, to give you the idea.

Just as impressive is the scale that this technique works on. They demonstrate that by solving the structure of a marine natural product, miyakosyne A, using a 5-microgram sample. I might add that its structure certainly does not look like something that is likely to crystallize easily on its own, and indeed, no crystal is known. By measuring the amount of absorbed material in other examples and extrapolating down to their X-ray sample size, the authors estimate that they can get a structure on as little as 80 nanograms of actual compound. …

With the help of Google Scholar, I found full text PDFs of the original Nature article here and here. Nature News also comments on the research article.

Although the pores used in this paper are not large enough to accept protein molecules as guests, Lowe points to a recent paper in Science on a series of MOFs with pore apertures ranging from 1.4 to 9.8 nm—large enough to accept proteins or other interesting nanostructures or molecular building blocks. As often the case with advances in the molecular sciences, the motivation for the research appears to be basic science or biotechnology. Nevertheless, the ability to obtain atomically precise structural information for minute quantities of difficult or impossible to crystallize molecules and nanostructures could greatly facilitate developments leading to APM. Last year we cited the potential of MOFs as “building blocks in the molecular machine path to molecular manufacturing”. At the very least, they appear likely to indirectly accelerate progress by providing structural information for a wide variety of useful nanostructures. Whether or not they could eventually supplement DNA scaffolds as ways to organize a complex set of components of molecular machine systems could depend upon whether methods can be found to address individual pores within the MOFs.
—James Lewis, PhD