Just a week ago I was at NIST to hear a talk by Paul Rothemund, winner of the 2006 Feynman Prize with Erik Winfree for the invention of DNA Origami. In just 3 years this has taken off in a big way.

This story at Nanowerk News reports the latest:

Danish researchers have made a nano-sized box out of DNA that can be locked or opened in response to ‘keys’ made from short strands of DNA. By changing the nature or number of these keys, it should be possible to use the boxes as sensors, drug delivery systems or even molecular computers (“Self-assembly of a nanoscale DNA box with a controllable lid“). 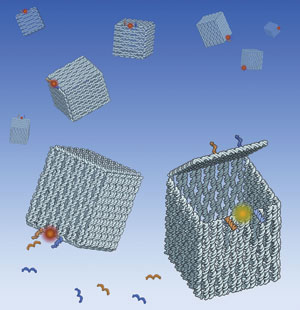