In this session, Christopher Leptak, the Director New Drug’s Regulatory Science Program Office in the FDA’s Center for Drug Evaluation and Research, elucidated how is FDA approaching biomarkers specifically for drug development, what is actually considered a biomarker and wha needs to happen for a new biomarker to be used. Apart from valuable tips and insights about the process, and range of resources on how to prepare for it, he also offered his opinion on the way the longevity field could approach biomarkers with relation to aging. 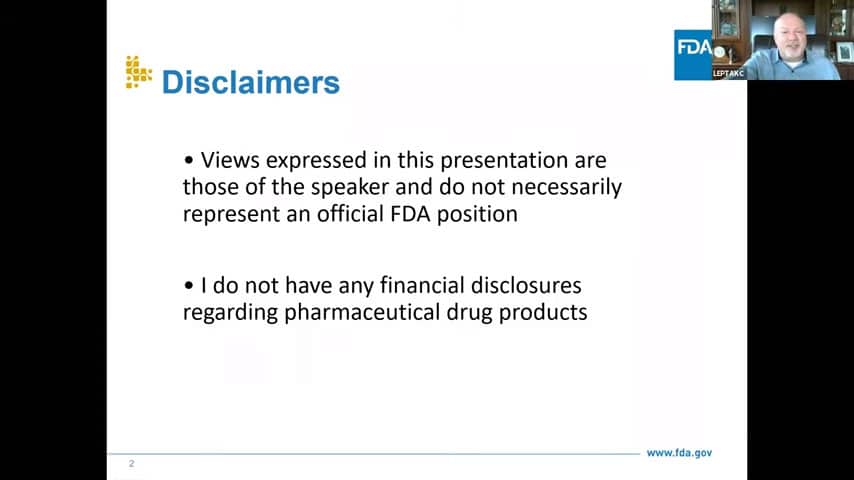 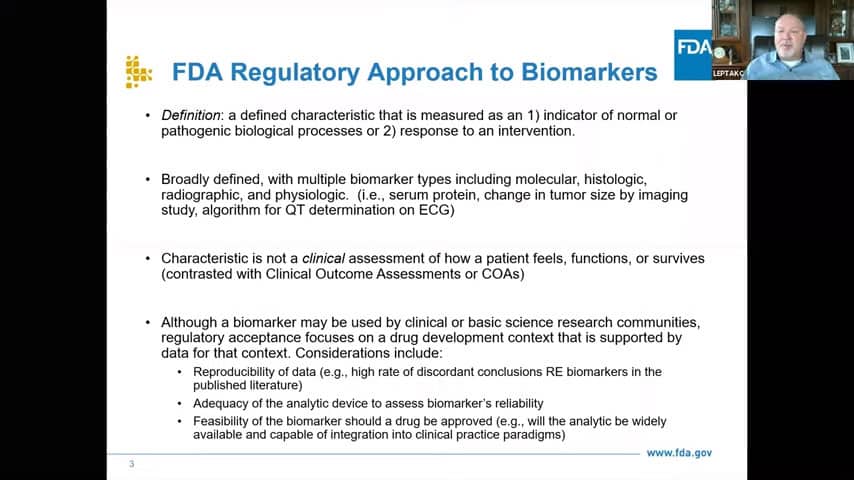 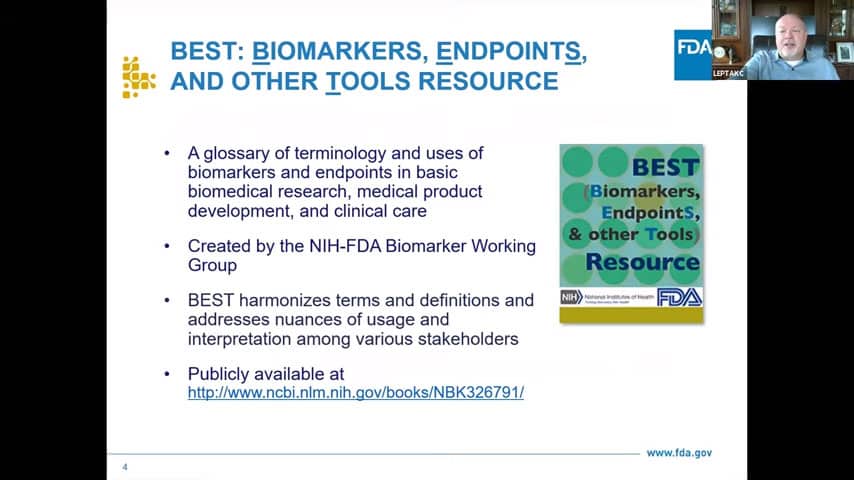 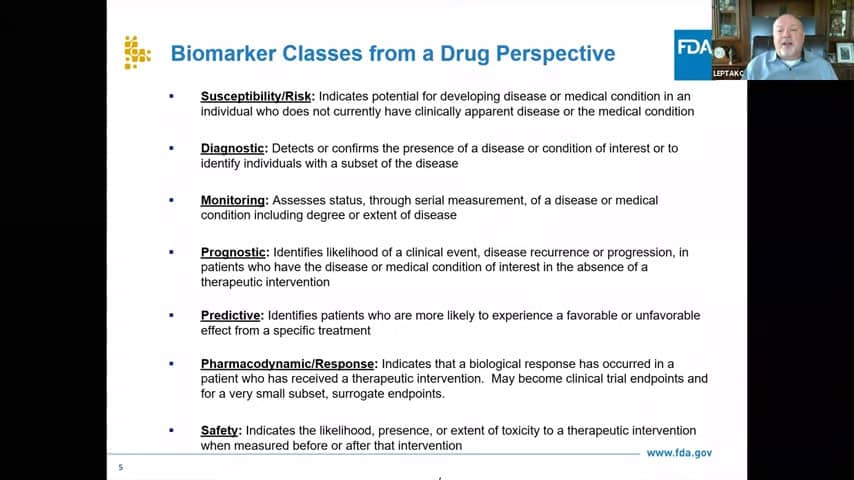 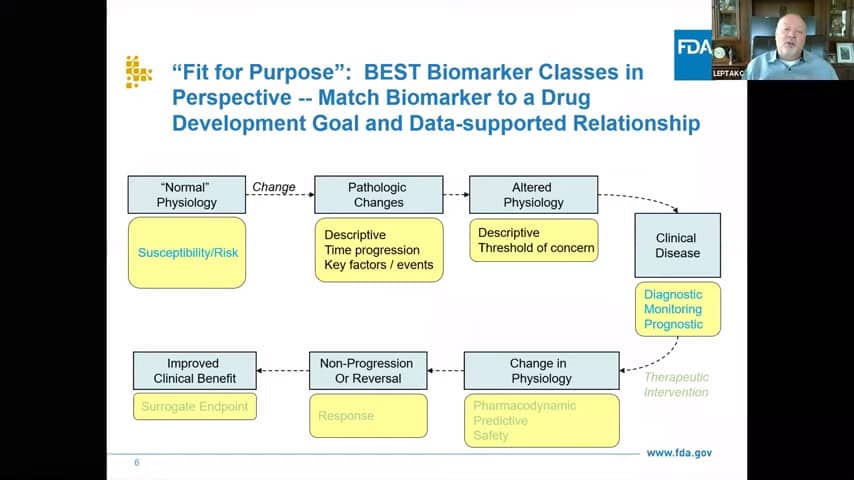 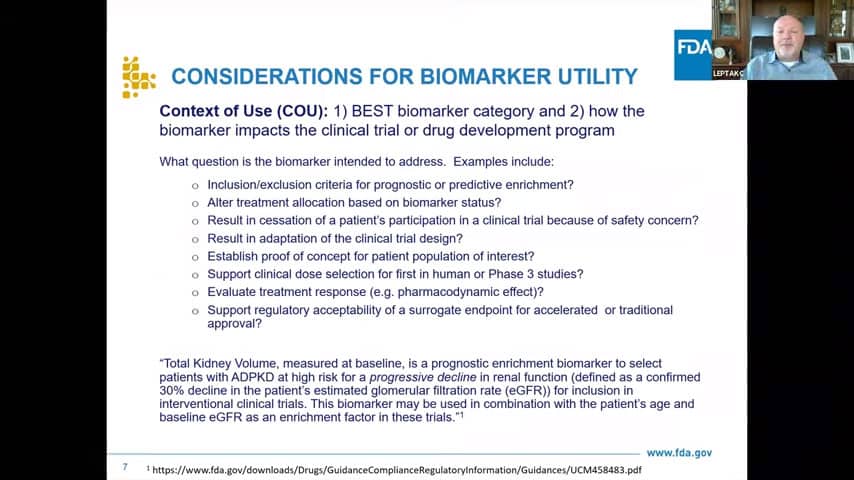 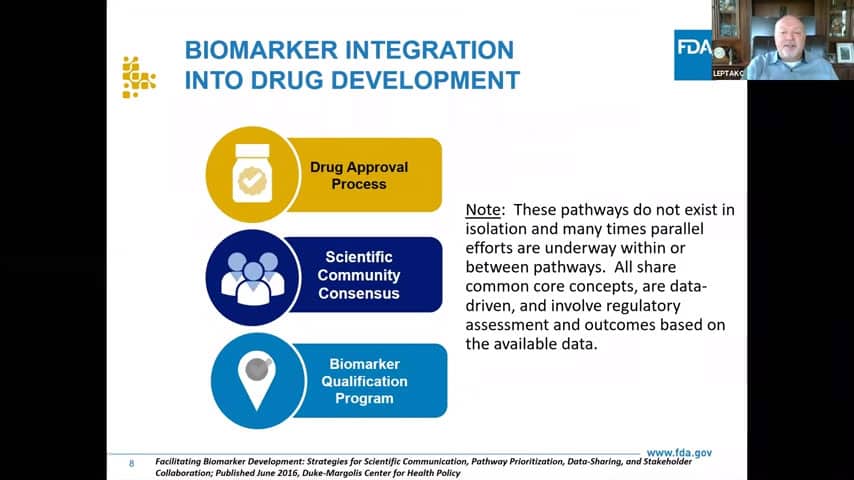 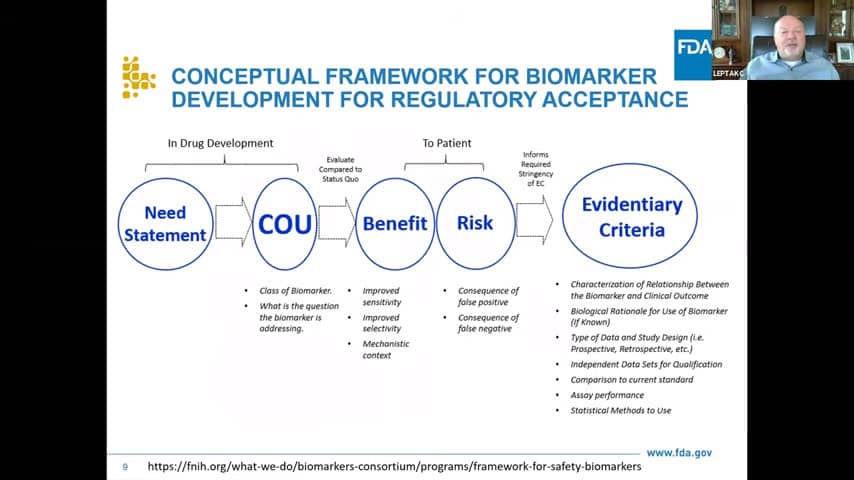 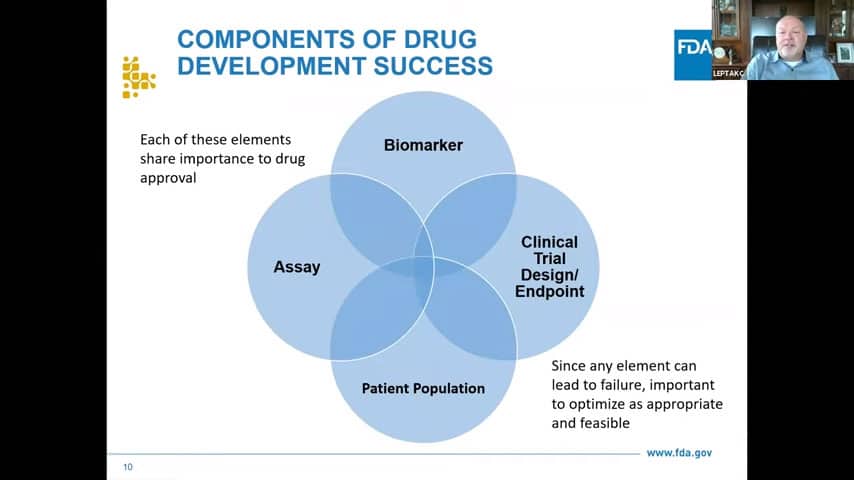 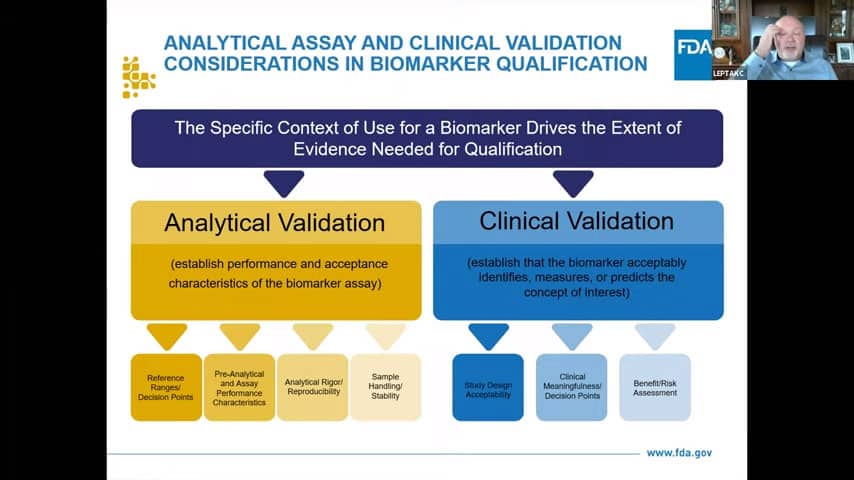 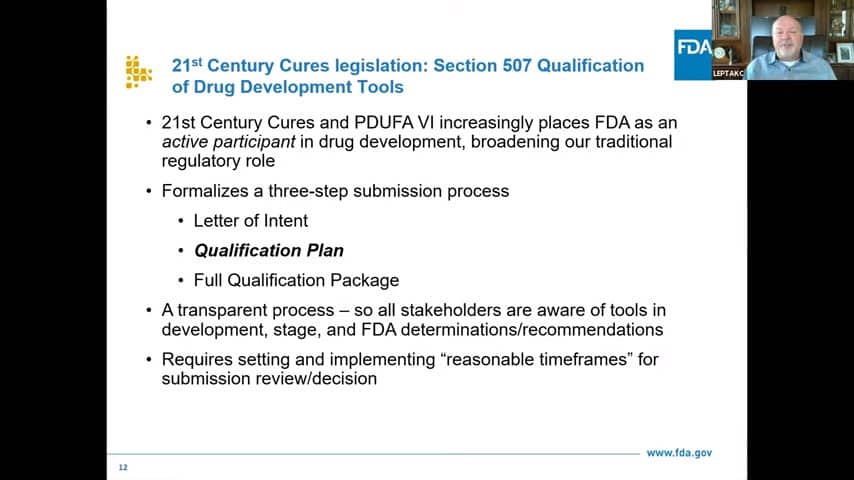 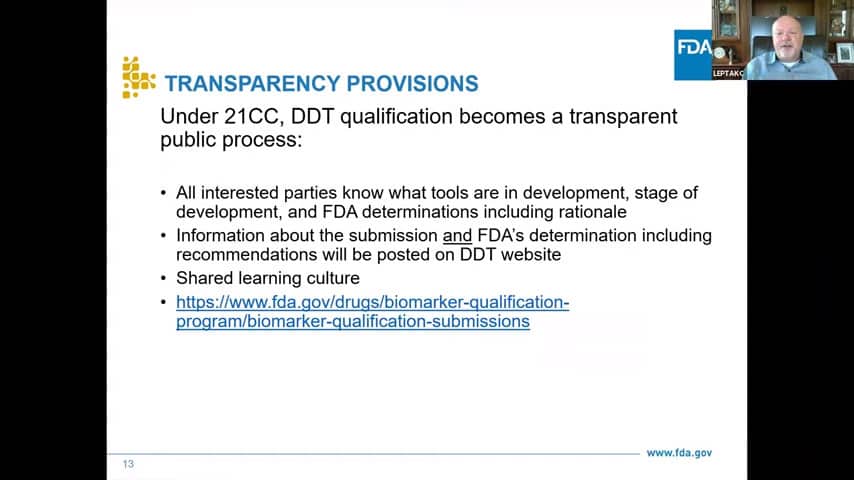 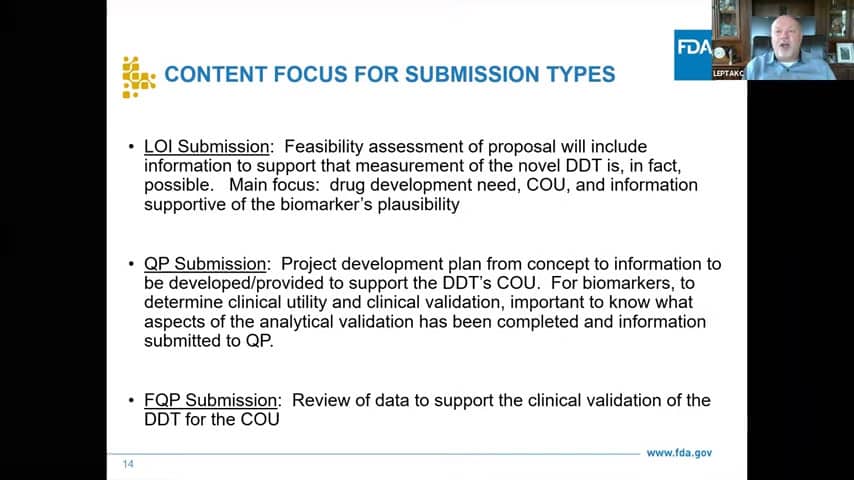 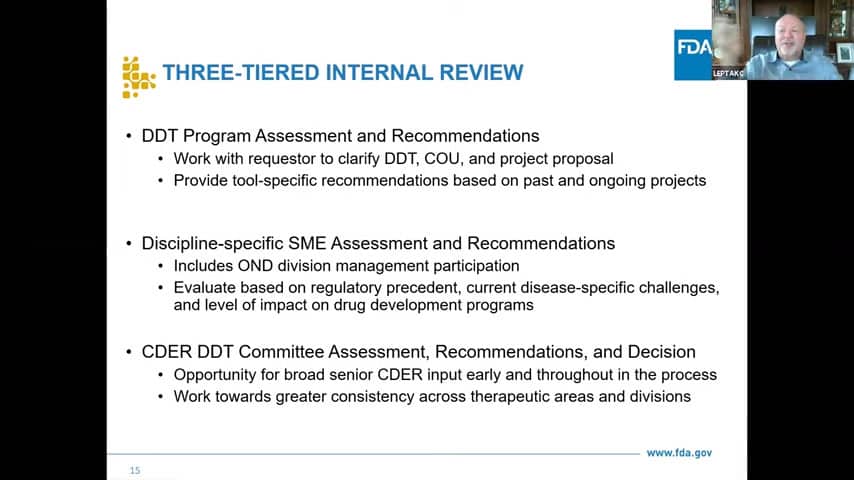 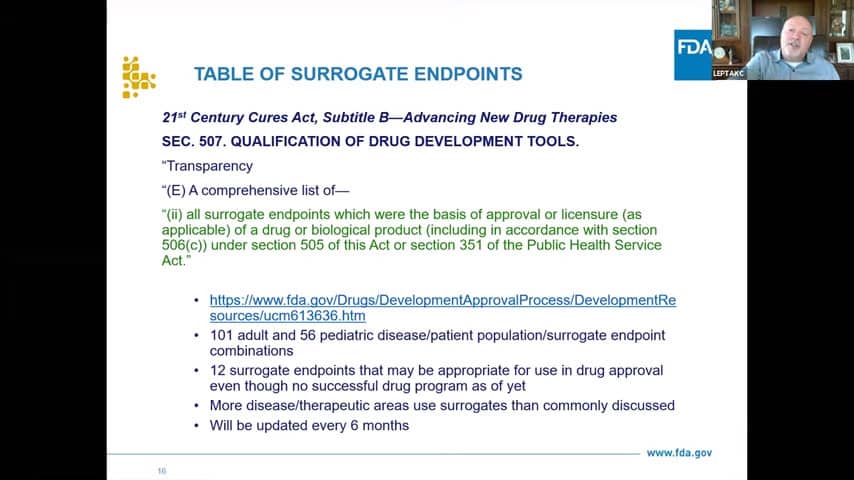 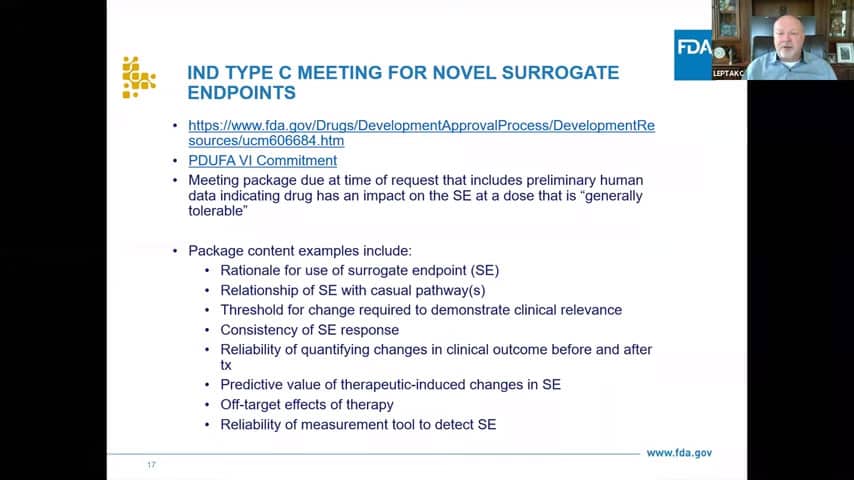 Does the FDA do anything to improve biomarkers not submitted by outside applications? Is there a formal process to improve risk factors? Risk factors are important for balancing arms of clinical trials or doing stratified analysis post-hoc. What is the process by which science and medicine slowly make better versions of those? The example we are interested in this community is age, which is a risk factor for many diseases – this field has already produced a biomarker which is a better predictor for remaining years of life till death (methylation clocks) than chronological age. So it seems intuitive that at some point that should be used as a replacement for chronological age.

How do we get to the model where we use a biological age biomarker as a risk factor stratification model for example as something we balance the arms of a clinical trial with for COVID-19 instead of the number of years since birth?

Does the FDA feel like it has a role of imposing a certain biomarker even if the clinical trial pharma sponsoring doesn’t necessarily have motivation to do that? Maybe it would make their drug look less efficacious if they had those true risk factors measured with best biomarkers available?

What are the considerations/barriers for including a biomarker for X in a trial for Y? For example if there’s a biomarker for osteoarthritis risk factors, could that be included (as secondary or non-endpoint) in a trial where primary endpoint is cardiovascular events (in case one believes the drug could affect both)? Are there any sort of legal limitations there?

So in that case the main selection is probably patient selection, right? You have to have people who have those indications you are targeting and you need to be willing to pay for the measurements.

One interesting question for people in the aging community developing subtractive technologies is that the marker is the driver. So what you’re taking out (pathogenic target) is actually what you measure as a biomarker. So you are using an analytic technology to assess whether the therapeutic is depleting the target. Based on what you talked about today, it kinda looks like we don’t need to engage further in biomarker space other than the raw mechanistic confirmation that the target depletion analytic is accurate.

I assume then we can just forward the validation data from the company doing analytics and that should be enough, right?

A lot of the biomarkers we are having in the aging space are not necessarily the physiology, when we have epigenetic clocks, they might change when we treat aging but that doesn’t mean that they are the mechanism that we targeted. When it comes to aging we have to think a little bit differently then the silos and diseases we grew up with.

In your database of molecule based biomarkers, do you differentiate/record cell bound molecules vs soluble molecules?

Are you seeing an increase in non-invasive imaging-based biomarkers, given progress in this area, especially for the brain (with more and more approaches based on light for example)?

In mouse models we have these miniature laser two photon cameras and the mice can run around, that can be much cheaper than these big MRIs, and they are light based, so you don’t have to penetrate the skull necessarily to get a lot of information. So anything like that yet for humans?

A hypothetical question – imagine you started a company and you want to do something about aging. Right now, because aging is not recognized as a disease, you have to develop a drug against a certain recognized disease. And so you’re facing a kind of chicken and egg question, where you are forced to take these side routes through age-related indications, but they are not getting where they actually want to go. What would be your suggestions?

At what point might it be possible to determine it as a biomarker of aging rather than a biomarker of specific age related disease(s) after you expand it into multiple diseases?

On the subject of imaging-based biomarkers. There are types of data that are very easy to collect, such as facial headshots and recordings of voice, that can be used to create useful biomarkers for age, neurological disorders, etc. Given that this data can be collected trivially (and machine learning can be used to make sure such data collection is normalized easily) – what would it take to have the collection of such data become a mandated collection component of *any* trial – so that this data could always be there to later look at secondary indications like effect on aging.

In that case what’s the right pathway or leverage to push? How can we advocate for it?