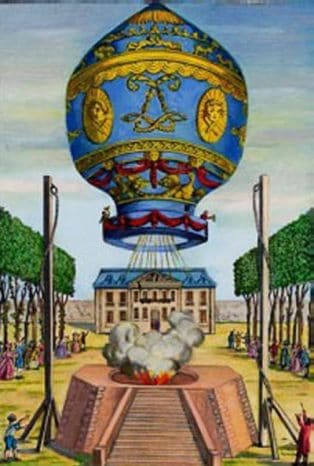 The brothers Montgolfier invented the hot air balloon upon the observation that smoke rises, and thus they figured that if they could catch it in a bag, the bag would be pulled upward.

Hot air ballooning is quite popular today; people think of balloons as being quaint and pretty and natural, or at least more natural than airplanes.

Actually, a modern hot-air balloon uses more fuel than an airplane does to fly the same payload for the same time. The reason, of course, is that hot air needs to be hot, but the balloon needs to be light, so that the material needs to be thin, which means in practice that heat is lost through the balloon, and needs to be regenerated by burning fuel.

With nanotech we could make a fabric of diamond sheets for strength, with vacuum for insulation, and thin metallic films (or graphene sheets) to reflect thermal radiation. That means that we could have a balloon that was much lighter than woven nylon, and yet enormously better insulated.

But if we can insulate it, we could fill it with steam instead (at the same temperature). (Steam would condense on the walls of an uninsulated bag.) Steam at 100C has a density of 0.59, call it 0.6 kg lifting capacity. Since we aren’t losing heat (much), we could superheat it and get some extra lift, say a few 0.1kg/m^3, but there would likely be a tradeoff with insulation weight, energy rates to cover leakage, etc. Even without it, the balloon lifts its own weight, including the water in the steam (and probably 100 times that of just the balloon).

(Postscript: It’s occasionally assumed that diamond is strong enough to make air-buoyant vacuum-filled balloons. This doesn’t actually work. Hydrogen remains the champ, with a density of 0.09 kg/m^3, which is essentially negligible. But even so, a steam balloon would only have to have twice the volume of a hydrogen balloon with the same lift, as compared to 5 times for hot air.)