Everybody knows that the world is running out of oil. The predicted year of the peak varies from 2000 to 2100, but it is generally conceded that it won’t last forever. Of course, economists know that when you have a scarce resource, it doesn’t just suddenly run out: the price rises, more expensive sources or substitutes come into play, and so forth. So it’s unlikely to run out, but rather get more expensive.

I would argue, however, that for most practical purposes peak oil occured in the 1970s.

Consider this graph of worldwide oil production vs population: 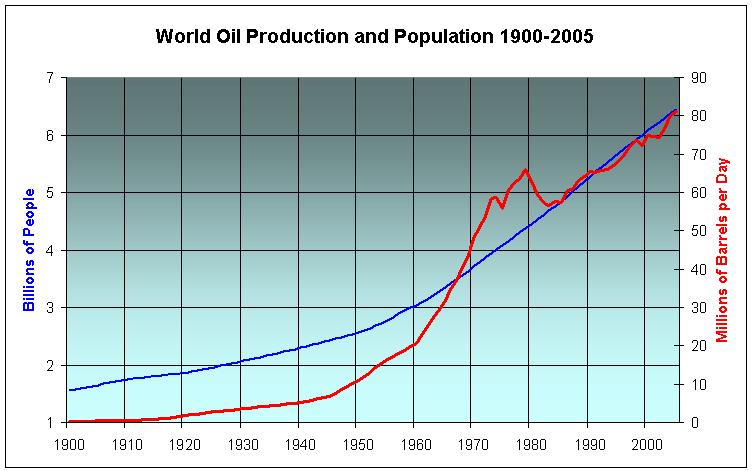 Nanodot readers may remember this post in which I wondered about why people today seem to be so much more pessimistic about the future than people were in 1900. Or indeed, in 1960. This may well be a big part of it: before about 1970, that nice exponential means that energy was not a major constraint to whatever goals you might have had. It had a doubling time of about 10 years, comfortably faster than the economy as a whole. Energy availability was such as to make it increasingly easier, on the average, to do anything you wanted to do.

After 1980 or so, the flatline means that energy is now a straitjacket. The energy input to the average goal in life is getting costlier and costlier, making all of life harder and harder. (This is true whether you are simply paying more, or expending effort to make your energy use more efficient, effort you could have used for your goals.)

So: in terms of the energy we want, what would it really mean to have sustainable energy? Here’s my definition: A sustainable energy source must allow for a growth rate in energy use that is enough higher than the economy as a whole so that it acts as an enabler rather than a brake. In other words, it needs to be like oil was before 1970, and the future was a place we were happy to be going to.

Oil today isn’t sustainable; coal isn’t, biofuels are an environmental disaster, and so is ground-based solar. The current world energy use rate is about 15 terawatts. This is about one doubling from 1970; we should have had 4 (i.e. and be using 120 TW now).

To see just how poorly the so-called renewable forms of energy stack up against the standards of a truly sustainable source, consider solar. At 100 watts/square meter (averaged over nights, clouds, latitude, and so forth), 120 TW would require a square of land over 1000 kilometers on a side — and you’d have to double it every decade. By the end of the century you’re using the entire Earth as a solar collector, even with improved conversion efficiency.

Real sustainability requires a path to exponential growth. No energy source that requires a fixed amount of the Earth’s surface per kilowatt is sustainable.

On the other hand, space-based solar doesn’t have those problems. To begin with, there’s 10 billion times the sunlight currently going to waste as strikes the Earth. And it would be good to have as much of the processes consuming the power be off the Earth, as possible. Availability of crude oil isn’t the only bottleneck — you don’t want to dump too much CO2 or just plain heat into the biosphere.

Energy isn’t scarce. To a close approximation, all the matter we can see in the universe is part of fusion reactors. All we have to do is step out and get it.

In the1970s, the days when Jimmy Carter was creating the Department of Energy and energy per capita was flatlining, one used to hear a lot of well-meaning but clueless people decry the space program and say how we should pay attention to the problems we had right here. But most of the problems we have here, have to do with poverty (and that includes overpopulation — rich people have fewer children). Poverty is ameliorated by cheap energy.

Oil isn’t free energy handed down from heaven. It took all of human technological development up till about a century and a half ago to be able to use it. There are plenty of other forms of energy just as plentiful — excuse me, more plentiful by factors of billions — and more beyond that. It only takes developing the technology to harvest it.