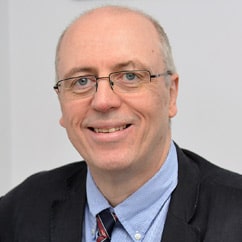 David Leigh is a scientist who designs and synthesises artificial molecular motors and machines from first principles. He has made a number of notable contributions to the field, including the use of light-sensitive molecules to make small droplets of liquid move uphill. David also developed a tiny molecular machine that mirrors the function of the ribosome, the protein factory of our cells.

His pioneering work has significantly improved the future of nanotechnology, opening up a world of possibilities for the development of new materials. These include different types of plastics, novel types of catalysts and pharmaceuticals, for example.

David has received a number of major international awards for his research, including the 2007 Izatt–Christensen Award for Macrocyclic Chemistry, the 2007 EU Descartes Prize and the 2007 Feynman Prize for Nanotechnology. He has also received seven Royal Society of Chemistry awards.