Earlier this year we cited further progress on molecular machines, in this case transporting cargo, from the group of Professor David A Leigh FRS FRSE MAE and winner of the 2007 Feynman Prize in Nanotechnology, Theoretical category. Further molecular machine progress was recently reported by Belle Dumé at nanotechweb.org “Chemically powered nanomotor goes autonomous“:

Researchers at the University of Manchester, UK have made the first autonomous chemically powered synthetic small-molecule motor. The new device, which is very much like the protein motors found in biological cells, might be used to design artificial molecular machines similar to those found in nature. Such machines could be important for applications such as synthetic muscles, nano- and micro-robots and advanced mechanical motors.

Molecular machines are ubiquitous in nature and are at the heart of nearly every biological process. They have evolved over billions of years to exploit energy from sunlight or complex chemical reactions in the body, and are made up of complicated assemblies of proteins responsible for a host of processes in living organisms, such as ion transport, ATP synthesis and cell division.

“Our synthetic molecular motor works in a manner reminiscent of motor proteins, in which motion is powered by the protein catalyzing the hydrolysis of ATP,” explains team leader David Leigh. “Our molecular motor also runs using a chemical fuel, Fmoc-Cl, and it derives its energy by catalytically decomposing the fuel to dibenzofulvene and CO2.” …

The article continues by explaining that previous chemically-fueled molecular motors required several fuel molecules to be continuously fed in different steps, while this new motor, once it is given the fuel molecule, moves continuously around a molecular track until the fuel is exhausted. The article quotes Leigh explaining that the motor works as an ‘information ratchet’ in compliance with the second law of thermodynamics, and that this initial version is very inefficient but that he expects incremental improvements to lead to applications like transporting building blocks for molecular construction. The motors might also be used as power packs for molecular muscles, nanoscale robotics and molecular factories, to name but a few.

Also quoted is Fraser Stoddart of Northwestern University, winner of the 2007 Feynman Prize in Nanotechnology, Experimental category who was not involved in this work. He described this advance as an important proof-of-principle in a burgeoning field of scientific endeavour that is intellectually challenging and experimentally demanding in the extreme. Another key milestone on the long road to applications in molecular nanotechnology has been reached. 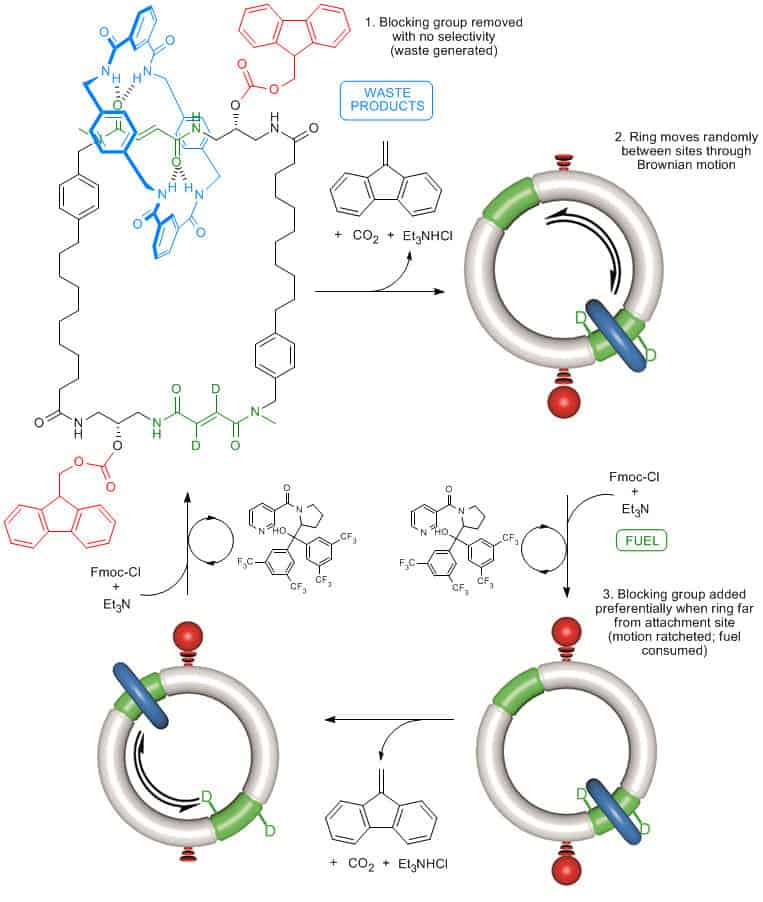 Addition of Fmoc-Cl causes the blue ring to continuously rotate in a clockwise direction around the cyclic track. The Fmoc-Cl is activated by the bulky pyridine catalyst and reacts with any free OH groups on the track to form the Fmoc carbonate. Contemporaneously Fmoc groups are slowly cleaved from the track by Et3N. The rate of addition of the Fmoc groups depends on the position of the ring on the track, whereas the rate of cleavage does not. This biases the direction of Brownian motion of the blue ring causing directional rotation of the motor components. Image credit: Leigh group, University of Manchester

The operation of this molecular motor is diagrammed and described on the Leigh Group web site “Cracking Nanomotor, Gromit!“:

Designing molecular motors is rarely an intuitive process because behaviour at the molecular level is often very different to what we observe in our ‘big’ world. … In the mechanical machines we are familiar with the parts (cogs, flywheels, pistons etc) do not move unless and until a force is applied to make them do so. At the molecular scale, however, molecules and their parts are constantly moving through Brownian motion and it is finding ways to control the directionality of that motion that is the key to developing working nanomachines. Now, scientists at the University of Manchester have invented a synthetic molecular motor that runs off chemical energy in a similar manner to the way that motor proteins use ATP (adenosine triphosphate) as a fuel …] In the man-made nanomotor, a synthetic molecular ring moves directionally around a molecular track powered by the motor’s catalysis of chemical reactions of a fuel. Remarkably, the motor mechanism depends on information transfer about the position of the ring to the track: when the ring is at the top of the track consumption of the fuel causes the motor to allow the ring to move faster to the right than to the left; when the ring is at the bottom of the track the motor allows the ring to move faster to the left than to the right. The net result is that the ring moves clockwise around the track as long as there is chemical fuel left for the motor to consume, just as a train can travel along a railway track until the diesel for its engine runs out.

The use of information transfer between molecular components to achieve directional motion in the motor mechanism is reminiscent of the Maxwell’s Demon thought experiment (although it requires more energy to be put in than is released and so does not challenge the Second Law of Thermodynamics!), a process that the Leigh group have previously used … to drive molecular systems away from equilibrium using light …

Continuing progress with molecular motors provides reason to be optimistic about the eventual development of atomically precise manufacturing and molecular robotics. We will eagerly await the next step forward.
—James Lewis, PhD

About the Author: Jim Lewis