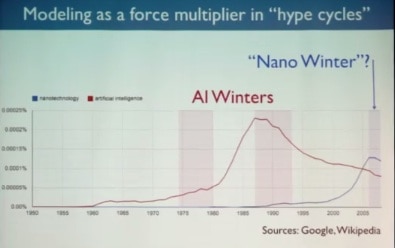 A select set of videos from the 2013 Foresight Technical Conference: Illuminating Atomic Precision, held January 11-13, 2013 in Palo Alto, have been made available on vimeo. Videos have been posted of those presentations for which the speakers have consented. Other presentations contained confidential information and will not be posted.

The first speaker at the Computation and Molecular Nanotechnolgies session, Alex Wissner-Gross, presented “Bringing Computational Programmability to Nanostructured Surfaces” as an effort to close the feedback loop between bits and atoms. https://vimeo.com/62119585 – video length 6:31. Dr. Wissner-Gross observed that, looking at the past few decades, the progress on the “bits” side of technology has been unrelenting, and that it is incumbent upon nanotechnologists to make sure that the atoms side of the story is equally compelling. Looking at the progress of civilization over the past several millennia, Dr. Wissner-Gross argued that all of the progress has been defined by our ability to increasingly, finely, and programmably tune the properties of matter in our physical world. Taken to its logical completion, one could say the ultimate form of universal programmability is the substrate for computation. He proposed that exploring the interplay between programmable atoms and programmable bits will ultimately define the critical path toward some of the most interesting technologies likely to appear over the next few decades.

One way of approaching this is to look at a brief history of time. Starting with some natural examples of programmable matter, like ribozymes, ribosomes, polyketides, and immune systems. Starting in the 15th century, artificial forms of programmable matter blend the interface between bits and matter, starting with moveable type, phonographs, universal Turing machines, and transistors. One additional very important development is the transmission of the first Internet packet, which was arguably the official decoupling of bits from atoms. Dr. Wissner-Gross then asked, how do we start to re-couple bits and atoms now that bits have made so much progress? How can we help atoms to catch up?

He presented four examples—initially speculative, but many of the forecasts in these examples have come to pass in the years since—for starting to recouple bits with atoms: how to re-couple computation with nanotechnology, whether it is with assemblers (Engines of Creation 1987) matter compilers (Nanosystems 1992) quantum dot surfaces (Hacking Matter 2004) or digital fabrication (2005, image on slide unclear).

Dr. Wissner-Gross also sounded a cautionary note. Looking at public interest in nanotechnology vs. public interest in artificial intelligence over the years, measured a word fractions of books. Although this story is very incomplete, he suggested it might be worth thinking about whether nanotechnology might be in something of a “nano winter” right now, comparable to the “AI Winters” when interested in artificial intelligence and funding for artificial intelligence started to fall. Arguably, with continued funding for the National Nanotechnology Initiative, nanotechnology is not in exactly the same position as AI was because there is quite a bit of public funding for nanotechnology research. However, it is, he proposed, worth considering that many of the most interesting technological forecasts for nanotechnology have started to retreat from the public consciousness. Thinking about what helped AI out of its winters, he argued, that the answer was probably modeling. The early focus on symbolic AI versus the later focus on statistical AI provides some useful blueprints on how to keep the energy and the public interest in nanotechnology going. He argued the solution is an increased focus on modeling. Modeling in the early days of a revolution doesn’t get as much respect as it deserves. In the later stages of the nanotech revolution we start to see systems of sufficient levels of complexity that modeling is truly essential for building complex architectures. Dr. Wissner-Gross’s take-home message is that modeling is going to be “incredibly essential” to complete some of the most complex architectures and the most complex visions that were laid out to inspire molecular nanotechnology in the first place.
—James Lewis, PhD