It’s appropriate on this July 7 to make at least a reference to the history of ideas that lies behind the Feynman Path. That’s because July 7 is the (102nd) birthday of Robert A Heinlein, the famous SF writer, futurist, and inventor. His invention of interest is the “Waldo F. Jones Synchronous Reduplicating Pantograph” from the story Waldo. Heinlein is recognized as the conceptual inventor of the telemanipulator, often called a Waldo for that reason, but it is not as widely remembered that the original Waldoes in the story were (a) self-replicating (“Reduplicating”) and (b) scale-shifting (“Pantograph”): 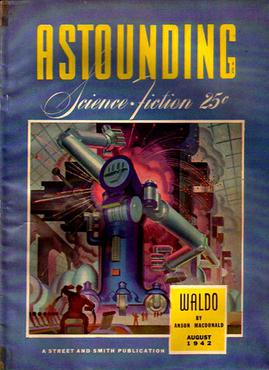 By the way, contra the widespread impression that Heinlein was a hidebound conservative, note that the plot of Waldo is about a big corporation which steals Waldo’s patent and establishes a monopoly on transmitted power in a way that causes a widespread health problem, and how Waldo fights the monopoly and cures the health problem. Indeed his construction of a series of ever-smaller waldoes is with the goal of being able to operate on individual nerve cells.

… Neither electromagnetic instruments nor neural surgery was refined enough to do accurate work on the levels he wished to investigate.
But he had waldoes.
The smallest waldoes he had used up to this time were approximately half an inch across their palms–with micro scanners to match, of course. They were much too gross for his purpose. …
He used the waldoes to create tinier ones. …
His final team of waldoes used for nerve and brain surgery varied in succeeding stages from mechanical hands nearly life size down to these fairy digits which could manipulate things much too small for the eye to see. They were mounted in bank to work in the same locus. Waldo controlled them all from the same primaries; he could switch from one size to another without removing his gauntlets. The same change in circuits which brought another size of waldoes under control automatically accomplished the change in sweep of scanning to increase or decrease the magnification so that Waldo always saw before him in his stereo reciever a “life-size” image of his other hands.

Note that Heinlein even addresses, in an offhand science-fiction kind of way, the problem of seeing what you are doing at smaller scales. But that’s all. It’s an idea, not a detailed plan of any kind.
But it seems very likely that Feynman would have read Waldo or known about it. In the period between 1942 (Waldo) and 1959 (Plenty of Room), telemanipulators were built, used in the nuclear industry as Feynman mentions in his talk, and widely referred to as waldoes.
(H/t to Perry Metzger.)