There hasn’t been a lot of work on self-replicating workcells. There’s been plenty on robotic workcells that don’t replicate, but almost all of this falls into the “more complex than what it makes” category. The basic idea goes back to Waldo: imitate a machine shop and the person servicing the machines / assembling the parts.

It seems clear that a major step toward the Feynman Path would be to work out a scalable architecture for a workable KSRM that actually closed the circle all the way. A reasonable start would be a deposition-based fab machine, a multi-axis mill for surface tolerance inprovement, and a pair of waldoes. See how close you could get to replication with that, and iterate.

I used the idea of a general-purpose manipulation robot in my Architectural Considerations for Self-replicating Manufacturing Systems paper: 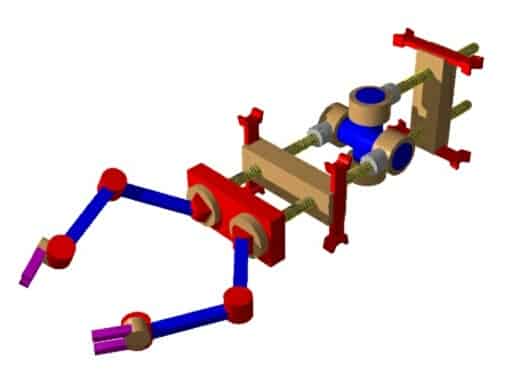 but this probably more complex than would be needed for the Feynman Path. The difference is that the system in the paper was geared for producing significant amounts of product as well as reproducing/extending itself. We could probably get away with just a pair of arms on a rotating base with access to a few machines and a workbench (for assembling more machines).

A Feynman Path workcell actually avoids the problem that a standard solid-freeform-fab (SFF) design has with building something its own size, because it’s building a copy that’s smaller than itself! Even so, it will have to have general manipulation capability — and the target system, at the nanoscale, will have to build more copies at its own size, so we can’t go with just a simple SFF design.

Even so, SFF is the key to giving the replicating system a manageably small size. It’s the main technology that wasn’t here in Heinlein’s and Feynman’s day.

The key to using SFF in a scaling sequence is to understand what kinds of depositions could be done at different stages. One of the most straightforward at the macroscale is melting the substance of interest and allowing it to cool as you deposit essentially drop by drop on the workpiece. This works for materials ranging from wax to titanium. Scaling works both for and against us here — the super-fast dissipation of heat at smaller scales means you have greater control in time, but less in space, of what melts.

At smaller scales, electrodeposition (and electro-removal, as in EDM) will likely have to be used. At the smallest scales, the processes used in electroplating, but controlled at the near-atomic scale, are good candidates.

A particularly important aspect of the Feynman Path is that not much more than halfway down to molecular scale in part size, we already hit atomic scale in tolerance. That’s within a generation or two from our likely starting point at 1/1000 scale. A micron-sized part really needs atomic-scale tolerance to be considered high-precision. Thus much of the work in that size range will be aimed at surface forming or re-forming. Even so, there will be a pressure to design machine elements where bearing surfaces are flat (as in a thrust beating or slider) so they can follow crystal planes, until such time as it becomes possible to construct strained-shell circular bearings (simple example: MWCNTs aka nested buckytubes).

Both the motors themselves, and the distribution of power and control to them, will require the SFF to be able to lay conductive paths in non-conductive structure. Given that the motors will be being fabbed in place, it will be easy to integrate high-ratio reducers into them for extremely fine angular control: 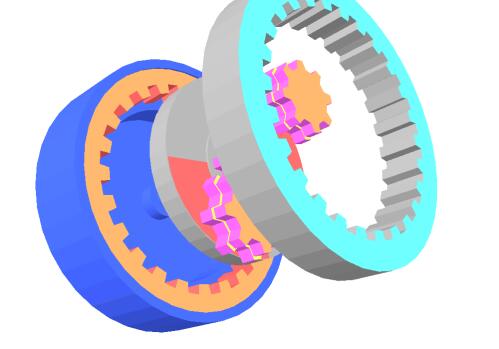 and build them directly into the manipulator arms and the leadscrews of the SFF and finishing machine(s).