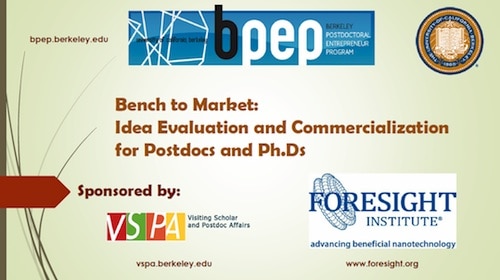 Progress in biotechnology has played an important role in progress in nanotechnology since Eric Drexler proposed in 1981 protein design as a pathway to develop general capabilities for molecular manipulation and, eventually, molecular manufacturing. The second Feynman Prize in nanotechnology was awarded in 1995 for pioneering work in building atomically precise 3-D objects from DNA. The use of large scaffolds buit with DNA origami and other biomimetic polymers played a central role in the 2007 Technology Roadmap for Productive Nanosystems. Since the beginning of this blog, progress in structural DNA nanotechnology and protein design have been frequent topics for posts.

Biotechnology and nanotechnology are increasingly playing synergistic roles in opening new opportunities for near-term medical advances, as we try to indicate here with posts on Future Medicine and Nanomedicine. A crucial factor in obtaining the benefits of these research advances is how quickly and efficiently discoveries can move from the laboratory bench to the market. Whether the technology is biotechnology, nanotechnology, or the interface of the two, the basic issues of founding and funding a startup are probably not all that different. And what better place to explore those issues than Foresight’s location in the heart of Silicon Valley! Accordingly Foresight was happy to co-sponsor an event last month hosted by the Berkeley Postdoc Entrepreneur Program “Bench to Market: Idea Evaluation and Commercialization for Product-market Fit“.

The speaker Dr. David Kirn, Co-Founder, President & CEO; Co-Chairman of 4D Molecular Therapeutics and his co-panelists shared the lessons learned in their biotech and nanotech ventures with the aspiring entrepreneurs in attendance. Commercial success for their efforts collectively and individually could lead not only to near-term clinical advances, but also to further improvements in the molecular toolkits needed for advanced nanotechnology leading to atomically precise manufacturing.
—James Lewis, PhD