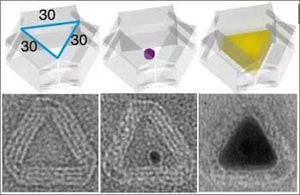 By creating molds from stiff DNA, researchers were able to cast gold 'seeds' into complex metal nanoparticles. From left to right, this 3D polygonal particle was formed by designing a DNA mold, planting a gold seed, then chemically forcing the seed to expand until complete formation. Credit: Harvard's Wyss Institute

The great advantage of DNA nanotechnology is that the unique molecular recognition code of DNA bases provides a way to build complex structures with atomically precise addressability. At least as long ago as 2003 DNA nanotechnology pioneer Nadrian C. Seeman proposed using DNA nanotechnology to construct a “molecular pegboard” to organize nanoscale components into functional arrays. Initial progress toward that goal was reported in 2005 “Self-Assembling a Molecular Pegboard” [abstract; full text, courtesy of authors]. Two months ago we pointed to improvements in the scaffolded DNA origami approach that provided a “10-fold larger breadboard and 350-fold lower DNA synthesis costs”. Over the years we have cited other work in which addressable DNA scaffolds have been used to organize functional components. Such achievements have been used to precisely spatially organize small numbers of larger, atomically complex, nanoscale objects. Recently researchers have asked whether atomically precise DNA molds can be used to cast large numbers of inorganic atoms into predetermined complex (but not atomically precise) 3D nanoparticles that can be arranged in space to form larger, more complex nanoscale objects. A hat tip to ScienceDaily for reprinting this news release from the Wyss Institute for Biologically Inspired Engineering at Harvard “DNA nano-foundries cast custom-shaped metal nanoparticles“:

The ability to mold inorganic nanoparticles out of materials such as gold and silver in precisely designed 3D shapes is a significant breakthrough that has the potential to advance laser technology, microscopy, solar cells, electronics, environmental testing, disease detection and more.

The Wyss team’s findings, described in a paper titled “Casting Inorganic Structures with DNA Molds,” were published … in Science [abstract]. The work was done in collaboration with MIT’s Laboratory for Computational Biology and Biophysics, led by Mark Bathe, senior co–author of the paper.

“The paper’s findings describe a significant advance in DNA nanotechnology as well as in inorganic nanoparticle synthesis,” Yin said. For the very first time, a general strategy to manufacture inorganic nanoparticles with user-specified 3D shapes has been achieved to produce particles as small as 25 nanometers or less, with remarkable precision (less than 5 nanometers). A sheet of paper is approximately 100,000 nanometers thick.

The 3D inorganic nanoparticles are first conceived and meticulously planned using computer design software. Using the software, the researchers design three–dimensional “frameworks” of the desired size and shape built from linear DNA sequences, which attract and bind to one another in a predictable manner.

“Over the years, scientists have been very successful at making complex 3D shapes from DNA using diverse strategies,” said Wei Sun, a postdoctoral scholar in the Wyss’ Molecular Systems Lab and the lead author of the paper. For example, in 2012, the Wyss team revealed how computer-aided design could be used to construct hundreds of different self–assembling one–, two–, and three–dimensional DNA nanoshapes with perfect accuracy. It is this ability to design arbitrary nanostructures using DNA manipulation that inspired the Wyss team to envision using these DNA structures as practical foundries, or “molds”, for inorganic substances.

“The challenge was to translate this kind of 3D geometrical control into the ability to cast structures in other diverse and functionally–relevant materials, such as gold and silver,” Sun said.

Just as any expanding material can be shaped inside a mold to take on a defined 3D form, the Wyss team set out to grow inorganic particles within the confined hollow spaces of stiff DNA nanostructures.

The concept can be likened to the Japanese method of growing watermelons in glass cubes. By nurturing watermelon seeds to maturity inside cube–shaped glass boxes, Japanese farmers create cube-shaped mature melons that allow for densely–packed shipping and storage of the fruit.

The Wyss researchers similarly planted a miniscule gold “seed” inside the hollow cavity of their carefully designed cube–shaped DNA mold and then stimulated it to grow. Using an activating chemical solution, the gold seed grew and expanded to fill all existing space within the DNA framework, resulting in a cuboid nanoparticle with the same dimensions as its mold, with the length, width and height of the particle able to be controlled independently.

Given their unthinkably small size, it may come as a surprise that stiff DNA molds are proportionally quite robust and strong, able to withstand the pressures of expanding inorganic materials. Although the team selected gold seedlings to cast their nanoparticles, there is a wide range of inorganic nanoparticles that can be forcibly shaped through this process of DNA nanocasting.

A very useful property is that once cast, these nanoparticles can retain the framework of the DNA mold as an outer coating, enabling additional surface modification with impressive nanoscale precision. These coatings can also help scientists develop highly-sensitive, multiplex methods of detecting early–stage cancers and genetic diseases by combining the chemical specificity of the DNA with the signal readout of the metal. For particles that would better serve their purpose by being as electrically conducive as possible, such as in very small nanocomputers and electronic circuitry, the DNA framework coating is quickly and easily broken down and removed to produce pure metal wires and connectors.

“The properties of DNA that allow it to self assemble and encode the building blocks of life have been harnessed, re–purposed and re–imagined for the nano–manufacturing of inorganic materials,” said Don Ingber, Wyss Institute founding director. “This capability should open up entirely new strategies for fields ranging from computer miniaturization to energy and pathogen detection.”

The brief description in the news release does not do justice to the technical mastery represented by this work. First, it should be pointed out that the nanoparticles produced are not cast to atomic precision even though they are cast using atomically precise molds. A precision of less than 3 nm for 25-nm-scale parts translates to a variation of the volume of individual nanoparticles of a couple thousand cubic nanometers, which corresponds to variations of several tens of thousands of silver atoms. Nevertheless, transmission electron microscopy confirmed the absence of grain boundaries within the nanoparticles, implying single crystal growth of the silver nanoparticles. Although lacking atomic precision, the control of nanoparticle shape and size is sufficient to permit design of particles with desired plasmonic properties, opening application to sensing, photonics, and nanoelectronics.

Among the impressive accomplishments described in the Science paper, the software used to design the molds handles the trade-off between making the mold walls thick enough and stiff enough (two or three DNA double helices thick) to constrain nanoparticle growth and shape, while providing an internal cavity sufficient for the size of the desired nanoparticle. The simulated mechanical properties of the DNA mold were comparable to those of viral capsids. First an open-ended barrel and two lids constructed from DNA origami are designed for the desired stiffness. A 5-nm gold nanoparticle is anchored to a specific spot on the inside of the barrel via a DNA handle complementary to one of several dozen DNA strands on the inside of the barrel. The two lids are attached to the barrel via sets of complementary DNA strands. Under suitable chemical conditions, the 5-nm gold nanoparticle grows under the confines of the mold into a larger silver nanoparticle shaped by the mold. Gold was chosen for the seed because of its stability and nucleation versatility. The 0.5-nm gap between DNA helices allows the diffusion of small ions and molecules into the molds. Growth was triggered by the addition of AgNO3 and ascorbic acid, precipitating metallic Ag around the Au seed. Nanoparticles were examined by transmission electron microscopy. Nanoparticle cuboids were consistent with designed cavity parameters of 21 nm x 16 nm x 30 nm. However, due to dehydration and deformation during preparation for electron microscopy, small deviations of 2 to 3 nm were observed for some nanoparticles. All of the DNA cuboids exhibited rounded rather than sharp corners. Nanoparticle growth was only observed within the molds, confirming the necessity of seed nucleation. In some experiments, one of the DNA lids was omitted, leading to growth of some nanoparticles out of the barrels, to much larger dimensions.

In other experiments Ag NPs were cast (using only open barrels) with differently shaped cross sections—equilateral triangle, right triangle, and circle—but without height control. In still other experiments, the addressability of the outside surface of the molds was used to assemble quantum dots at assigned locations on selected faces of a nonspherical metal nanoparticle. It seems likely that this additional level of control of functional nanostructures provided by the ability to construct atomically precise molds will be a boon to various applications in the near to middle term. Whether or not it will also prove useful in the long term development of high throughput atomically precise manufacturing remains to be seen.
—James Lewis, PhD