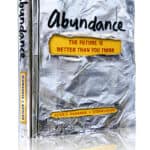 A couple months ago we noted that Abundance, by Foresight Advisor Peter Diamandis and science writer Steven Kotler hit #1 on both Amazon and BarnesAndNoble. On Wednesday, April 11, Singularity University will present a live webcast with co-founder and chairman Peter H. Diamandis on Abundance:

Diamandis will present the case that the world is getting better at an accelerating rate through the convergence of four powerful forces: the exponential advancement of technology, DIY (Do It Yourself) innovators, Techno-philanthropists, and the Rising Billion, which, acting together, will create abundance in the areas of clean water, nutritious food, affordable housing, personalized education, top-tier global health care, and ubiquitous energy – helping to solve humanity’s biggest challenges.

The Wall Street Journal called Abundance “a manifesto for the future that is grounded in practical solutions.” The Economist Magazine said it was “a godsend for those who suffer from Armageddon fatigue!” Sir Richard Branson said: “Abundance provides proof that the proper combination of technology, people and capital can meet any grand challenge.”

Peter Diamandis co-founded Singularity University with Ray Kurzweil in 2008, and currently serves as its Chairman and a member of the Faculty. He is also Founder and Chairman of the X PRIZE Foundation, which leads the world in designing and launching large incentive prizes to drive radical breakthroughs in the areas of exploration, energy and environment, education, global development and life sciences. Diamandis is a leading speaker on innovation, counseling senior business leaders how to utilize exponential technologies and incentivized innovation to dramatically accelerate their business and career objectives. Dr. Diamandis earned a BS in molecular genetics and aerospace engineering from MIT, and an MD from Harvard Medical School. He is also known for “Peter’s Laws,” including “The best way to predict the future is to create it yourself!”

Webcast participation requires registration. Questions can be submitted in advance or during the webcast via Twitter (#whichwaynext).
—James Lewis, PhD