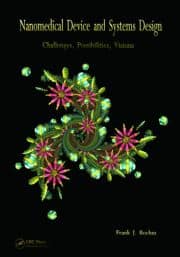 Aubrey de Grey (Chairman and Chief Science Officer of the Methuselah Foundation and Editor-in-Chief of the high-impact journal Rejuvenation Research) offers some affirmative comments below, subsequent to a review of the upcoming book: Nanomedical Device and Systems Design: Challenges, Possibilities, Visions (CRC Press/Taylor & Francis)
http://www.crcpress.com/product/isbn/9780849374982
edited by Frank J. Boehm, which is slated for release on November 25, 2013.

“This book is extraordinarily detailed and comprehensive, and succeeds splendidly as an update to a field previously defined by Freitas’s similarly encyclopedic works. A particularly strong element is the thorough dissection of methods of nanodevice delivery covered in the first section. I am most impressed by the book’s structure. One particularly nice decision was to open up the central section to invited authors, giving the book a level of variety that is otherwise challenging to deliver. The level of detail presented is the main thing I am looking for in such highly speculative engineering design surveys, and it is fantastic here.”

“Robert Freitas defined the field of nanomedicine with his encyclopedic analysis published at the turn of the century. After 15 years, the time is right to provide an updated view, but can Freitas’s comprehensiveness ever be matched? Boehm has shown that it can. As Freitas did, he has risen to the formidable challenge of tackling a hugely speculative area of pioneering technology with a level of thoroughness that should give even the cautious reader a substantial level of confidence that, once the most basic nuts and bolts of molecular manufacturing are available (and progress towards them is already encouraging), their application to some of our greatest needs may rapidly follow.”

Upon his review of the book, Ted Kucklick, author of The Medical Device R&D Handbook, notes that “Nanomedical Device and Systems Design: Challenges, Possibilities, Visions speculates where nanotechnology for medicine might develop in the next 10-20 years, and postulates a number of possibilities for therapeutic applications including artificial blood and neuroprosthetics and posthuman augmentation. Medical futurists may find this book useful in anticipating where these technologies may lead.”

Frank Boehm (Thunder Bay, ON, Canada) has been involved with nanotechnology and especially nanomedicine since ~1996, and has incorporated a nanomedical startup called NanoApps Medical, Inc. with the aim of developing advanced nanomedical diagnostic and therapeutic devices and systems. Frank describes his book (an effort that spanned eight years) in an interview with Future Medicine:

This text endeavors to explore a significant range of conceptual nanomedical components, devices and systems, as well as to present some of the latest real world laboratory-based research, which may lead to the development of advanced and highly efficacious nanomedical technologies. This volume is trisegmented; the initial segment utilizes an envisaged conceptual exemplar nanodevice and system (Vascular Cartographic Scanning Nanodevice – VCSN), which explores various potential design considerations, which might enable specific functionalities of sophisticated autonomous nanomedical devices. The second segment is comprised of chapters that have been contributed by world class experts in the field, who present and articulate pioneering laboratory-based nanomedical research. The final segment investigates more highly conceptual nanomedical possibilities and visions relating to the implementation of advanced nanomedicine in remote regions and the developing world, as well as nanomedicine in space applications, human augmentation and longevity.

One of my primary motivations for writing this book is to inspire, promote and hopefully expedite the development and implementation of beneficial advanced nanomedical diagnostic and therapeutic devices and systems, which have strong potential to enable positive paradigm shifts in the field of medicine. In addition, to present conceptual and laboratory derived examples of how sophisticated, highly efficient, minimally invasive and cost-effective nanomedical diagnostic and therapeutic strategies might facilitate significantly increased accessibility to advanced medical procedures to assist those in both the developing and developed worlds. Nanomedical diagnostics and therapeutics operate at cellular and molecular levels, precisely where many disease processes find their genesis, and from which they emanate. Hence, nanomedicine has the potential for diagnosing and treating many conditions preemptively, before they have the opportunity to proliferate. Since sophisticated nanomedical devices and systems will be designed and engineered to operate within cellular, organellar, molecular and (hypothetically) atomic domains, it is conceivable that they will be imbued with capacities for the highly accurate diagnoses and meticulous and thorough eradication of virtually any disease state, pathogenic or toxic threat.

Further, in the light of the likely inevitable advent of advanced molecular manufacturing, elegant and economical nanomedical technologies might be readily accessible to those in developing, as well as developed regions. Concomitantly, practically every type of invasive surgical procedure could be rendered obsolete, as all corrective activities may be conducted in vivo by interactive multitudes of nanomedical cell repair devices, under the direct control of “outbody” human surgeons and dedicated computers. Innumerable options for human cognitive and physiological augmentation, as well as the potential slowing, prevention or possible (to a degree) reversal of the disease of ageing may become reality. In conjunction with the option for significantly increased lifespans, those who are driven to explore the stars may undergo specialized nanomedical enhancements to enable robust protective countermeasures against the degradative effects of microgravity and deep space radiation, and to facilitate, if required, prolonged suspended animation.

Frank has recently contributed an article to Robotics Business Review entitled “Nano-medical Robotics: Non-Invasive Surgery and Cell Repair” where he states that: “It seems very likely that the practice of medicine is poised to undergo myriad significant changes in the coming 10 to 30 years. Of critical importance and responsibility to the robotics community, as relates to the prospective future development of advanced autonomous nano-medical robotic devices and their infrastructures, will be the leading and guiding of their safe development and efficacious functionality, via the implementation of stringent testing and operational protocols, in conjunction with the integration of highly redundant systems to ensure overall optimal integrity.”

Nanomedical Device and Systems Design: Challenges, Possibilities, Visions is also being featured on, among other sites:
Nanowerk
NANOmagazine (UK)
Institute of Nanotehnology (UK)