“It was a true solar-plexus blow, and completely knocked out, Perkins staggered back against the instrument-board. His outflung arm pushed the power-lever out to its last notch, throwing full current through the bar, which was pointed straight up as it had been when they made their landing.”

My current research in AI, such as it is, is an attempt to build a system that’s capable of understanding the above quote. It’s from the middle of a book, and it is much much harder to understand, fully, than you might think. What I intend to do here is to unravel the process by which someone reading the book could be said to understand it. Largely the concern is about what kind of mental structures are being built and what structures must have been built by reading the previous half of the book for the passage to do what it does in the mind of the reader.

Without further ado, let us jump into the quote, which starts at the beginning of a paragraph:

“It was a true solar-plexus blow,”

There are two sources for the comprehension of this clause. First is the preceding paragraph, where a fight is described. A scene and script have been built up, like a movie in the mind. In particular, one man is holding a girl (who is struggling to escape) and another is trying to tie her feet. She kicks the second man, and that is the blow that’s being referred to.

Unlike a cinematic movie, however, much that would be evident on the screen has been left out. The specific positions of the bodies, the clothing in some cases, and many aspects of the background have been left to the imagination. In other words, the “movie” is a sequence of abstractions.

It is in no sense simply a pile of predicates, however. When I read this, I come away with a semi-visual motion script, such as could be used to orchestrate a re-enactment by action-figure dolls, even though the text doesn’t come close to specifying the actual positions or motions I imagine.

The second source is the reader’s memories of pertinent experiences, either of watching fights or having been in them. In the multi-level abstraction structure that’s being built, by and large, at least in the hands of a skillful writer, the things that get mentioned are the things that you’d pay attention to if watching the scene. It’s well established, for example in studies of eyewitness acounts in criminology, that people confabulate what happens between such points in their memory of actual events, much less from verbal stories. So to that extent, the structure of a story reflects that of memory.

If you’ve ever taken a hard blow to the solar plexus, you’ll have a much deeper understanding of this passage than someone who hasn’t. I have, and the sensation is unique; nothing else in my experience feels the same or has the same effects. If you have, note that among the few descriptions of clothing that were provided was that the girl was wearing riding boots.

At a higher level, the scene is part of an attempted abduction of the girl by the men. On this level, the reader is on tenterhooks to discover whether the abduction will succeed, given the girl’s spirited and at least partially efficacious resistance.

“and completely knocked out,”

Syntactically, this is a bit of a garden path; we expect it to be a conjunct of the previous predicate until we see the comma. It turns out to be a participle introducing the second clause. It appears to be for the benefit of those readers who have not experienced solar plexus blows. It describes the effect well enough to follow the action sensibly, but doesn’t really capture the experience.

This points out that there can be different amounts of actual understanding going on in different readers each of whom would claim to have understood the passage: there can be ties to emotions, sensations, memories, and/or mental models in various combinations and strengths.

“Perkins staggered back against the instrument-board.”

Perkins is the second man, and his staggering back is completely predictable from the description of the action so far. In fact, it’s predictable that staggering back is part of the process of his collapsing, which isn’t, and doesn’t need to be, stated explicitly. The ability to predict is one of the key elements of understanding, so we can propose that there is a model of collapsing after being knocked out (or struck in the solar plexus) that abstracts away from any particulars about the individual (or his specific position) that allows the extrapolation of the “movie,” if need be.

It’s the instrument-board that is the new item. In order to understand this, the reader has to pull into play a much broader background structure than heretofore. The action is taking place in the control room of a spaceship, and the “instrument-board” is its control panel. One is reminded of a programming language variable being looked up in a containing context after being found unbound in the local one.

“His outflung arm pushed the power-lever out to its last notch,”

Now we see that there are multiple disconnected levels of abstraction, as well as disconnected items of physical description, that need interpolation. We hear about the arm and the lever, which is local and concrete. We can imagine an arm striking a lever and pushing it. We still don’t know anything about how big the board is, where the lever is on the board, whether the board is horizontal, vertical, or tilted. We don’t know where Perkins is with respect to the pilot’s (and co-pilot’s?) seat(s). On the other hand, we do know much higher-level things about control panels, and power levers (I, for example, call to mind typical airplane cockpits as well as the spaceship control rooms in SF movies I’ve seen.) Although various things about the spaceship have been mentioned before in the book, no good description of the control room has been given; we have to assemble this as some useful level of abstraction as we read this passage.

“throwing full current through the bar,”

This is the key development, not only of the passage, but of the entire book. Note that without the model that the reader will have built up by that point, the phrase means virtually nothing. You might well think that there is a place where drinks are served on the ship. 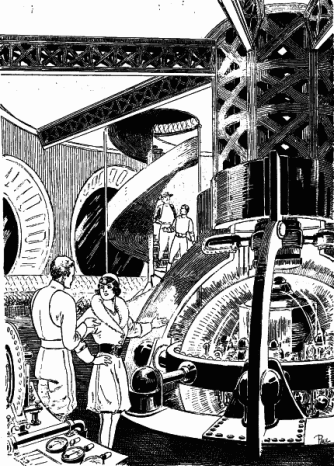 The book is, as the perspicacious reader will have guessed, E. E. Smith’s 1928 space opera classic Skylark of Space, and its premise is that a bar of copper plated with a (fictional) transuranic metal can convert its mass to pure kinetic energy with the application of a current. The bar is the drive motor of the spaceship. As far as I know, there’s no other context, even in science fiction, where the motor of any vehicle is referred to as a bar. It certainly doesn’t happen in reality, and will not have been the case in any reader’s experience. Many of us have seen bars of copper, and to that extent the symbol is “grounded;” but in the salient sense of the story it is not. Its meaning comes completely from the model that has been built up out of pure words. (In simple terms, no AI with a static, pre-programmed ontology will be able to understand this century-old kids SF adventure story at even the most pedestrian level.)

The really remarkable thing about this phrase is that it throws implications across virtually every level at which the book is to be understood.

At the physical level, it describes the closing of a circuit and the application of voltage to a piece of metal.

At the technological level, using the (fictional) understanding of space drives built up before, that means that the ship will be placed under very heavy acceleration.

Back at the physical bodies level in which we were understanding the fight before, it means that the parties will be thrown to the floor and unable to move.

The fight will be at least suspended. At something closer to the plot level, the parties, pinned to the floor by acceleration, will be unable to stop the ship until the fuel runs out, stranding them far away in space.

This converts them from abductors and victim, where the conflict is all interpersonal, to fellow lifeboat passengers facing a common doom. There is room for various character development as they adjust to the shift in circumstances.

In a larger context, from the outside it will seem as if the abduction succeeded. This will force the girl’s fiance to give chase in his own spaceship (already a hackneyed plot by 1928, to be sure, but thereby all the more predictable for the reader).

But the fact that the ship will fly at top acceleration until its fuel is exhausted implies that the succeeding action will be far-removed from the familiar terrestrial scenes it has taken place in so far. In fact it converts the story from one of personalities and struggle in familiar circumstances (a la the Illiad) to a true voyage of the imagination (like the Odyssey).

If you are want to understand things deeply, you typically want to call in comparable things which can illuminate them by analogy. In this case the arm on the lever is like the tornado in Wizard of Oz (or of course the storm in the Odyssey); it not only throws the protagonists into a strange new world, but motivates their subsequent adventures with the quest to get home.

There is NO knowledge representation and inference scheme in the NLP field today that has even a snowball’s chance of capturing all this. But a human reader with a good grounding in the classics can see that this sentence is the turning point and spark of the whole book on something like five different levels simultaneously.

That’s quite a kick.

“… which was pointed straight up as it had been when they made their landing.”

In something of an anticlimax, Smith is keeping the reader up to date with the physical model of the ship, just in case someone wonders why, having gone down to land, it didn’t keep going down when the juice was turned back on. It had come down backwards, hanging on its thrust. Yet another model — and level of abstraction.