– Kate Sills is a software engineer with an interest in economics and law. She has been a columnist for the Cato Institute and was previously a board member of the Tezos Commons Foundation. She graduated from the University of California at Berkeley with a degree in Computer Science.

– How can we create a bookchain based system for property rights?

In the US legal system, a distinction is made between contract law and property law.

Contract law is extremely permissive: parties can make contracts about pretty much anything that concerns just those parties.

Example: Michael Jordan notably had a “Love of the Game” clause in his NBA contract that allowed him to play basketball outside of the NBA in the off-season, something usually prohibited in player contracts for fear of injury.

Property law is much more limited, in large part due to the fact that property law affects large undefined swaths of people, often everyone not specifically mentioned in the contract.

Example: If I made a deal with Michael Jordan that he can play basketball on my property even after I sell it, that’s not enforceable in court because the contract doesn’t survive the transfer of ownership.

New forms of property or new ways of dealing with property create costs for people who didn’t sign that contract.

In a blockchain context, new possibilities for property appear. 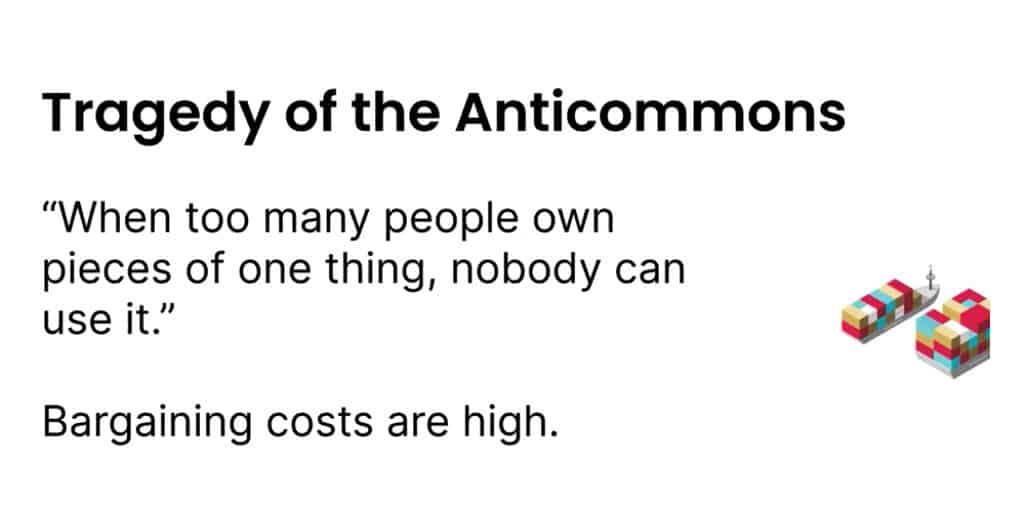 This interesting development introduces a problem though: The Tragedy of the Anti-commons

With smart contracts we can design tokens to prevent these sorts of situations using mechinisms like tokens that expire, multisignature access, etc.