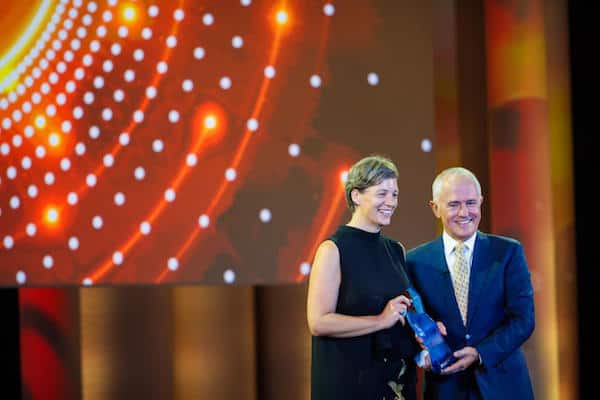 UNSW Sydney scientist Professor Michelle Simmons, the 2018 Australian of the Year, is presented with her award by the Australian Prime Minister Malcolm Turnbull. CREDIT: Salty Dingo

UNSW Sydney congratulates Scientia Professor Michelle Simmons, who has been named 2018 Australian of the Year in recognition of her pioneering research and inspiring leadership in quantum computing.

Simmons, who is a UNSW Professor of Physics and Director of the Australian Research Council Centre of Excellence for Quantum Computation and Communication Technology, CQC2T, based at UNSW, received her award from the Australian Prime Minister, Malcolm Turnbull, at a ceremony at Parliament House in Canberra.

As Centre Director, she leads a team of more than 200 researchers at eight Australian universities who are developing a suite of technologies for quantum computing, information storage and communications.

Professor Simmons’ research group is the only one in the world that can manipulate individual atoms to make atomically precise electronic devices. Her team at CQC2T is leading the world in the race to develop a quantum computer in silicon.

Last year, she also established Australia’s first quantum computing company, bringing together representatives of governments, industry and universities in a unique $83 million consortium based at UNSW to develop and commercialise the Centre’s world-leading research.

UNSW President and Vice-Chancellor Professor Ian Jacobs said: “Michelle is highly deserving recipient of this great honour and will be a wonderful role model for all Australians.

“With her scientific vision, she has established UNSW and Australia as an international leader in a key industry of the future – quantum computing – that will revolutionise most other industries.

“And she has worked tirelessly to ensure this nation will benefit economically and socially from the commercialisation of her team’s great Australian research,” Professor Jacobs said.

UNSW Dean of Science Professor Emma Johnston said: “Michelle is a pioneering scientist with a passion for pushing the boundaries which has allowed her to overcome immense technical barriers in her quest to understand how the world operates at the atomic level and then exploit this knowledge to create the quantum computers of the future.

“Her achievements and those of her team are hugely exciting for UNSW and for Australia and she is an inspiration to all young people — and women in particular — who aspire to make a difference in the world.

“Although Michelle’s work is conducted at the very smallest scale, its consequences will be enormous,” Professor Johnston said.

Professor Simmons said: “I am deeply honoured to receive this award and hope the recognition will inspire other Australians to tackle the hard challenges in life.

“Trying to control nature at its very smallest scale is phenomenally exciting and rewarding, and has been my passion for many years.

“Building a fully functioning prototype quantum computer in silicon is a massive task. But I have an excellent team with the dedication and determination to make it happen, and this award is also a wonderful recognition of their immense efforts.”

She said the Australian give-it a go attitude, the academic freedom to pursue ambitious projects and new ideas, and the collaborative culture had contributed to her success.

“I firmly believe there is no better place to undertake research than in Australia,” Professor Simmons said.

Simmons’ advice to young men and women reflects the many insights she has gained on her journey to the top: “Keep your sights high, defy others’ expectations, and be the creators, rather than just the users, of new technology,” she said.

Among their recent achievements, Simmons’ research group created the world’s first single-atom transistor, as well as the narrowest conducting wires ever made in silicon, just four atoms wide and one atom high.

Quantum computers are expected to transform most industries, including health, finance and transportation. Instead of performing calculations one after another, like a conventional computer, a quantum computer would work in parallel and be able to look at all the possible outcomes at the same time.

“A quantum computer would be able to solve problems in minutes that would otherwise take thousands of years,” says Simmons.

The UNSW approach has been to focus on making qubits out of single atoms of phosphorus or quantum dots in silicon — the material that forms the basis of today’s computer chips.

Silicon has several advantages including that it is amongst the most stable and manufacturable environments in which to host qubits, due to trillions of dollars of investment in R&D by the computer and electronics industry.

Launched last year and operating out of new laboratories at UNSW, the new company called Silicon Quantum Computing Pty Ltd has set itself the target of producing a 10-qubit integrated circuit prototype in silicon by 2022, as the forerunner to a silicon-based quantum computer.

Simmons is one of the few Australian academics to have been awarded two Australian Research Council Federation Fellowships and currently holds a Laureate Fellowship.

She has won both the Australian Academy of Science’s Pawsey Medal (2005) and Thomas Ranken Lyle Medal (2015) for outstanding research in physics, and was elected one of the youngest Fellows of the Academy in 2006. She was named NSW Scientist of the Year in 2012, and in 2015 she was awarded a Eureka Prize for Leadership in Science.

She received a Foresight Institute Feynman Prize in Nanotechnology in 2016, for “the new field of atomic electronics, which she created”. Last month she was honoured as a pioneer in quantum computing by the American Computer Museum, alongside Mark Ritter from IBM. And last year she received a €100,000 international L’Oréal-UNESCO For Women in Science Award.

She had the rare distinction for an Australian researcher of becoming an elected member of the prestigious American Academy of Arts and Sciences in 2014. She is also Editor in Chief of the first Nature Partner Journal based in Australia, npj Quantum Information.

As someone who has been cheering the progress of nanotechnology toward general purpose, high-throughput atomically precise manufacturing (APM) since reading Engines of Creation in 1986, two questions have seemed to me to be of paramount importance: (1) which of today’s methods of building atomically precise nanomachines will have a place on paths toward nanofactories; (2) what will be the earliest industries to become extremely lucrative making use of first generation molecular machine systems, and thus ignite an industrial revolution based upon APM? Could the development of quantum computing and communication be such an industry?
—James Lewis, PhD