Ultrafast DNA robotic arm: A step toward a nanofactory?

Ultrafast DNA robotic arm: A step toward a nanofactory? 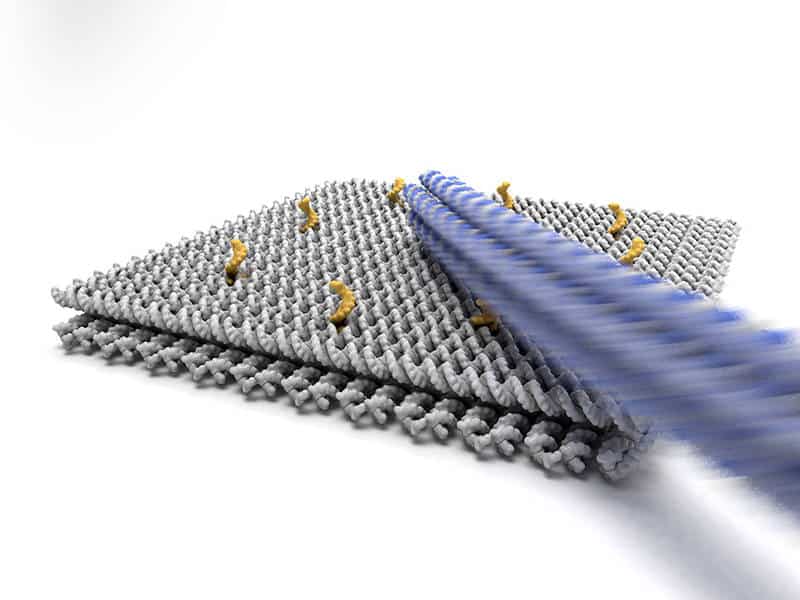 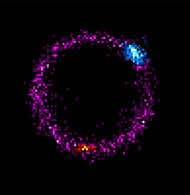 Ultrafast molecular machines made using DNA nanotechnology have now been demonstrated. Over the past several years molecular machines made using DNA nanotechnology, especially the scaffolded DNA origami technology, have grown more complex and more functional (see, for example, here, here, here, and here). Long-time Foresight member Dr. Robert P. Meagley writes to point out that the speed of such machines increased five orders of magnitude with a new approach published last week, and to point out that it “would be fun to put a fragment of this stuff” (an antenna-reactor complex published 18 months ago) “on the end of” such a DNA machine. Could such a combination evolve into a path toward general purpose, high-throughput atomically precise manufacturing? From the Technical University of Munich “Piecework at the nano assembly line“:

Scientists at the Technical University of Munich (TUM) have developed a novel electric propulsion technology for nanorobots. It allows molecular machines to move a hundred thousand times faster than with the biochemical processes used to date. This makes nanobots fast enough to do assembly line work in molecular factories. The new research results will appear as the cover story on 19th January in the renowned scientific journal Science [Abstract].

Up and down, up and down. The points of light alternate back and forth in lockstep. They are produced by glowing molecules affixed to the ends of tiny robot arms. Prof. Friedrich Simmel observes the movement of the nanomachines on the monitor of a fluorescence microscope. A simple mouse click is all it takes for the points of light to move in another direction.

“By applying electric fields, we can arbitrarily rotate the arms in a plane,” explains the head of the Chair of Physics of Synthetic Biological Systems at TU Munich. His team has for the first time managed to control nanobots electrically and has at the same time set a record: The new technique is 100 000 times faster than all previous methods.

DNA-Origami Robots for the Manufacturing Plants of Tomorrow

Scientists around the world are working on new technologies for the nanofactories of the future. They hope these will one day be used to analyse biochemical samples or produce active medical agents. The required miniature machines can already be produced cost-effectively using the DNA-origami technique.

The only reason these molecular machines have not been deployed on a large scale to date is that they are too slow. The building blocks are activated with enzymes, strands of DNA or light to then perform specific tasks, for example to gather and transport molecules.

However, traditional nanobots take minutes to carry out these actions, sometimes even hours. Therefore, efficient molecular assembly lines cannot, for all practical intents and purposes, be implemented using these methodologies.

“Building up a nanotechnological assembly line calls for a different kind of propulsion technology. We came up with the idea of dropping biochemical nanomachine switching completely in favour of the interactions between DNA structures and electric fields,” explains TUM researcher Simmel, who is also the co-coordinator of the Excellence Cluster Nanosystems Initiative Munich (NIM).

The principle behind the propulsion technology is simple: DNA molecules have negative charges. The biomolecules can thus be moved by applying electric fields. Theoretically, this should allow nanobots made of DNA to be steered using electrical impulses.

Robotic Movement Under the Microscope

To determine whether and how fast the robot arms would line up with an electric field, the researchers affixed several million nanobot arms to a glass substrate and placed this into a sample holder with electrical contacts designed specifically for the purpose.

Each of the miniature machines produced by the lead author Enzo Kopperger comprises a 400 nanometer arm attached to a rigid 55 by 55 nanometer base plate with a flexible joint made of unpaired bases. This construction ensures that the arms can rotate arbitrarily in the horizontal plane.

In collaboration with fluorescence specialists headed by Prof. Don C. Lamb of the Ludwig Maximillians University Munich, the researchers marked the tips of the robot arms using pigment molecules. They observed their motion using a fluorescence microscope. They then changed the direction of the electric field. This allowed the researchers to arbitrarily alter the orientation of the arms and control the locomotion process.

“The experiment demonstrated that molecular machines can be moved, and thus also driven electrically,” says Simmel. “Thanks to the electronic control process, we can now initiate movements on a millisecond time scale and are thus 100 000 times faster than with previously used biochemical approaches.”

On the Road to a Nanofactory

The new control technology is suited not only for moving around pigments and nanoparticles. The arms of the miniature robots can also apply force to molecules. These interactions can be utilized for diagnostics and in pharmaceutical development, emphasizes Simmel. “Nanobots are small and economical. Millions of them could work in parallel to look for specific substances in samples or to synthesize complex molecules – not unlike an assembly line.

So what kind of tools could a speedy nanoarm deploy to build complex structures? Mechanical force, as suggested above, is certainly one possibility. Another possibility, however, is the suggestion above by Dr. Meagley to place one or more antenna-reactor complexes at the tips of nanomachine arms to implement a series of spatially directed plasmon-enhanced photocatalysis steps to build complex nanostructures. As described by this Rice University press release from July of 2016 written by Jade Boyd “Rice’s ‘antenna-reactor’ catalysts offer best of both worlds“:

In a find that could transform some of the world’s most energy-intensive manufacturing processes, researchers at Rice University’s Laboratory for Nanophotonics have unveiled a new method for uniting light-capturing photonic nanomaterials and high-efficiency metal catalysts. 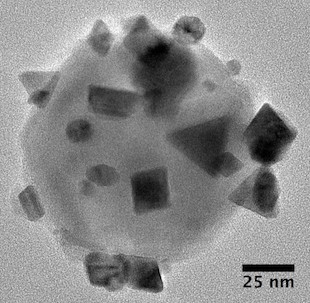 Each year, chemical producers spend billions of dollars on metal catalysts, materials that spur or speed up chemical reactions. Catalysts are used to produce trillions of dollars worth of chemical products. Unfortunately, most catalysts only work at high temperatures or high pressure or both. For example, the U.S. Energy Information Agency estimated that in 2010, just one segment of the U.S. chemical industry, plastic resin production, used almost 1 quadrillion British thermal units of energy, about the same amount of energy contained in 8 billion gallons of gasoline.

Nanotechnology researchers have long been interested in capturing some of the worldwide catalysis market with energy-efficient photonic materials, metallic materials that are tailor-made with atomic precision to harvest energy from sunlight. Unfortunately, the best nanomaterials for harvesting light — gold, silver and aluminum — aren’t very good catalysts, and the best catalysts — palladium, platinum and rhodium — are poor at capturing solar energy.

The new catalyst, which is described in a study this week in the Proceedings of the National Academy of Sciences, is the latest innovation from LANP, a multidisciplinary, multi-investigator research group headed by photonics pioneer Naomi Halas. Halas, who also directs Rice’s Smalley-Curl Institute, said a number of studies in recent years have shown that light-activated “plasmonic” nanoparticles can be used to increase the amount of light absorbed by adjacent dark nanoparticles. Plasmons are waves of electrons that slosh like a fluid across the surface of tiny metallic nanoparticles. Depending upon the frequency of their sloshing, these plasmonic waves can interact with and harvest the energy from passing light.

In summer 2015, Halas and study co-author Peter Nordlander designed an experiment to test whether a plasmonic antenna could be attached to a catalytic reactor particle. Graduate student Dayne Swearer worked with them, Rice materials scientist Emilie Ringe and others at Rice and Princeton University to produce, test and analyze the performance of the “antenna-reactor” design.

Swearer began by synthesizing 100-nanometer-diameter aluminum crystals that, once exposed to air, develop a thin 2- to 4-nanometer-thick coating of aluminum oxide. The oxidized particles were then treated with a palladium salt to initiate a reaction that resulted in small islands of palladium metal forming on the surface of the oxidized particles. The unoxidized aluminum core serves as the plasmonic antenna and the palladium islands as the catalytic reactors.

Swearer said the chemical industry already uses aluminum oxide materials that are dotted with palladium islands to catalyze reactions, but the palladium in those materials must be heated to high temperatures to become an efficient catalyst.

“You need to add energy to improve the catalytic efficiency,” he said. “Our catalysts also need energy, but they draw it directly from light and require no additional heating.”

One example of a process where the new antenna-reactor catalysts could be used is for reacting acetylene with hydrogen to produce ethylene, Swearer said.

Ethylene is the chemical feedstock for making polyethylene, the world’s most common plastic, which is used in thousands of everyday products. Acetylene, a hydrocarbon that’s often found in the gas feedstocks that are used at polyethylene plants, damages the catalysts that producers use to convert ethylene to polyethylene. For this reason, acetylene is considered a “catalyst poison” and must be removed from the ethylene feedstock — often with another catalyst — before it can cause damage.

One way producers remove acetylene is to add hydrogen gas in the presence of a palladium catalyst to convert the poisonous acetylene into ethylene — the primary component needed to make polyethylene resin. But this catalytic process also produces another gas, ethane, in addition to ethylene. Chemical producers try to tailor the process to produce as much ethylene and as little ethane possible, but selectivity remains a challenge, Swearer said.

Swearer said the potential energy savings and improved efficiency of the new catalysts are likely to capture the attention of chemical producers, even though their plants are not currently designed to use solar-powered catalysts.

“The polyethylene industry produces more than $90 billion of products each year, and our catalysts turn one of the industry’s poisons into a valuable commodity,” he said.

Halas said she is most excited about the broad potential of the antenna-reactor catalytic technology.

“The antenna-reactor design is modular, which means we can mix and match the materials for both the antenna and the reactor to create a tailored catalyst for a specific reaction,” she said. “Because of this flexibility, there are many, many applications where we believe this technology could outperform existing catalysts.”

Whatever the potential for combining ultrafast molecular machines with plasmonic antennas and catalytic reactors, the metallic nanoparticles used by Halas and her collaborators could be supplemented with a variety of other, often atomically precise, plasmonic antennas and catalysts. How diverse a collection of components have we accumulated for use in possible proto-nanofactories?
—James Lewis, PhD