Atomically precise location of dopants a step toward quantum computers

Atomically precise location of dopants a step toward quantum computers 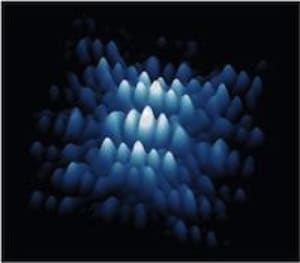 An STM image showing the atomic level detail of the electron wave function of a sub-surface phosphorus dopant. Through highly precise matching with theoretical calculations the exact lattice site position and depth of the dopant can be determined. Credit: University of Melbourne

A couple months ago we cited the demonstration of a quantum simulator with dopant atoms placed in silicon with atomic precision. The same Australian and New Jersey teams have since further advanced the prospects for tomorrow’s silicon-based quantum computers. A hat tip to Nanowerk for reprinting this University of Melbourne news release “World-first pinpointing of atoms at work for quantum computers“:

Scientists can now identify the exact location of a single atom in a silicon crystal, a discovery that is key to greater accuracy in the operation of tomorrow’s silicon-based quantum computers.

It’s now possible to track and see individual phosphorus atoms in a silicon crystal allowing confirmation of quantum computing capability but which also has use in nano detection devices.

Quantum computing has the potential for enormous processing power in the future. Your current laptop has transistors that use a binary code, an on or off state (bits). But tomorrow’s quantum computer will use quantum bits ‘qubits’, which have multiple states.

Professor Lloyd Hollenberg, at the University of Melbourne and Deputy Director of the Centre for Quantum Computation and Communication Technology, led an international investigation on the fundamental building blocks of silicon based solid-state quantum processors.

His collaborators Professor Sven Rogge and Centre Director Professor Michelle Simmons [winner of the 2015 Foresight Institute Feynman Prize, Experimental] at the University of New South Wales, obtained atomic-resolution images from a scanning tunneling microscope (STM) allowing the team to precisely pinpoint the location of atoms in the silicon crystal lattice.

“The atomic microscope images are remarkable and sensitive enough to show the tendrils of an electron wave function protruding from the silicon surface. The theory is now visible, this is a world first,’ said Professor Hollenberg.

Lead author of the paper recently published in Nature Nanotechnology [abstract, PDF made available by authors], Dr Muhammad Usman from the University of Melbourne said: ‘The images showed a dazzling array of symmetries that seemed to defy explanation, but when the quantum state environment is taken into account, suddenly the images made perfect sense.’

The teams from University of Melbourne, UNSW and Purdue University USA are part of the world-leading research at the Centre focused on the demonstration of the fundamental building blocks of a silicon-based solid-state quantum processor.