Atomically precise manufacturing as the future of nanotechnology

Atomically precise manufacturing as the future of nanotechnology 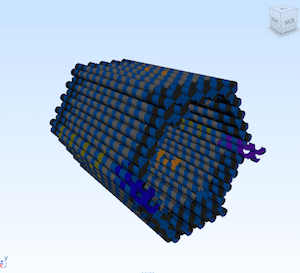 Continuing the theme of our previous post, is the idea of atomically precise manufacturing as the future of nanotechnology accruing credibility in the blogosphere? Over at Gizmodo Jamie Condliffe asks “What Will the Future of Molecular Manufacturing Really Be Like?“:

Molecular machines are nano-scale assemblers that construct themselves and their surroundings into ever more complex structures. Sometimes dubbed “nanotech” in the media, these devices are promising — but also widely misunderstood. Here’s what separates the science fact from science fiction.

The concepts that underpin this form of nanotechnology have certainly had long enough to percolate through modern science. Richard Feynman first speculated about the idea of “synthesis via direct manipulation of atoms” during a talk called There’s Plenty of Room at the Bottom. Looking back, that sparked much of the subsequent thinking about treating atoms and molecules more and more like simple building blocks.

Perhaps most famously, K. Eric Drexler considered the idea of taking the bottom-up manufacturing approach to its atomic extreme in his 1986 book Engines of Creation: The Coming Era of Nanotechnology. There, he posited the idea of a nan-oscale “assembler” that could scuttle around, building copies of itself or other molecular sized objects with atomic control; one which might in turn be able to create larger and more complex structures. A kind of microscopic production line, building products from the most basic ingredients of all. Coming when it did, in the mid-eighties, it felt very much like science fiction. …

As one example from Engines of Creation that felt like science fiction and elicited skepticism, Condliffe cites the grey goo scenario of runaway self-replicating nanorobots described in one chapter. He notes that nearly 30 years later no such dangers have appeared, but that scientists have created a multitude of “molecular-sized structures that can manipulate and assemble themselves, move, and even work together. … And there’s a rich pool of molecular machines, some inspired by nature, others by mechanical engineering principles, to show for it.” As primary example of such progress, he cites the host of accomplishments of DNA nanotechnology, pioneered by Nadrian Seeman of New York University. Indeed some of these DNA nanorobots have become quite complex. Another example of a novel molecular machine is the small molecule walker published by the Bayley group at Oxford University. Other examples of nano- and molecular machinery include the fastest nanomotor and the smallest nanocar, with wheels driven by electron tunneling. Among advances that might justify hope for the nanoscale production line that Drexler envisions, Condliffe offers these reports that we’ve covered here: DNA-based ‘robotic’ assembly begins and artificial molecular motor controls molecular transformation. Condliffe concludes:

Molecular machines are being used in labs the world over to tweak and assemble other molecules, creating larger assemblies that can be used for another purpose. …

In other words: we’re getting there. But instead of the primordial stew of nanobots producing grey goo, the reality of the molecular building site is a more nuanced, structured and modest one. Perhaps its no surprise that Drexler himself has tweaked his own hypothesis about the future on nanotechnology. In his 2013 book Radical Abundance, he writes about “microblocks.” These, he suggests, are a kind of Russian Doll assembly process, where a cascade of thousands of tiny robotic cells each builds components at the molecular level, feeding those components to increasingly larger robots until a full-size product is created. You can imagine it as a series of ever larger 3D printers, the first working at the molecular level, each creating components to pass up to the chain, to create larger and larger structures.

Of course, with that kind of increasingly complexity comes greater challenge—but given the distance we’ve come, such obstacles shouldn’t be seen as too daunting. “Life itself is not possible without the multitude of molecular machines inside our bodies that work in turbulent environments and with very little power but accomplish very complex tasks from virus transport to muscle flexing,” explains Professor Charles Sykes from the Department of Chemistry at Tufts University. “Many wonderful things are possible as nature has already proven.” Indeed, as academics see it, there’s only a single real barrier. “The key constraint is the usual one,” muses Seeman. “Money.”

Really, then, the revelatory ambitions of the eighties assemblers have simply mellowed. Rather than scuttling around making—or destroying—at will, the molecular machines of the near future will be ordered, constrained and working for us rather than in competition. Rather less alarmist, and rather more useful. And that, it seems, is what happens when science fiction becomes more like science fact.

For those interested in the evolution of thought from assemblers and grey goo to nanofactories and APM, here are some key developments. By several years after Engines of Creation was published, it was clear to Drexler and others that nanofactories would be the simplest and most efficient implementation of atomically precise manufacturing, that self-replicating assemblers were neither necessary nor desirable, and that deliberate misuse of advanced nanotechnology was a much greater danger than the grey goo scenario. This transition in Drexler’s thinking was clearly completed by the publication in 1992 of Nanosystems: Molecular Machinery, Manufacturing, and Computation in which Chapter 14 describes an “exemplar manufacturing system”. Nevertheless by the turn of the century, when public interest in nanotechnology sparked by Engines of Creation, renewed interest in the Feynman vision describing molecular machines building with atomic precision, and impressive progress in several areas of nanoscale science and technology (see “A Short History of Nanotechnology“) led to calls for a US National Nanotechnology Initiative, several leaders of the nanoscale science and technology community were actively distancing themselves from the call for developing atomically precise manufacturing by pointing to descriptions of assemblers and grey goo in Engines of Creation that had long since been revised. In an article published in 2004 in the Bulletin of Science, Technology & Society and available on his web site—From Feynman to Funding—K. Eric Drexler describes and analyzes the controversies that arose from differing views of nanotechnology. Chris Phoenix and Eric Drexler collected arguments against assemblers and for nanofactories in a paper titled “Safe exponential manufacturing” and published by the journal Nanotechnology in 2004. The full text is available as a PDF courtesy of the Center for Responsible Nanotechnology. Some other milestones on the road to establishing the feasibility of atomically precise manufacturing are listed here.

With increasing acceptance of the feasibility of atomically precise manufacturing (often referred to in previous discussions as molecular nanotechnology, molecular manufacturing, or productive nanosystems) catalyzed by the publication of Radical Abundance, the questions become about how and when. How far can current applications of nanoscale science and technology advance by incremental advances in materials science, chemistry, and biotechnology? When will general purpose, high throughput, atomically precise manufacturing be necessary for further advances in applications? How can this capability be developed, and how long will it take? To encourage workers in various major application areas of nanotechnology to focus on long-term prospects for revolutionary advances, Foresight has begun a series of invitation-only workshops on directed/programmable matter, beginning in September 2014 for energy storage, transmission, and generation. In Chapter 14 of Radical Abundance, Drexler argues for the importance of roadmaps in accelerating progress toward complex and difficult technical goals. From 2005 through 2007, Drexler helped lead an effort by Battelle Memorial Institute and Foresight Institute, sponsored by the Waitt Family Foundation, Sun Microsystems, and Zyvex Labs, to produce the Productive Nanosystems Technology Roadmap. This was a start in the right direction, but given the enormous progress in the molecular sciences and other relevant technology during the past eight years, described above and by Drexler in Radical Abundance, an update is overdue. I have to add my musing to Seeman’s above—the key constraint is usually money.
—James Lewis, PhD